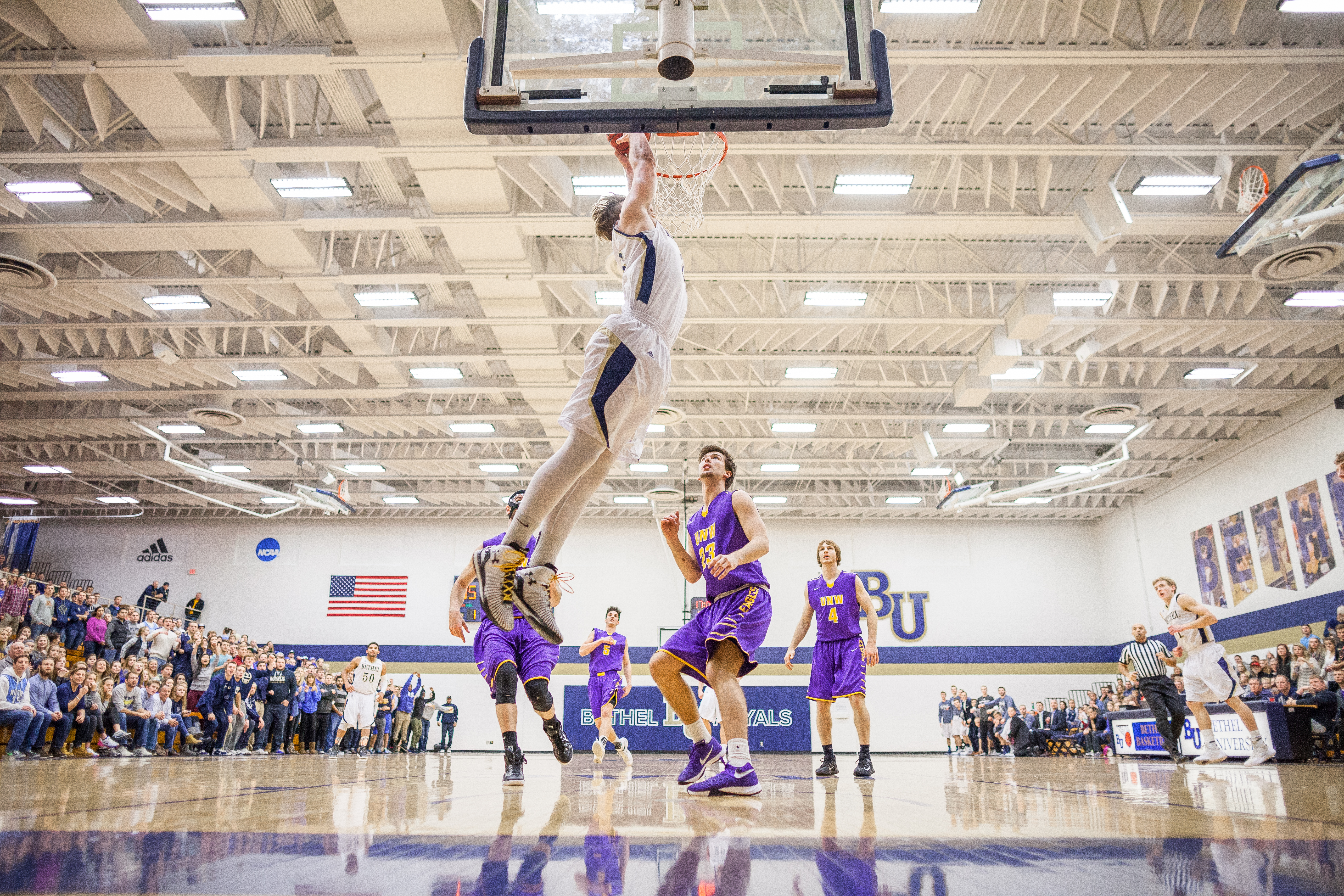 The moment a child utters its first words can be an endearing moment for any parent. Not only is this considered a communication milestone for little ones as they absorb all the information their new world provides them, but it is also just flat out adorable. Just ask any loving parent what their child’s first words were and the memory will come to them quicker than the world record for the fastest diaper change.

So when the infantile and current freshman player for the Bethel men’s basketball team, Derek Magnuson, shared his first words with his parents, he could have gone with textbook words like “Mama” or “Dada”, but he had more important things to say.

It turns out baby Derek may have been foreshadowing how the first six games of his college career would go. Because right now, giving him the “ball” and letting him “shoot” means that there is a good chance of it going in the “hoop.”

Through six games, Magnuson has already put up numbers that rival with some of the best MIAC players have to offer. The transfer freshman has started in all six games and is currently top-10 in the conference in points per game (15.5), field goals per game (7.2), rebounds per game (7.3), offensive rebounds per game (3.5) and blocks per game (0.8). He’s also on pace to break Steve Johnson’s 1997 single season field goal percentage record (60.8) with a percentage of 64.2. All of those stats currently lead the team, which is off to its first 6-0 start since the 2005 season.

Magnuson’s start is a reminder of the impact freshmen have had over the last three seasons. In 2014, Brycen Wojta was fourth in the MIAC in points and was top-10 in points per game and assists per game. The next season in 2015, Bridgeport Tusler finished top-10 in points per game and led the conference in steals per game. Both were freshmen; both were selected to the All-Freshman and All MIAC teams. If his stats keep up, then Magnuson will be considered for those very same awards.

“Derek’s intensity level makes him look like his head is going to explode,” Doug Novak, head men’s basketball head coach said. “He’s lowered his base and his center of gravity, and that’s what is making plays for him.”

Ever since he can remember, basketball has always been a part of the Magnuson’s life. Derek’s father, Don, is an avid fan and his mother, Mary Beth, played college ball at the University of North Dakota. One of his best memories is when Don bought Derek his first basketball hoop when he was three years old and from there, an appreciation for the game took off. But it wasn’t until after his freshman year of high school that Derek began taking basketball more seriously after working with trainers, attending camps and playing for the Minnesota Fury, an elite traveling program in the spring and summer.

After graduating from Roseville High School in 2014 and earning All-North Suburban Conference honors as a senior captain, Magnuson enrolled at the University of Minnesota-Duluth and joined the men’s basketball team on a scholarship. He redshirted his first year because another player returned on a medical redshirt, meaning he wasn’t going to see time on the court. Magnuson was also keen on playing professionally in Europe, so he decided a fifth year of development would help him increase his chances of attracting a team. But after his first year of college, he wasn’t satisfied with his experience academically and socially.

“I didn’t enjoy the academics of UMD. I don’t do very well in lecture halls,” Magnuson said. “It was also very common to drink a lot, and being a student-athlete, that was just something I didn’t really wanted to be around.”

After doing some soul searching and talking it over with family and friends, Magnuson reached out to Wojta about possibly playing for Bethel and, after speaking with head coach Doug Novak, decided to transfer.

“Coach Novak was huge part in it,” Magnuson said. “I remember him telling me that if I didn’t end up coming here, then that’s fine as long as I was happy. That was something other coaches didn’t tell me. That was the difference-maker for deciding where I wanted to go.”

Magnuson immediately felt a welcoming presence. In the classroom, he felt he was getting the attention he couldn’t have in Duluth. On the court, he felt welcome by his teammates and is humbled by his role on the team despite not being with the program for that long. But Magnuson’s arrival has been more than a welcome sight for the coaching staff, especially because of his tenacity.

“He really concentrates on the growth of his game and being able to play with others,” Novak said. “Each day, he continues to make strides and he shows it in practice. It’s an everyday occurrence with him.”

Having had time to adjust to a new school and a new team, Magnuson appears to have found a home where he can thrive academically, socially and in continuing to develop as a player. If he continues to play the way he is, not only will Magnuson be an anchor on this team for the next three season, but the next words he might have to learn next are “2016 Joe Hutton Player-of-the-Year Award.”

0 comments on “The New Big Man on Campus”