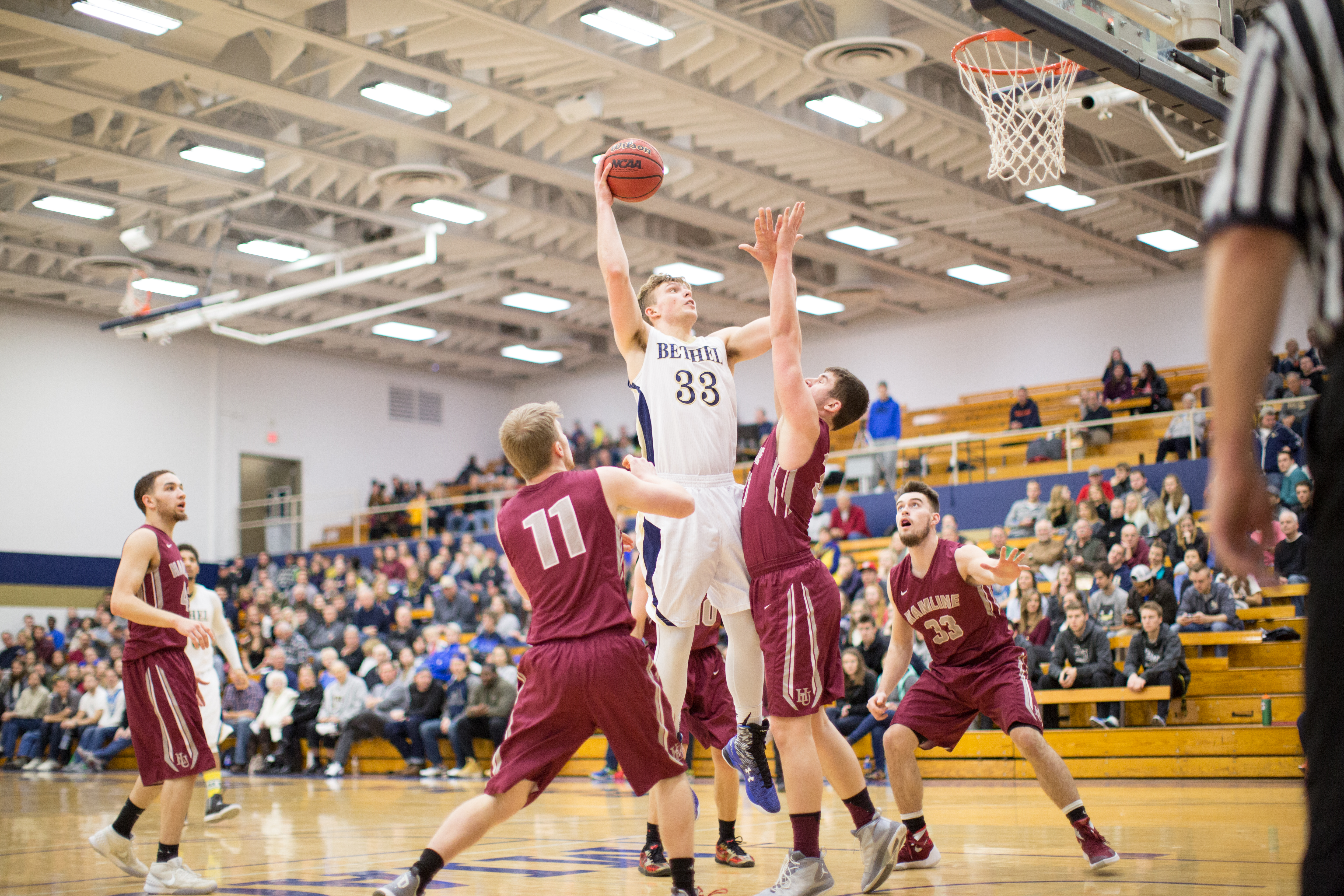 With the Bethel Royals men’s basketball team coming off of their first home loss in nearly a year, and second loss in a row, they hosted the Hamline Pipers at the Robertson Center gymnasium. Hamline came into the game in the midst of an 8-game losing drought.

“[We can’t] let it get more than that. We need to finish better,” Bethel head coach Doug Novak said.

Bethel started the scoring with a Trevor Hall lay-up. The game remained tight throughout the first 8 minutes. Knotted up at 17 apiece, Hamline head coach Jim Hayes called their first timeout with 11:37 to go in the first half. The Royals began to build a lead after the timeout, going up by six with 6:52 left. Bethel big man Tim Hanson nailed a three, his second make from downtown this season, to force another Pipers’ timeout with 5:10 remaining. Senior Jared Nelson closed the scoring in the first half with his own three-pointer. Teams headed down into the locker room with the score 51-35 in favor of the home team.

Sophomore Zach Smith and freshman Connor Knutson led the way for Hamline at the break, scoring 10 apiece. Leading the offensive attack for the Royals with 12 points each were Hall and freshman forward Derek Magnuson.

Knutson got things going in the second half, opening up with a three for Hamline, but Bethel continued to pull away. Nelson nailed his fourth shot from downtown with 13:53 left in the game to put the Royals up 69-45. Bethel went up by 30 with a Bridgeport Tusler three with 7:58 on the clock. Both teams began reaching to their benches and subbing out starters. Senior Sean Baumgarn hit a three to put the team up 94-60 with just under four-and-a-half to go, and finished off all scoring with yet another deep ball, putting the home team up 104-66.

Magnuson and Knutson led all scorers with 17. Zach Smith added 15 for the Pipers. Hall, Nelson, Tusler and Tim Hanson all finished in double figures. The Royals shot 66.7% from the floor; Hamline shot 49%.

With his team’s losing streak now at nine games, Piper starting center Herbert Tarpeh, who finished with 2 points, 1 rebound, and an assist.

“Things we need to get better,” Tarpeh said. “[We need to] come back Monday and get better.”

Following the win, Bethel is now 11-3 overall, with a 6-3 mark in the MIAC standings, while Hamline falls to 3-10 (1-7). The Royals head to Northfield next to take on Carleton on Wednesday. The Pipers finish the regular season hosting St. Mary’s.