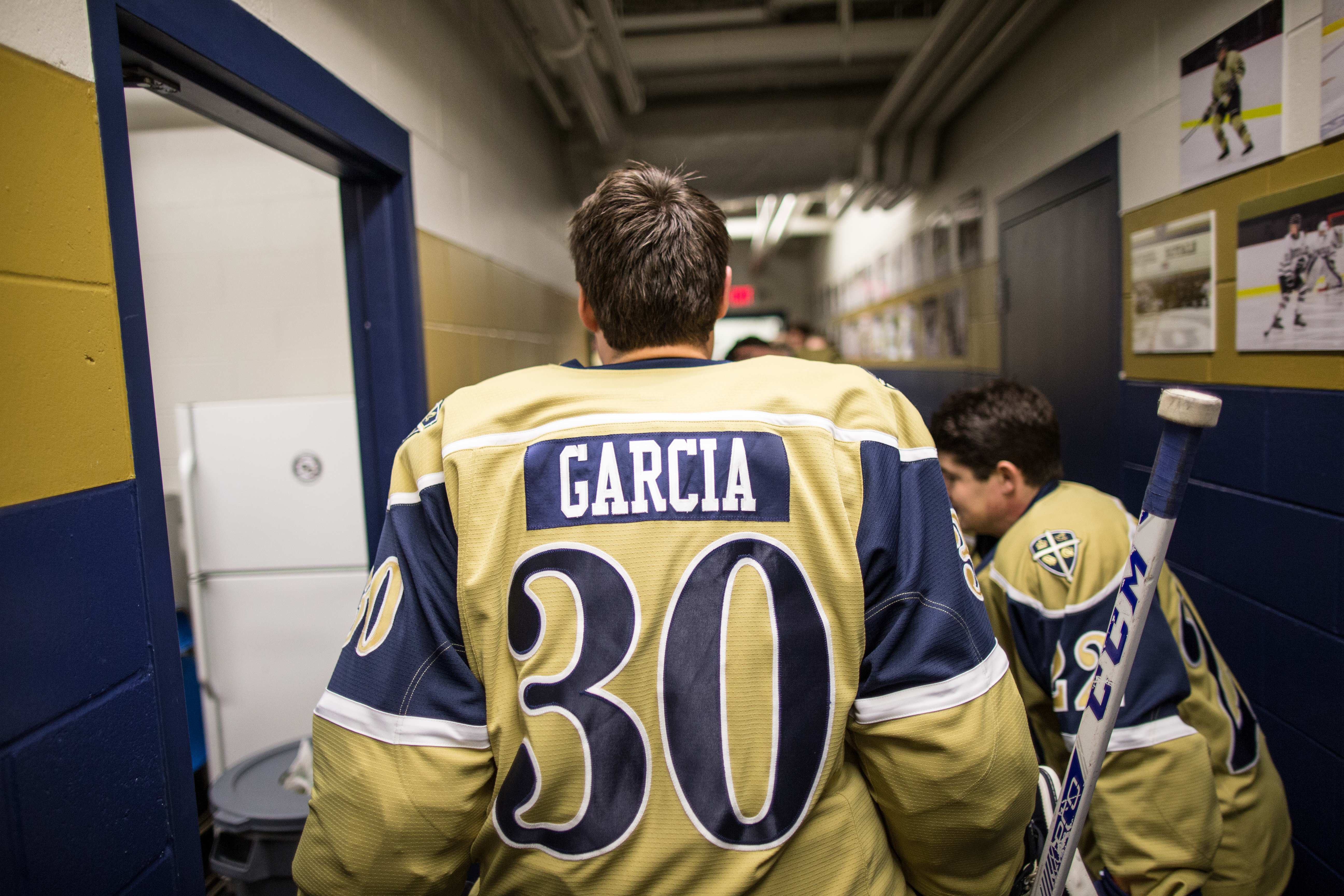 Goaltender uses the memory of his father to propel him toward the future.

Jesse Garcia IV wanted a treat after a February practice in 2015, so he drove to a Mc

Donald’s near Armadillo Deck Rink in Sauk Rapids, Minnesota. Garcia IV played goalie for the Granite City Lumberjacks of the NA3HL. He was waiting in line at the drive thru after ordering a hot chocolate when his phone started ringing.

He was right. Jesse Garcia III’s appointment did not go well.

She told Garcia IV to go his father’s house in Maplewood as soon as possible. As he rushed back to his apartment, he grabbed enough clothes to be able to stay a few days.

He spent the 90-minute drive thinking about his dad. He thought about the smaller things they did together, like playing catch in the backyard, watching movies and spending time at his Aunt Monica’s house.

He thought about Garcia III’s job as a Minneapolis Police sergeant where he’d done everything from the SWAT team to public information to working security at the same Minnesota Vikings’ games where they sat at field level, cheering on their favorite team.

He thought about Garcia III’s upbeat personality and the support he received from him. If his dad wasn’t waving signs in the audience of Garcia IV’s hockey games, he always called to hear the details of every play.

There had been signs that Garcia III’s health was declining over the last few weeks. He was feeling full while eating less and stomach pains surfaced. He went to see a gastroenterologist, who found nothing. But his symptoms worsened.

His first few times on the ice after that night, Garcia would break down, overcome with tears of frustration.

When he reached Maplewood, he remembers Garcia III trying to keep the conversations cool and casual like he always did. They talked about junior hockey and deeper topics like how much he admired his son and how he wanted him to maintain a relationship with his newborn half-sister, Vienna.

Eventually, he got to the point.

Garcia III was checked in to the Mayo Clinic Cancer Center days after his diagnosis. While his dad began chemotherapy, Garcia IV went back to St. Cloud.

His first few times on the ice after that night, Garcia would break down, overcome with tears of frustration. It wasn’t until he played competitively that a sense of normalcy returned. The games distracted him, allowing him to tune out everything else and just play hockey.

In his first game after the diagnosis, Garcia IV stopped 25 of 27 shots faced and got the win versus the Twin City Steel, 3-2.

Garcia IV’s 2015 statistics for the Lumberjacks were good enough to earn him the West Division Goaltender of the Year award and a spot on the All-West Division Team.

Garcia IV committed to play hockey for Bethel University and enrolled in the fall of 2015. He was also invited to participate in the 2015 NA3HL Top Prospects Tournament in Ann Arbor, Mich. Because of his deteriorating health, Garcia III was unable to cheer on his son in person.

Over the course of the next few months, Garcia III experienced drastic weight loss and trouble keeping food down, but remained positive that he would be beat the disease. By the summer months, the cancer began to stop responding to treatments. He remained positive.

By the end of July, Garcia III was put into hospice care at home where he would be comfortable.

On July 30 at around one in the morning, Garcia IV was woken up by his aunt.

Jesse Zepeda Garcia III passed away surrounded by his loved ones. He was 48.

In his first season with the Royals, Garcia IV earned the starting job outright before the season. He made the most starts in net (14) and made the fifth most saves (441) in the MIAC.

He wishes his dad could’ve been there to see some of his first collegiate season but, every now and then, Garcia IV will see glimpses of him.

He sees him when he hears his police department friends and family members tell stories about him. He sees him in the way he carries himself and continues to be the person his dad wanted him to be.

Garcia IV sees his dad every time he hits the ice.

0 comments on “Saves for the Sergeant”