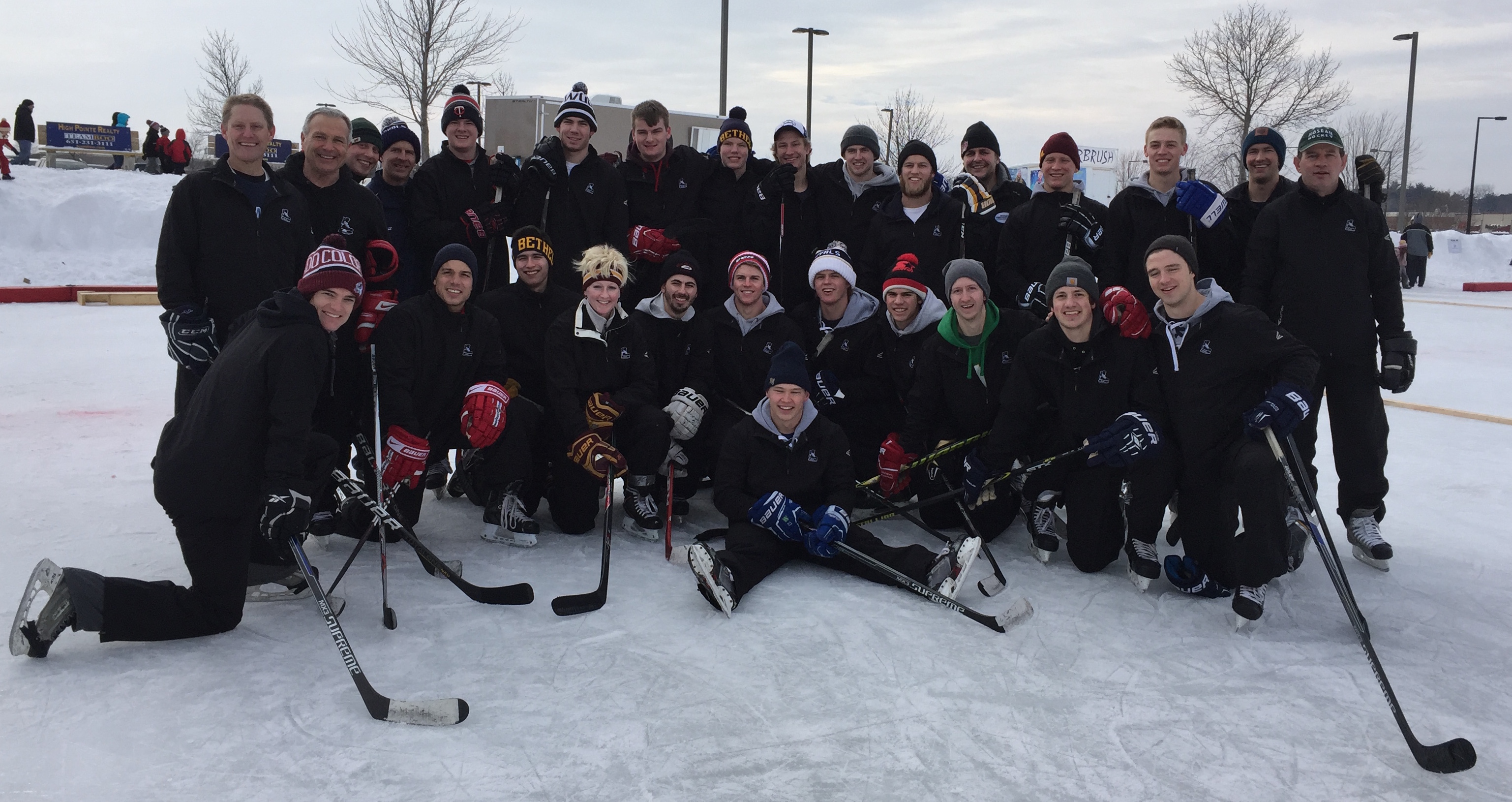 The Bethel Men’s Club Hockey team dropped the first game to Hamline’s Club team. The Royals needed to win and outscore the Pipers by at least three goals the next day to take the Cone home.

The Cone is the prize for the winner of the annual, two-game aggregate series Bethel and Hamline compete in. As a way to develop more of a rivalry between the two teams, one Hamline player showed up to a game a few years back with a street cone he painted silver with a HU logo on one side and gold with BU logo on the other.

Since then, the series on Snelling has been one that’s looked forward to all season because every player wants to take home the Cone.

The three-goal deficit after game one seemed like a daunting hill to climb for the Royals, but there was no time to let the disappointment ferment.

There was work to be done in the morning.

The following day, Feb. 6, was Hockey Day Minnesota, a statewide celebration of a game rooted in the state’s sporting history. As a part of the festivities, the city of Stillwater, beginning this year, hosts an annual clinic consisting of over 700 youth hockey players called Sticks in Stillwater.

When it came time to find instructors for the event, former Bethel men’s hockey head coach and HMI’s Minnesota Area Representative, Bill Butters, reached out to freshman forward on the club team, Ike Larson. Having done previous work with HMI, Butters asked Larson to see if he and other players would be intrigued.

“Bill [Butters], myself and my family have been a part of HMI for years,” Larson said, “So he wanted to know if myself and any guys on the team would be interested.” Larson and fellow freshman forward, Noah Bragg, ran it by the team next day at practice and the response was overwhelming.

“Just about everyone raised their hands,” Bragg said.

A majority of players on the club team spent that Saturday running clinics, preaching the word of God and soaking in the experience as a mentor. They even received a little flattery form some of the younglings.

“A lot of them would ask us if we played for the Gophers or Wild,” Bragg said. “It was tempting to just say yes.”

After the festivities in Stillwater concluded, the team hiked back over to St. Paul. They still had a game to play that night.

With the Cone on the line, the Royals used a strong second period, where they scored six goals, to beat the Pipers, 7-2, and win the series aggregate, 9-7. The Cone was theirs.

Bragg and Larson weren’t sure if being able to participate in Sticks in Stillwater gave the team any motivation to pull out the win and scoring surge, but no matter the outcome of what happened on the rink, many were impressed by the simple fact the team took time out of their day to preach and practice the values they live by.

“To see these guys go out there and do this kind of stuff is totally cool,” Steve Whiting, associate professor of business and club head coach, said. “It makes it worthwhile (to be a part of this group and to help guide them).”

0 comments on “A Club That Coaches”