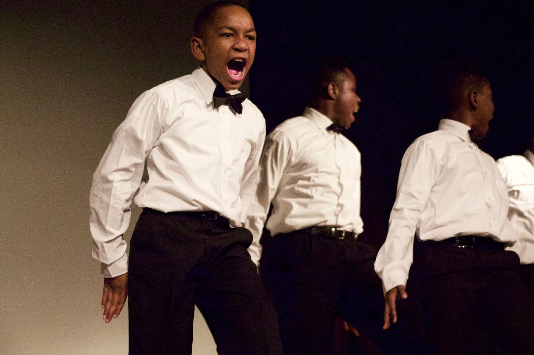 The United Cultures of Bethel hosted a Black History Month Coffeehouse Friday, Feb. 26 in the Underground. The doors opened at 8 p.m. and the Underground soon filled with eager students and faculty. The turnout was unexpected, as the total was higher than any other UCB event this academic year.

Junior Anthony Mutua was one of the hosts for the evening and described the event as “a positive educational platform to honor and celebrate a diverse people.”

With education in mind, the night kicked off with a lesson on color. A segregation activity placed students at tables based on how their skin mirrored the brown paper bag. In the 1900s, upper class black communities and sororities used the bag as a barometer between white and black hues, determining if a black person gained admittance or acceptance. The activity’s purpose was to highlight the importance of inclusion and show how far society has come in regards to color.

“[We did this] to show what a miracle it is that we are all in this space together,” junior Victoria Featherstone said. Featherstone was another one of the hosts for the evening.

Wayman Boys Steppers for Christ perform at the Black History Month Event, Feb. 26 in the Underground. This group was created to provide African-American males between the ages of 5 and 18 with an opportunity to excel through the stages of life.“Please do not post any videos of what you saw, we are in competition season and we do not want other teams stealing our moves,” founder Sean Burns cautioned.

“A big issue that came up was how to talk about the stereotypes that come with being black or the differences of black culture, without sounding like we are attacking those who watched,” Song’ony said.

Along with educational activities, there were performances reflecting black heritage. Featherstone and Senior Jolene Rotich led worship, giving those in attendance an opportunity to move out of their comfort zones.

Junior Will Kah performed his single, “Black Sheep” as a preview for his album to release on March 31. Also performing were the Wayman Boys Steppers for Christ, a group out of Minneapolis. The group was created to provide young African-American males between the ages of 5 and 18 an opportunity to develop integrity and excel in their journey through the stages of life. Their performance received a standing ovation.

“I really enjoyed the event, from the planned things they had for us to do, all the way down to the food,” freshman Haley Johnson said. “I got to try things I hadn’t had the opportunity to try before this event.”

With the response from the event being positive, do students of color believe Bethel is receptive to more frequent cultural events outside of Black History Month?

Though there was a general consensus from students who attended the event that Bethel is doing better with cultural events, Junior commuter Bo Adedeji thought these events could benefit from more advertisement.

“There were more Bethel students at this event, which was great, but advertisement could have been better. More posters would have been nice, because I only knew about the event by word of mouth,” Adedeji said.

“The night cannot speak for all of Bethel, but it does speak for the people who were at the event,” Kah said. “We can’t get the narrative twisted and label all of Bethel as being ready for cultural events, when less than 5 percent of the school population was at the Black History Month event, but nonetheless, a lot of people came.”

Though February is over, UCB will be hosting more events highlighting cultural understanding and diversity.

0 comments on “Unity in the Underground”