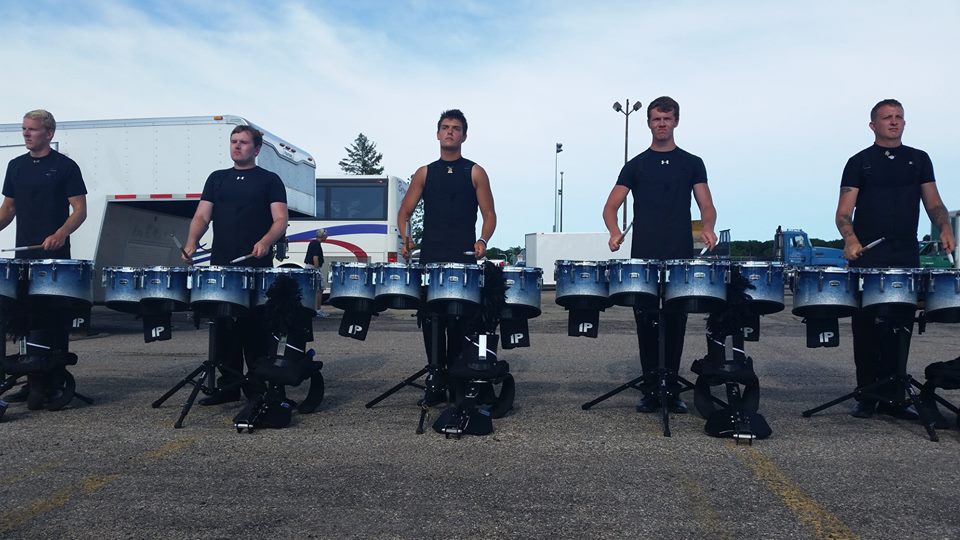 Before college, James Schuster traveled the country as an elite drummer.

Growing up, James Schuster became acquainted with music through the piano in the comfort of his Rochester home. At age 11, he took up the guitar. By middle school, his interest in percussion sparked a desire to participate in marching band. While fellow classmates threw footballs and frisbees outside, Schuster diligently drummed for hours indoors, working for his eventual admittance into Drum Corps International: the professional and competitive marching organization.

In the summer of 2011, Schuster and roughly 150 other musicians between the ages 16 and 22 toured from coast to coast, playing what ESPN once called “marching music at its very best.” Drum Corps performances occur anywhere from Lucas Oil Stadium, home of the Indianapolis Colts, to the Alamodome in San Antonio, Texas.

Achieving this dream of marching in front of several thousand spectators across the nation requires a perfect harmony of musical talent, discipline and physical strength. Auditions are competitive, with hundreds of students competing for a handful of spots. The positions are given to premier musicians from all around the world. For Schuster, this meant applying his hours of practice into an intricate routine that included marching a 50 pound quad drum around for 12 minutes straight. He thought of himself as “musical athlete.”

Once accepted, the first month of the program is dedicated to what Schuster calls bootcamp; a time that entails mile runs, push ups and stretches. This season is crucial to ensure that corps members can survive the grueling 12 hour practice days, weighed down with heavy equipment and the equally heavy rays of a relentless sun.

After enduring the physical tests, Schuster’s group, the Colts, hopped onto a coach bus and left their base of Dubuque, Iowa with semi trucks filled with instruments and food following closely behind.

For Schuster, one of the more difficult parts of the program was remaining positive when the alarm clock goes off at 8 a.m. every morning. The drummers’ days passed in rhythms of four hour shifts and practices that lasted until 10 p.m. every night. On show days, the group performed their routine for stadium venues in lieu of night practice. With post-show adrenaline rushing through their veins, the sweaty drummers piled back onto the bus to travel to the next destination. As the bus tugged along to the next venue – sometimes a few hours, other times a few states – they tried to sleep the best they could before the bus lurched to a stop, forcing the drummers to set up camp in a high school gym. Once settled, they did their best to squeeze in a few more hours of sleep before 8 a.m. rolled around and started the cycle again.

One of Schuster’s finest accomplishments while competing in Drum Corps was winning a mini competition within the winter season of the program. During the Indoor Drumline World Championships in 2014, Schuster competed on an electric drum to see who was the fastest drummer that day. Schuster won, hitting the drum 962 times in 30 seconds.

Despite the highly competitive and disciplined nature of Drum Corps, Schuster made some of his best friends during his four years in the program.

“It’s a difficult thing to understand because you show up at auditions and you have no idea who these people are,” Schuster said. “You face everything you can imagine: jokes, being super mad at each other all the time, being angry at one person, being angry at two people… [you] kind of form this brotherhood.”

Schuster grew close with a Drum Corps member from his home town named Kayla. The two played in music ensembles together. Halfway through Schuster’s second to last year in Drum Corps, Kayla was murdered by a student from her former high school. The tragedy struck the entire program, and eventually resulted in recruiting a replacement: Bethel Junior Christine Ramstad.

For Schuster, his last performance in Rochester, New York is his most significant memory.

“It was really sad when I got done. [It’s] an emotional time,” he said. “I’ve spent hours drumming in my bedroom by myself, trying to get to this point and here I am and it’s all done.”

By that time, Schuster was the section leader, guiding the four other quad drummers on the field for the Minnesota Brass. Normally during a performance, he claims to think only of perfecting each coming step. But in his final show, he allowed himself to go on “autopilot” and appreciate the moment.

Now, with his Drum Corps years behind him, Schuster is focused on completing his business major. He’s also kept himself occupied by teaching drumline at Eden Prairie High School until last Fall.

Although the skills he developed as a drummer are no longer needed, the discipline and perseverance he developed are here to stay.

“I’ve gone through some of the hardest things I think I’ve ever done,” he said. “And so I know that moving forward I’ll be able to chase my dreams in that way.”

0 comments on “The Marching Major Leagues”