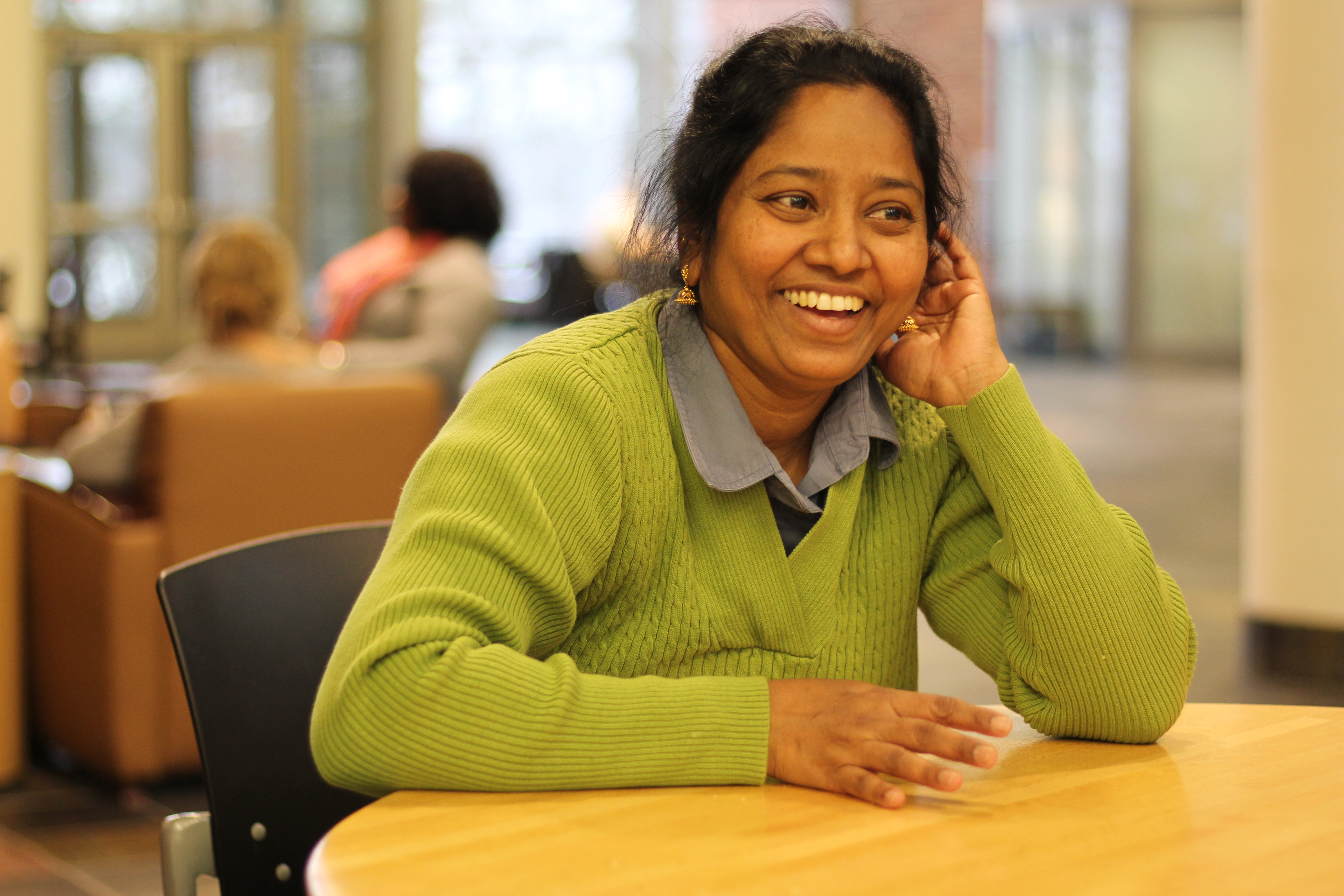 In India and at Bethel, Sodexo worker Geetha Peters loves to serve.

Every day hundreds of Bethel students eat in the Dining Center and at the Royal Grounds. Every day they are greeted by a smiling face. Geetha Peters loves manning the register and greeting students. The students, as well as Peters, love what she does.

“I love Geetha!” Kim Enmark exclaimed, a freshman who encounters Peters when she buys her daily cup of joe. “I know she must have hard days working here but I’ve never seen her [any way] other than radiantly joyful.”

Peters started at Bethel University as a cashier two years ago when her positivity caught the attention of Bob Schuchardt, Peters’ supervisor at Sodexo.

“She’s got a sweet personality,” said Schuchardt. “She’s always smiling and is always so warm and friendly.”

But Peters, like all Sodexo employees, has a life that extends beyond Bethel. Before Peters worked at Bethel, she lived in India and ran a faith-based school for impoverished young girls.

Peters and her first husband, Robison Peters, started the Karunya Girls School in 1993 in Tirukoilur inside Siloam, a small village on the southern side of India. Education and protection for girls is low in Siloam, where even riding the bus is dangerous because of the amount of harassment and violence that occurs.

Many girls in rural areas like Siloam drop out of school prematurely, due to violence and family obligations such as marriages arranged by their parents. And, though violence in India is decreasing, education for girls still remains a problem. While 75 percent of males fifteen and older are literate, just 51 percent of Indian females can read and write.

“When the school first started, it was me and my first husband who ran it,” said Peters. “There were about a hundred girls at the school and all of them came from very poor families. We took them in and provided a home for them and an education.”

At this school, the girls from various religious backgrounds had the opportunity to read The Bible, sing Christian songs and pray everyday. Peters was the one who took care of the girls while her husband did all of the financing. Slowly, they began to hire more teachers and recruit cooks to make homemade meals for the girls. All was well until Peters’ husband died in 2000. Following his death, the German sponsorship program had no choice but to stop funding the school and the Karunya Girls School had to close.

After Peters lost her husband and the school, she remarried and moved to America where she had a difficult time adjusting. She didn’t have a driver’s license and knew very little English, so she would spend a lot of time in her house, homesick for the country she left behind.

“It was a very difficult time for me,” Peters reflected. She was still in culture shock when the first snow fell. “My husband went out right after the cold weather came and bought sweaters and mittens,” Peters laughed. “India was always so hot and the snow was so cold!”

After a few lonely months of being in an unfamiliar culture, Peters started to go to church, landed a job at a nursing home and began doing volunteer work. Through these activities, she slowly began to learn English and adjust to her life here. Peters’ husband found a job at Bethel University as the Associate Dean of Off Campus Study Abroad Programs not long after they moved to America.

When Peters came to Bethel through volunteer work, she was impressed how nice the students were and how kind the faculty was. Two years ago, Peters applied for a cashier position for Sodexo at Bethel and got the job.

Even though it has been thirteen years since Peters moved from India to the U.S., she still hasn’t fully immersed herself in the American lifestyle. “I’m not totally changed to this culture,” she said, adding that she loves to wear her colorful Sari, a traditional dress Indian women wear to show gracefulness and the richness of their culture.

And while Peters adjusted to American culture, the Karunya Girls School still plagued her mind. She tried to get the funds to restart the school so the building wouldn’t be empty for long but didn’t know where to start. Peters had to put the project on hold so she could focus on her life in America, but never forgot about the girls who attended school there.