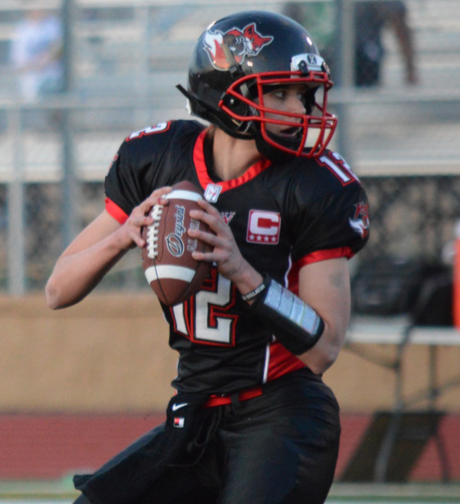 Kiersten Hansen was in her typical nighttime routine, scrolling through Facebook before bed when she came across a post a friend liked in early September of 2015.

“Register online now to tryout for the Minnesota Vixen Women’s Football team,” she read. “See if you have what it takes to join the longest continuously operating women’s tackle football team in the nation!”

Below the post was a link to register. As Hansen typed in her information, the thought of her fulfilling her childhood dream becoming closer to reality than she had ever hoped consumed her. She didn’t hesitate to click send.

It was official. In 15 days, Kiersten Hansen had a tryout for the Minnesota Vixen of the Independent Women’s Football League (IWFL), widely considered the highest level of competition for women’s football in the world.

Ever since Hansen remembers, football had been an integral aspect of her life. It all started with her father, Thor, rushing the family back to their home in Eden Prairie, Minn. after church on Sundays, so they could get back in time to see the Minnesota Vikings’ kickoff. Her mother Carmen would make enough dip to last them the whole game. For the next three or so hours, football was all that mattered at the Hansens’.

Hansen grew up in a clan of Viking supporters. On both of her parents’ sides are fervent families of purple and gold fans. The passion wasn’t just football, either. Sports, in general, were a main source of entertainment for the family. In fact, very few Hansens have even played football. Basketball, soccer and wrestling make up most of the Hansens’ athletic history, not football.

Kiersten Hansen was different, though. She not only revered watching the games, like her father and mother before her, but she loved playing the game, too. During recesses in elementary school, Hansen would play football with the boys. She spent more time with them than the girls her age.

In the fourth grade, her teacher passed out signup sheets for extracurricular activities after school. The boys were handed blue sheets. The girls were handed pink sheets. The blue sheets were for football. The pink sheets were for dance lessons. Hansen threw her pink sheet in the trash upon receiving it. She was upset because she would rather play football, but, because she was a girl, wouldn’t be allowed to. Her fellow boy classmates were appalled, too. Hansen was one of the better players in their class, there was no way they were going to let her take dance lessons. She was too good. It would be weird to play football without her. She was part of the gang, so they took action.

In class later that day, a couple of boys snuck up to their teacher’s desk when she left the room, and stole a blue sheet for Hansen. She took it home, convinced her parents to sign it and brought it back to her teacher the next morning. Her teacher approved the decision and Hansen got to play football with her friends.

She played football until her sophomore year of high school. After playing high school football her freshman year, Hansen decided it was time to hang up her cleats. With the boys getting bigger and other athletic opportunities in basketball, soccer and track knocking on her door, she figured it was time to stop living her dream and face reality.

After high school, Hansen enrolled at Bethel University, where several of her family members were alumni. She played three years of basketball and one year of soccer. She majored in pre-occupational therapy, a major Hansen built herself, and proceeded to earn her Master’s degree in occupational therapy from the University of Minnesota. She has worked at the Medical Center on the university’s campus since 2012 as an occupational therapist.

Hansen kept herself busy in the four years since. She played basketball, golf, softball and tennis regularly. She picked up football again. Every winter after finishing grad school, she played in the women’s football league at local YWCAs. Her passion for football was still burning.

That passion burned a thousand times hotter when Hansen saw the post on Facebook about the Vixen tryouts. She figured she would give it a shot, one last chance at playing competitive tackle football.

On September 26, Hansen ran onto the fields at Northwestern Health Sciences University in Bloomington, Minn. with 130 other women. They were put through several different drills, all designed to test the skills of each player. Hansen got through whatever was thrown her way, and she left the tryout feeling satisfied. She found closure being able to say she officially attempted to play professional football and thought nothing more of it. She didn’t think there was any way she would make the team.

Two weeks later, she got a call from Vixen head coach Brandon Pelinka. He wanted her on the team as a quarterback after being impressed by how Hansen performed in throwing drills.

She couldn’t believe that they actually wanted her to play, but didn’t give Pelinka an answer right away. She wanted time to think about it. She worried about her job and the commitment of time football would add to her life. She was worried about what others might think of her. She kept her tryout on the down low. She only told two people about it, her roommate and her mother.

After consulting both of them and few others, she discovered that people wanted her to pursue this. She called Pelinka back a few days later.

Her answer was yes.

Hansen began doing an offseason lifting regiment with her new teammates in October. In January, practices started. Before she knew it, it was April 9. The first game of the Vixen’s regular season against the Rocky Mountain Thunder Katz had arrived. The first professional football game for Hansen had arrived. Her dream was truly a reality.

Hansen was nervous. The game was also her first start of her career. Even though she had no previous game experience in the IWFL, the coaching staff was comfortable starting her. The team’s other quarterback was sidelined with a leg injury.

By the time Hansen stepped out on the field and ran a couple of plays, the nerves melted away. She remembered she was just playing football. She just wanted to have fun. The Vixen ended up defeating the Thunder Katz, 14-7.

After four games of the 2016 season, the Vixen are 4-0. She ranks at the top of many passing categories, including top-five in passer rating, completion percentage and touchdowns. She loves the opportunity the team and league have provided for her. She’s not sure how long she will play football, but assures that, considering how things are going for her so far, it may be quite a while before she takes her pads off for the last time. She plans to take it year-by-year and make a decision, as long as she can make time for it.

For now, Hansen deals with the lifestyle changes that come with being an athlete. The travel, practice and games are all becoming a part of the norm, and she’s picked up a few hobbies along the way. One is icing sore muscles and joints as a part of her nighttime routine. It may get in the way of scrolling through Facebook, but so is the life of a football player.