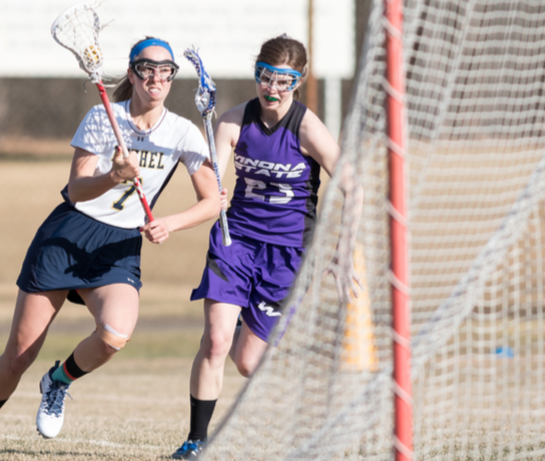 Mathias Durie | For the Clarion

An alarm wakes the Bethel women’s club lacrosse team at 6 a.m. on a Monday morning. The sun isn’t up yet, but that doesn’t stop the team from getting to the SRC to practice for the biggest stretch of their season: Nationals.

For the first time in 12 years, the team competed in the National Championships in Winston-Salem, N.C. They played four games last weekend on the east coast, finishing 2-2.

There are two divisions of women’s club lacrosse. Bethel is in Division II and is one of only 12 teams nationwide invited to the national championship.

There are two ways to make the national championships. Each team must either win a regional tournament or be invited with an at-large bid. In 2014, the team won the regional tournament but because of errors in filling out and sending in their paperwork, they were unable to compete. In 2015, they beat St. Thomas in the playoffs, but the Tommies wound up with the bid.

“Going to nationals makes every 6 a.m. practice, every sleepy lap around the SRC, every long bus ride to away games completely worth it,” senior Rachel Olson said. “Getting that bid gave us new life and something to prove.”

After multiple years of heartbreak, 2016 is their year. The team lost to St. Thomas in the playoffs but was selected with an at-large bid.  It’s satisfying feeling for the juniors and seniors who came so close to nationals two years in a row.

“It was honestly the most rewarding experience to finish this strong senior year,” senior Maddie Johnson said. “No-one knew where bethel was, we got asked all the time. We made a statement that we could play with anyone.”

Their season schedule looks similar to that of the volleyball or basketball team, playing teams like St. Thomas, Gustavus and St. Benedict’s, but lacrosse is not a MIAC sport so they hold the status of a club team. The team went door to door in the freshmen dorms to raise money. They also created an account on Gofundme.com to fundraise for the trip.

Because they have to raise their own funds and tournament attendance requires students to miss class near the end of the semester, a handful of team members elected to skip the trip.

Earning a bid to nationals hasn’t been the only highlight for the Royals this season. They were awarded four All-American nominations (Emily Engelhart, Andrea Johnson, Maddie Johnson and Rachel Muñoz). Goalie Allie Fischer earned the region’s best goalie award. Head coaches Amanda Fyle and Diana Suedbeck earned coach of the year honors in Lakes and Plains region and were runners up for the WCLA Coach Of the Year award. Both work as volunteers and are not compensated for the time they commit to the team.

“We love them and they love us back. It’s a super awesome mentoring relationship,” Olson said. “They can coach us but at the same time be our best friend. Everyone looks up to them which is sweet.”

St. Thomas and University of Minnesota also represented Minnesota in the National tournament.