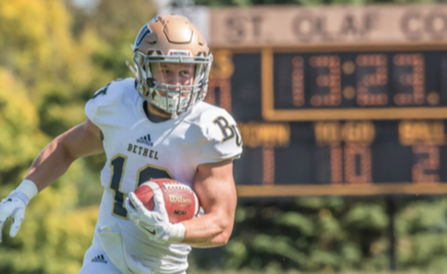 Another year has come and gone for Bethel athletics. Spring sports are drawing to a close, hinting at the start of the summer. As is usually the case, this year provided plenty of highlights across a number of sports. It wasn’t just players reaching new heights, as coaches caught the spotlight as well.

This year also brought many firsts for a number of teams:

For the first time in its program’s history, the volleyball team made it to the Elite Eight of the NCAA Division III National Championships. The team posted a record of 25-10, the first season of 25 wins for BU volleyball in 25 years. The Royals never lost back-to-back matches, finishing with a 9-2 MIAC record and a 25-10 record overall, They shut out opponents in 16 of their 25 wins.

Is the Best Yet to Come?

The volleyball team finished No. 11 in AVCA polls, the highest in the history of the program. Second highest was 15 years ago in 2001 when the squad sat at the No. 13 spot. The Royals bring back Carlee Hoppe, Katie Lubben and Kristin Stern, all of whom received MIAC awards in seasons’ past.

The women’s hockey team captured its first-ever MIAC regular-season championship in a 5-0 sweep over Concordia. Crowned as the top MIAC team, the squad punched its ticket into the MIAC playoffs, defeating Augsburg in an overtime thriller to advance to its second consecutive MIAC playoff championship. The Royals fell to St. Thomas 2-1 in the finale. The Royals finished with 26 total points, a 12-4 conference record and the MIAC Coach-of-the Year Award was given to head coach, Brian Carlson.

The women’s tennis team finished 2015 with the best record in program history (19-5). While this is the second time the squad has earned a playoff berth, this is the first time they have won 19 matches in a season. With a 7-2 win over Saint Ben’s on April 26, the squad punched their ticket to the MIAC playoffs. During their trip to Florida trip for spring break, the Royals topped all six of their opponents, earning shutouts in three matches.

Bethel athletics received a long-awaited upgrade to their spaces just in time for the first kickoff in the fall. The men’s football and basketball team opened their 2015 seasons with brand new locker rooms and murals. The Wellness Center opened its doors to on October 12. Most recently, women’s sports also got their own mural adorning the outside of their locker room.

As Bethel experienced its share of program firsts, many players experienced their lasts. Their last time playing in their arena, gym, park or stadium. The last time they wear “Royals” across their chests. the Clarion bids farewell to the senior athletes:

In his final year, Klitzke ran for a total of 1,086 yards on 187 carries, the highest single-season number in his collegiate career. He amassed over 3000 total rushing yards over four years, putting him in the top-five among Bethel’s all-time rushing leaders. He rushed for 684 yards during his sophomore season as the Royals captured a MIAC regular season championship and a bid in the NCAA Division III football playoffs. Klitzke was also one of eight football players who received All-MIAC honors this year.

Kivisto led the women’s hockey team to its second consecutive MIAC playoff championship game and its first regular season championship this season. Right from the rink, Kivisto went to the diamond as the BU softball team’s catcher. Coming to the end of her senior softball season, Kivisto has tallied 129 career RBI. She also finished fourth in the MIAC in home runs (7) and is the Royal all-time leader with 30. Last week, she was voted as a CoSIDA Academic All-District performer.

Kali Johnson lead the team in digs this season with 594, tallying 44 in their season finale versus Hendrix College. A four-year contributor, Johnson has done a little bit of everything for the Royals. She spent two seasons playing libero and two as an outside hitter. She was voted team MVP at the end of her junior and senior seasons and was one of four seniors that helped the Royals to a 76-48 record with three total MIAC playoff appearances and an unforgettable Elite Eight run in the NCAA tournament in 2015.

Heitmann finished his season second in the MIAC in strikeouts with 57. Last year, Heitmann helped the Royals to their first-ever MIAC regular season championship, as he finished the season first in the league in wins with nine and strikeouts with 68. He was third in innings-pitched with 65 and fourth in ERA at 3.05. Heitmann also spent the summer of 2015 pitching for, the Willmar Stingers of the Northwoods League.

Parupsky earned her fourth consecutive MIAC All-Conference and MIAC All-Defensive Team, awards this year, becoming the first in league history to receive those honors all four seasons of her collegiate career. She was also a two-time D3hoops.com All-region honoree. Parupsky averaged 9.8 points 5.7 rebounds and 2.1 blocks per game in her senior season.

0 comments on “A Year of Firsts and Lasts”