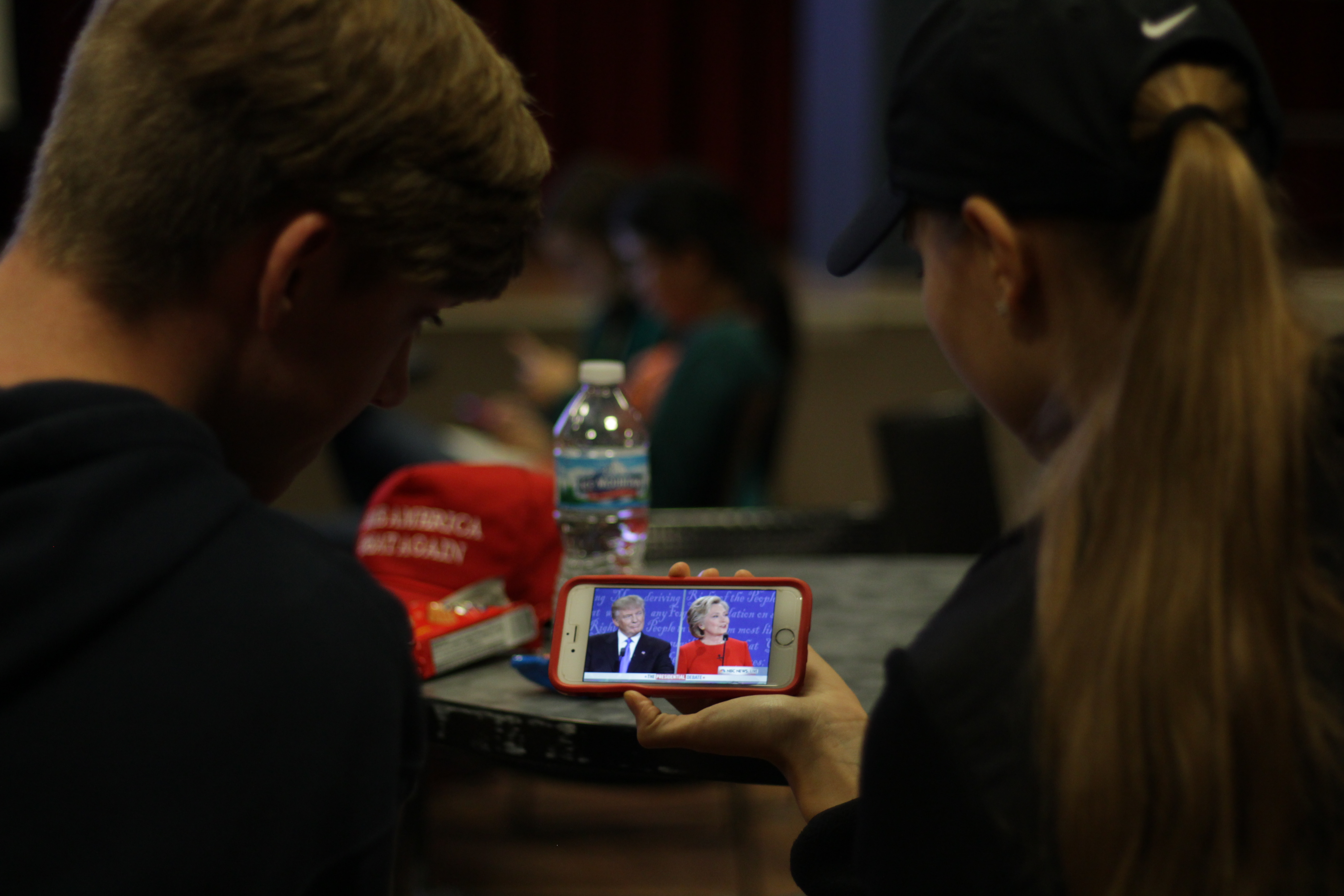 Students gathered in the underground the night of Sept. 26 to watch the live-stream of the first presidential debate – and many are still unsure of who to vote for.

“I am coming because I haven’t really kept up with the news lately but I think this is super important,” said senior history major Emily Ruud. “Since I am student-teaching this semester, I am going to get questions from high school juniors and seniors about government and how the election process works.  I need to be prepared to answer their questions and do it informatively.”

The debate before the debate among the students gathered in the underground was if Donald Trump would come off as a bully in this debate or if he was going to step up and tone down provocative comments. It was clear within minutes of the opening question that Trump was going to play the bully.

One of the main issues that voters were concerned with was the issue of Americans living from paycheck to paycheck and wondering which candidate will create jobs that will put more money in the pockets of the people. Hillary Clinton addressed this statement in her similar style of cramming as much information as possible in a two minute answer. She covered everything from raising the minimum wage and transforming the economy to a system that benefits everyone to equal pay for women. When Trump was given his two minutes, he explained the way to create jobs in the U.S. is to not let the jobs leave.

“We have to stop our jobs from being stolen from us,” says Trump, referring to countries like China and Mexico that have been manufacturing American goods. “I can bring back jobs. You can’t.”

The most heated topic of the night, however, were questions raised about race. Clinton accused Trump of building his campaign on a “racist lie” that President Obama is not an American citizen. Trump retorts this by saying that he now believes that Obama was born in Hawaii despite years of him claiming otherwise but does not address why the sudden change. She goes on to say that Trump has a history of “engaging in racist behavior” due to Trump’s company being sued in 1970 for housing discrimination. When asked how they would solve police shootings and racial unrest, Trump proposed that we reestablish law and order in our society which would fall heavily on the hispanic and African American communities. When asked if police are implicitly biased towards African Americans, Clinton responded, “I think that implicit bias is a problem for all of us, not just police.” She wants to restore trust between communities and the police.

Later on in the debate on race, Trump attacks Clinton saying that she has been fighting ISIS her entire life and will never be able to defeat the terrorist group. “You’re telling the enemy everything you want to do,” Trump said. “No wonder you’ve been fighting ISIS your entire adult life.” Clinton fires back saying that she at least has a plan to fight ISIS and after that statement, Clinton jokes, “I have a feeling that by the end of this evening that I am going to be blamed for everything” to which Trump responds, “why not?”  Trump later describes his opponent by saying that she is a “typical politician — all talk and no action.”

A poll given to students who attended the live-screening  of the presidential debate in the Underground showed that many students are still unsure of who they want to vote for. For some, voting seems like a catch-22 because each candidate has his or her own faults but 98 percent of polled students said they plan on voting for a candidate because “not voting is worse than voting.”Sophomore nursing major, Caroline Wittenberg, who plans on casting her vote Nov. 8, is disappointed in the candidates.

“They acted like children during the debate,” she said. “Hopefully one of them can get their act together before they are elected president.” Wittenberg plans on watching every debate leading up to the election in order to be informed.

0 comments on “Candidates face off in the first presidential debate”