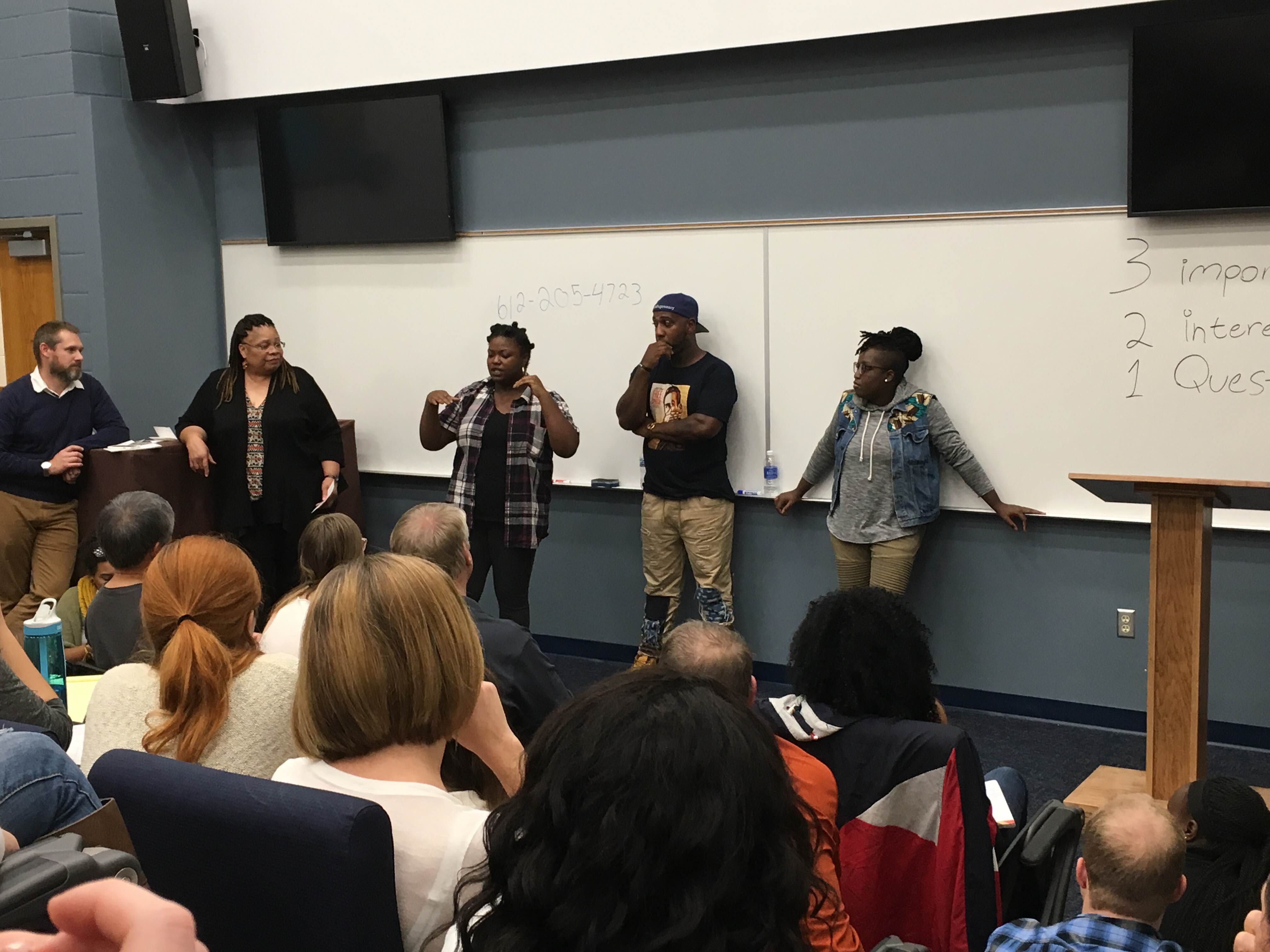 Chants and clapping resounded from the largest classroom at Bethel University at the end of a Black Lives Matter (BLM) meeting Oct. 3.
“We have nothing to lose but our chains!”
After the graffiti spray-painted on the rock in Kresge courtyard Sept. 28, every seat was filled and several spilled over onto the stairs and floor. The audience included Bethel students but also parents, professors, University of Minnesota students and Bethel alumni.
“I came partly because I want to learn more,” senior Sarah Hatch said. “If something affects one student here, it affects all of us as a community and we need to listen.”
Pastor Danny Givens, a member of Black Lives Matter Minneapolis and a 2011 Bethel alumnus, led the meeting. He spoke of the importance of supporting the movement from a Christian perspective and what white people can do to support BLM.
“God loves black people because we are made in the image of God. You need to see before you can understand. I want to be out where the people are, like Jesus was,” Givens said. “This city would be on fire (without BLM). Literally.”
The crowd reacted emotionally when Givens said he personally knew Philando Castile, an African-American fatally shot by a police officer in Falcon Heights, Minn., in July.
“Philando was my little brother’s best friend. I saw him the day before he was shot. I knew his mother, and he said he supported the BLM movement. You killed someone I loved,” he said.
The meeting encouraged discussion and included a question-and-answer session led by Givens and two members of BLM Minneapolis.
Several questions were asked that evoked strong emotional responses, such as students walking out of the meeting and members of the panel leaning on the wall and each other for physical support.
When a question was asked about why BLM Minneapolis shut down I-35W in July, one member of the panel, Asha Long, said, “Why the hell should you go home to your 600-count sheets when I don’t even know if my babies are going to make it home safely? It’s a problem when a broken tail light means I could die.”
Givens spoke of the change he hopes to see at Bethel including black students feeling safe and heard.

“This didn’t change my perspective necessarily, but I liked how this was a chance to talk about this issue in person more than just over social media,” alumna Mikah Holloway said. “This was more of a refresher and a way to see other’s perspectives.”