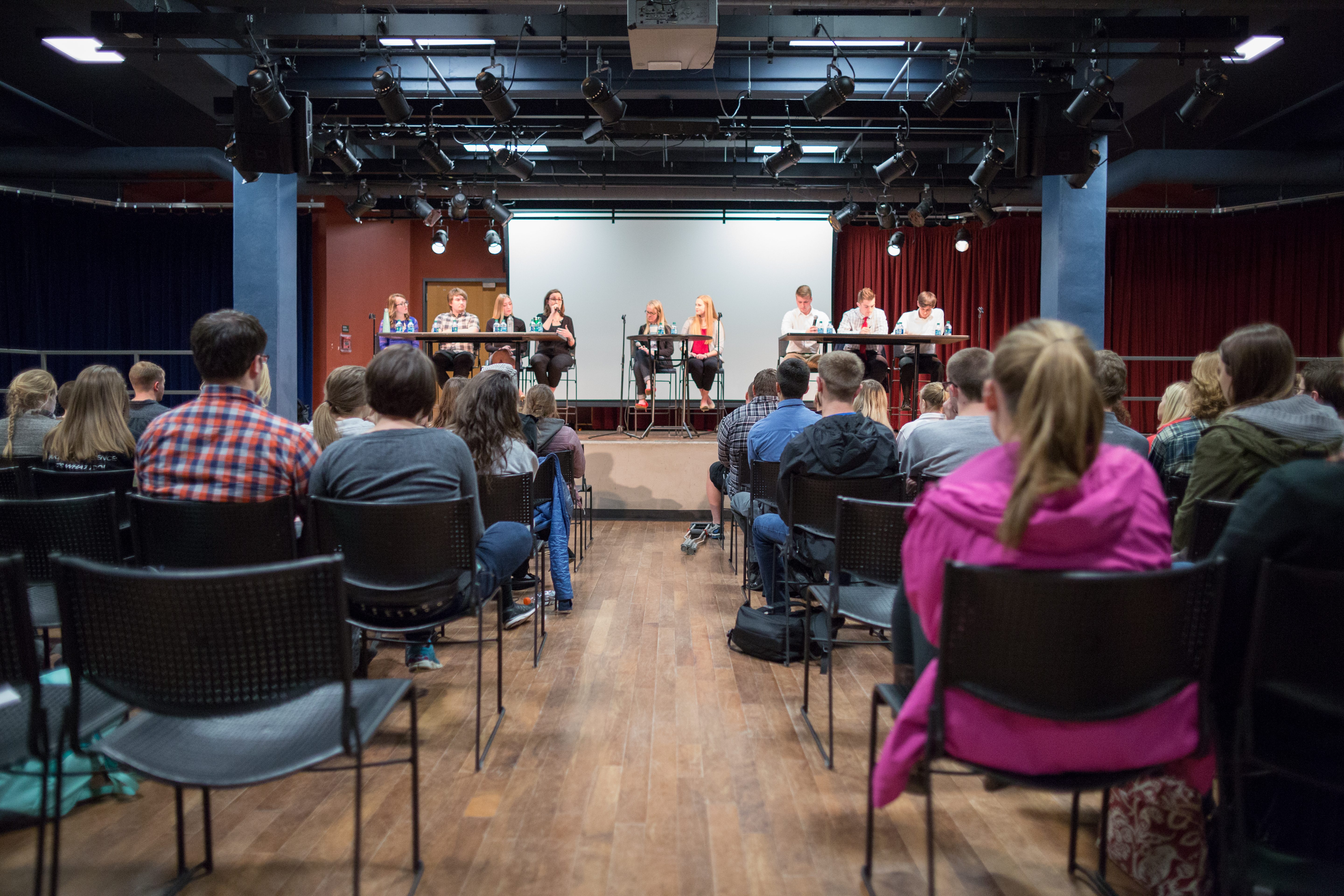 College Democrats and College Republicans square off in an election debate Oct. 26.

The election debate, moderated by Student Body President Zoe Vermeer and Pi Sigma Alpha President Caitlin Navratil, was in the works since September. It came to life the night of Oct. 26. Within 10 minutes, the black plastic seats were filled in the lower level of the Underground. Students sat with their laptops open at tables on the second level. Before the debate began, moderators showed a video on civility, posted Oct. 17 on the Bethel Student Government Facebook page.

“The purpose of this evening is simply to inform and educate,” Vermeer said.

Moderators clarified that each side would be allowed two minutes to respond to each question and one minute for rebuttal if they chose. Audience members were allowed to submit questions during the debate for consideration.

College Republicans Senior Vice President John Ratliff answered the first question on major policy issues, saying that the national debt is left out of presidential debates and largely waved off by both candidates.

Representatives from both groups struggled to stay within time constraints as questions became more complex. Vermeer asked both groups how to fix distrust of police and public safety.

Moderators also asked both groups to respond to the refugee crisis, foreign policy, pay inequity and climate change. Both groups also shared their view on Christianity in American policy.

Krueger offered a differing view. “I think it’s really important to realize 55 years of experience doesn’t mean it’s okay to be corrupt,” he said. “You’d be hard-pressed to find a worse candidate for the first woman candidate of a major party.”

Representatives from both groups reacted positively to the debate after it was finished. Arend was pleasantly surprised by how many things both groups agreed on and College Republicans Executive Director Michael Cameron said that each group simply had different solutions to the same problems.

“This was not about candidates, it was about the issues,” Olson said.

Freshman Ify Nwankwo wished there had been more “genuineness” among the two groups. “(I wanted to see someone) actually get worked up over something they actually believe,” she said.

“You have to vote your conscience,” Cameron said on stage. “A truly wasted vote is a vote for a candidate you don’t believe in.

How College Democrats and College Republicans line up on issues

R: Crime is the problem and education is the answer. Education reform in schools will help.

D: Education is helpful, but the real problem is implicit bias by police officers. Advocates for education for the police force.

R: Not affordable. Should be repealed and replaced. “It can be crippling to families who once could afford to have insurance and now just can’t.” – Sam Krueger, President

D: Affordable Care Act should not be repealed.

R: It’s illegal for companies to pay women less based on gender. Any inequity is a cultural problem, not a legislative one.

D: Barriers to women exist in the workplace. Government should increase options for maternity leave.

R: If public higher education is tuition-free, the value of a degree goes down. Push for skill and trade schools instead. Does not believe it’s the government’s responsiblity to eliminate student debt. “Higher education is a privilege and it’s not a right.” – Sam Krueger, President

R: Mostly against abortion except in cases of rape or incest.

D: Pretty much pro-choice. Believes there are less abortions under progressive leadership.

R: Clinton is corrupt and not fit for the presidency. Republican party was once a third party.

D: Clinton is experienced and ready for office. Voting for a third party candidate is a wasted vote because one of the candidates from the major parties will win.

R: Neither increase or decrease the number of 10,000 refugees taken in. The government’s primary goal is to protect citizen’s rights.

D: Increase number of refugees taken in. The United Nations’ priority is to human rights, not just citizen rights. “This has become a human rights issue.” – Berit Turnquist, Vice President

R:  Stick to Christian values, but the Founding Fathers might not agree. “We should not discriminate against people that have different ideals than us as long as they don’t harm one another.” – Sam Krueger, President

D:  The US is growing more and more diverse and should make space for that, including those who don’t identify with any religion at all. “The US should make room for the common ground that we share as US citizens instead of focusing in or turning a biased eye to Christian values specifically.” – Berit Turnquist, Vice President

Topic: US war in Aleppo, Syria

R: Support fight against ISIS without putting more American lives at stake. Refugees should be absorbed into surrounding countries.

D: America is justified in backing the rebel regime since Assad committed war crimes against Syrian people. “We need to approach this from a humanitarian standpoint.” – Daniel Gray, President

0 comments on “Bethel hosts election debate in the Underground”