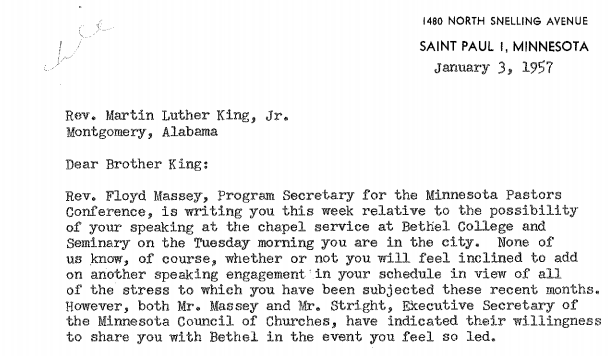 A historical review of Bethel’s involvement in the Civil Rights Movement.

In the aftermath of the rock incident, questions, dialogue and confusion stirred Bethel’s community to a wide variety of actions – personal conversations, forums, demonstrations and prayer. Race and reconciliation became two words often spoken in the same breath. Yet, these buzzwords are not new to Bethel University.

Almost 60 years ago, the United States experienced social unrest driven by advocacy for African American civil rights. The social transformation of the Civil Rights Movement triggered monumental judicial and legislative changes: Brown vs. Board of Education, the Civil Rights Act of 1964, and the 24th and 26th Amendment to name a few.

Bethel College (before it was Bethel University) was taking a personal stand by 1957. The daily chapel services became the initial platform of awareness. Chapel speakers called Bethel students to recognize equality regardless of race. President Lundquist asked Martin Luther King, Jr. to speak at a convocation chapel in 1963. Luther didn’t make it, but this request by the college president sent a clear message to the community: Bethel stood behind the Civil Rights Movement.

The action brought initial disapproval from a few members of the General Baptist Conference, however, Bethel continued to press further into supporting the Civil Rights Movement, according to the Bethel University History Collection archives. But it wasn’t just faculty taking a stand. Students began to actively participate in social advocacy as well. Students utilized the Clarion to inform peers of participation opportunities.

A 1960’s issue of the Clarion  reported: “Student Senate has participated in this movement by sending telegrams of sympathy to the students at Fisk university in Nashville and a telegram to the Mayor of Nashville asking for justice for the jailed students.”

Bethel’s Student Senate met to make a public statement of support. In 1961 Minnesota’s Fair Housing Act was put into place. Administration and faculty took subsequent action by hosting open forums and discussions on campus, and the Clarion became a popular space of student voice and passion.

By 1964, as the Civil Rights Movement continued to accelerate, Bethel students were doing more than just discussing and writing. Seven years after the college’s initial investment, students began to take action. A 1964 issue of the Clarion  reported that two students spent the summer selling dictionaries in the ‘Black Belt’ of Virginia and brought back heartfelt accounts of segregation and the education gap.

In response to the Selma, AL demonstrations of 1965, 50 Bethel students marched to the Minnesota capitol in an expression of solidarity for their brothers and sisters in the South. There was also a higher rate of students joining off-campus urban non-profits.

Faculty made a public statement in 1965 with wringing words of truth:

“Furthermore, we, pledge in the name of Christian compassion and social justice to throw the weight of our influence behind the drive for an integrated society…We all share in the cancer of hate and indifference. We must examine our hearts and determine to redouble our efforts on behalf of full equality for all people throughout all the world.”

Today, Bethel has a full major for reconciliation studies, but this type of coursework was not available until 1958, when a student wrote an opinion piece requesting a course called “The Negro in American Culture.” Administration listened to this request and over 100 students attended the first class session. This class and the other movements on Bethel’s campus were just a few of the many steps highlighted in Bethel’s historical archives. But what we see in the archives is this: In the midst of national unrest, Bethel College chose to have serious conversations about discrimination, diversity, reconciliation, and race.

A special thanks to Bethel’s Archivist Diana Magnuson and the History Professors for gathering resources and materials for this research.

0 comments on “Into the Archives: Bethel and the Civil Rights Movement”