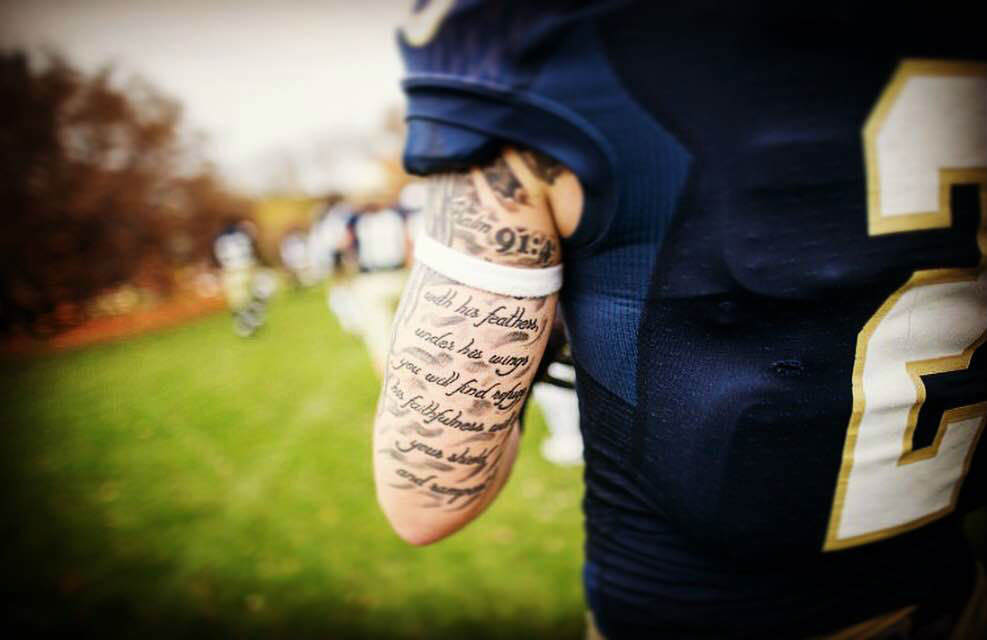 Ryan Kopca, linebacker for the Royals, has a newfound motivation to be the best possible athlete, student and man for his baby boy.

Ryan Kopca, fifth-year senior linebacker, is not one to cry. He’s a quiet, six-foot-three, 210-pound man with tattooed arms and wispy dark locks that jut out from his football helmet.

Five months ago, he bawled.

Keegan Thomas barely cleared five pounds when Kopca held him for the first time, two weeks before his due date. He looked like Goliath holding a porcelain doll. Kopca couldn’t hold it together.

“Four years ago, I never imagined I would have been there. It was such a drastic change.”

Just over a year ago, Kopca received a phone call from his girlfriend at 7:30 in the morning. He didn’t believe her until she sent him the pregnancy tests.

Yes. This was actually happening.

As a football player, biokinetics major, and soon-to-be-father, who — out of frustration — quit midway through his freshman season and earned grades of mostly C’s and D’s, motivation to change never seemed so pressing.

Keegan Thomas’ ocean eyes, naked smiles and awkward sneezes transformed Kopca’s world when he entered it June 2. Something inside him snapped. His priorities shifted from having a fun college experience to developing this undersized, angular baby boy into a strong, honest, Godly man.

Keegan is a quiet baby unless he has an empty stomach or a full diaper. He loves reading Dr. Seuss books. His face contorts in the most amusing way when anyone blows on it. And his passion for food and midday naps aren’t the only qualities he will inherit from his father.

“I want to teach him how to be a good man,” said Kopca. “Not many men in this society have the morals I was brought up with.”

Talk about growing up fast.

Logan Lisle, Kopca’s close friend and teammate, saw his transformation firsthand. He says he sees him in the library all the time.

“The first four years he wasn’t about studying. Ever since he’s had a kid, he’s never been so into studying and getting good grades,” said Lisle.

Every day Kopca rolls out of his bed in New Brighton, drives 10 minutes to make it to class at eight, puts his nose in textbooks until three, scars the practice field with cleat marks until six, finds odd times throughout the day to fulfill his 10-15 hour-per-week internship at Fitness First, and — oh yeah — he has a kid to provide for, too.

He’s earning A’s and B’s in all his classes.

His parents support him, also. They aided Kopca financially, enabling him to finish out his final season on the field with his best friends and teammates.

“If I knew financially I couldn’t have helped, I would have quit football,” Kopca said.

His coaches are some of his largest supporters and role models. From the mid-practice side notes to Friday afternoon devotionals to post game talks, Kopca says they set the precedent for the kind of man he wants to be someday.

Mike Fregeau, defensive coordinator, has grown in his relationship with Kopca this past year. The biggest area in which he’s noticed Kopca improve is off the field.

“He is being responsible and admitting when he’s made a mistake,” Coach Fregeau said. “Hopefully he will learn from that because accountability is really important. He’s been phenomenal.”

Kopca doesn’t see Keegan on a regular basis, but he says he’s doing his best to change that.

When number two for the Royals pumps his arm after an arresting tackle, his dark hair streaming backwards in the breeze, take a closer look at his tattoos.

On his tricep reads Psalm 91:4 — “He will cover you with his feathers, and under his wings you will find refuge: his faithfulness will be your shield and rampart.”

He also bears a wing tattoo and a heaven scene.

He got them for Keegan.

0 comments on “Motivation is Born”