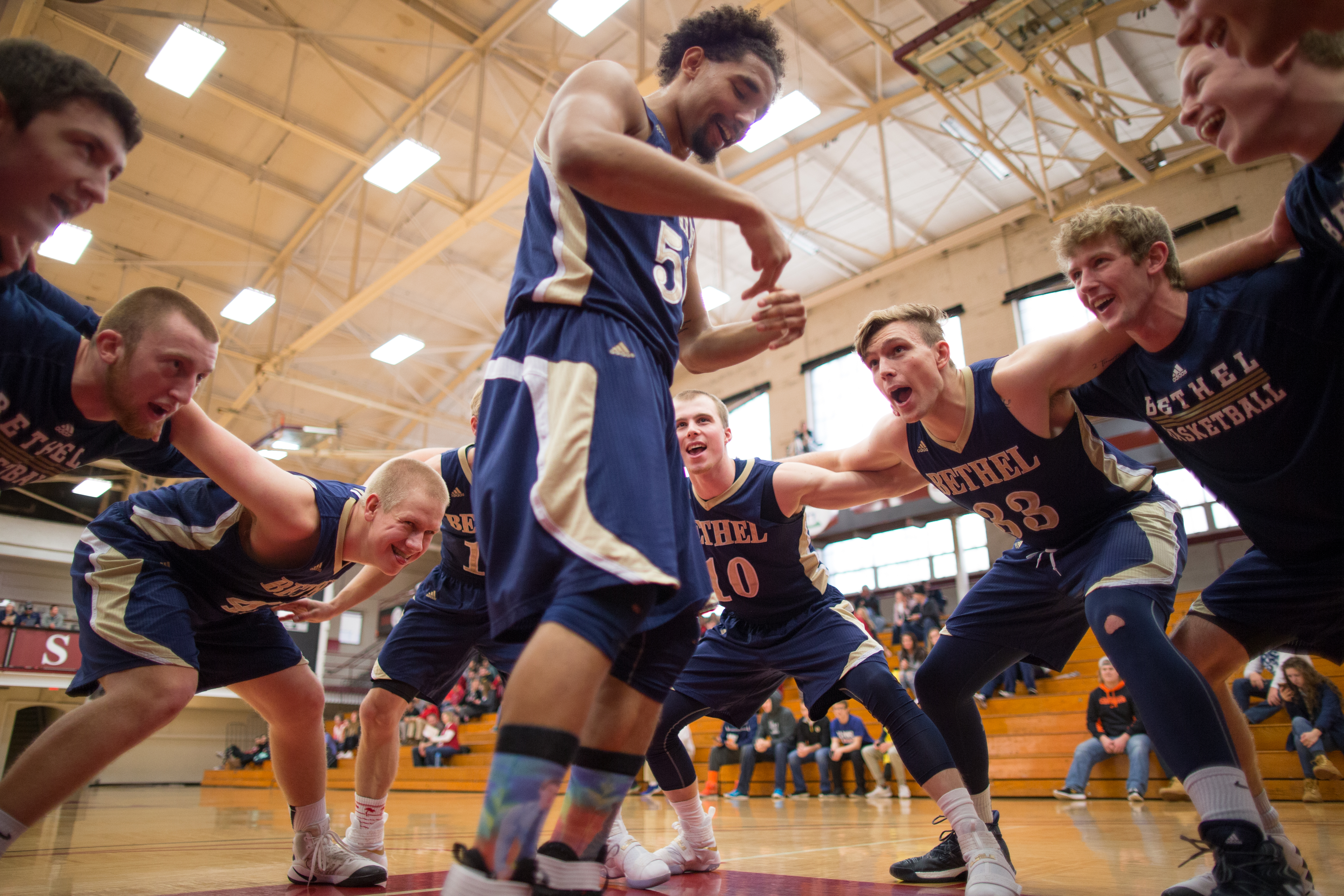 Bethel athletes share their stance on whether or not celebrations create a better (or worse) atmosphere to their individual sport.

Inside the Robertson Center, the women’s basketball team battles Concordia College-Moorhead, hoping to continue their 10-game winning streak. Bleachers packed with Royals’ fans anticipate another victory. While the coaches and fans are eager to support, the bench creates a rowdy environment. The younger players encourage each other with constant screams and claps. Supportive of the players on the court, the bench celebrates as they watch the Royals’ defeat the Cobbers 74-49 last Wednesday.

One of sport’s greatest entities is the celebration. Triumphs are visualized through trendy dance or the use of props. Soccer players surf through the grass while hockey players glide on the ice after a hard-fought goal. Regardless of the sport, fans look for sports to showcase of emotions on the highest level. Social media platforms, such as Twitter, admire athletes’ antics on the field. Pittsburgh Steelers wideout Antonio Brown twerks his way to the endzone against the Washington Redskins. Youth football players replicate Carolina Panthers’ quarterback Cam Newton as he struts through the end zone, finishing off with a dab.  While others stand in shock as Cleveland Cavaliers star forward LeBron James hits his patented ‘Silencer’ to quiet down a hostile crowd. Celebrations come in different styles, however, they all strive to showcase the love and passion that makes sports great.

Women’s basketball guard Shanni Moorse believes celebrations (in basketball) are essential to keeping up the energy, especially from the bench. “Our bench this year has been amazing” Moorse said. “They have unrelenting cheers and screams. From quiet, Wednesday night away games, to packed Saturday double headers, the bench has done an outstanding job keeping those on the court pumped up and motivated.”

Depending on the sport, the usual celebration differs. Basketball offers a fast-paced style as players transition to defense, which limits the time to bask in the glory. Comparative in style, hockey and soccer involve non-stop action where celebrations follow after a hard-fought goal. Football presents a slow, methodical pace which only open celebrations for bone-crushing hits or nonchalant touchdowns.

A sport that prides itself on excitement and emotion is volleyball. Senior all-conference setter Katie Lubben describes the joy that comes from celebration. “Nothing worth having comes easy,” Lubben said. “So when you are able to reach your goals and achievements, you should get excited about that! It is a huge momentum builder.”

However, opponents view certain celebrations as excessive, and distraction towards the team. The National Football League (NFL) takes a hard stance against excessive celebrations, costing team’s 15 yard penalties. The National Basketball Association (NBA) quickly calls a technical for taunting or delays of the game. Regardless of the love of celebrations, the line drawn between celebrating and taunting stands clear.

Men’s soccer all conference forward Danny Jaderholm admires the joy expressed by professional athletes while celebrating. Jaderholm enjoyed the Iceland national team’s Viking war chant, which included the stadium filled with over 100,000 fans awaiting a simple beat of a drum while clapping rapidly. However, the senior views taunting as “excessive celebrating” once an individual distances themselves and target a player or team.

“When (and if) you have an entire team taunting an opponent, something big is wrong with that organization,” Jaderholm said. “Celebrating is about sharing the elation of scoring (or performing) well with your teammates and supporters.”

While there are negative and positive aspects to celebrations, athletes such as Bridgeport Tusler, believe celebrations display a form of expression. “Celebration to me shouldn’t be looked into on whether it is right or wrong” Tusler said. “I feel the more you dissect celebrations, the more you can find negative than positive.”

Tusler, who’s passionate athleticism displays of the field and court, feels casting too much judgement on the rights and wrongs takes away from the event. “We are always judging or comparing ourselves to others instead of admiring the event that just took place.  Overall, I love celebrations. They are a form of expression.”

0 comments on “Turn down for what?”