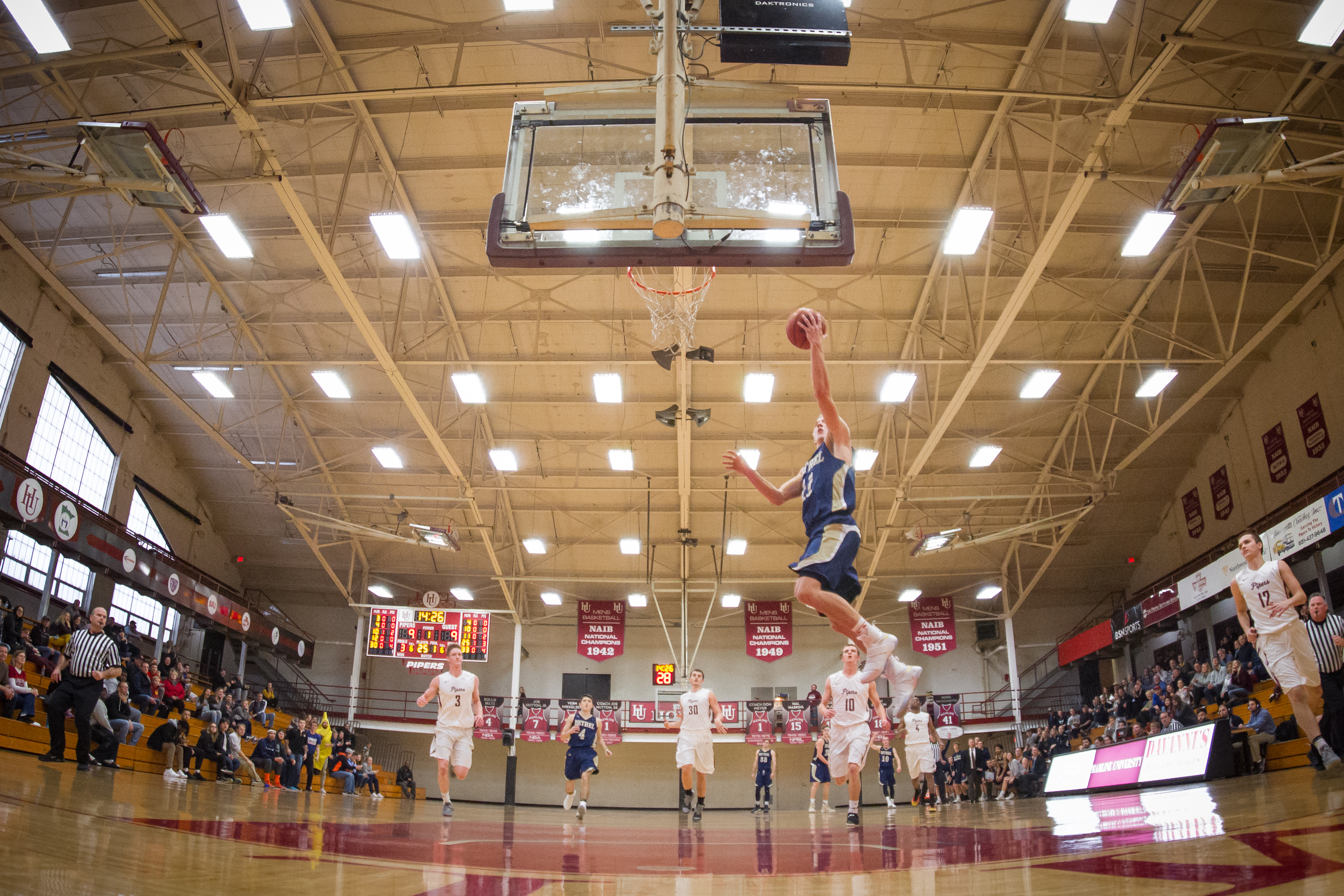 Three athletes from the men’s basketball team have achieved 1,000 points, but they are too focused on winning to care.

Seniors Trevor Hall and Brycen Wojta exchanged loaded smiles from across the table as they recalled beating St. Olaf for the third time their sophomore year.

Their eyes played back the moment like an old VCR. The hollow clamor of basketball shoes hitting the carpet hallway. The juiced-up bellows of accomplishment. The echo of subdued laughter in St. Olaf’s empty poolroom that crept to hysterical as Coach Meier shrugged and cannonballed into the chlorine.

Trevor Hall, senior guard for the Royals, only recalls the sweet taste of victory matched with the unconditional camaraderie with his teammates in the midst of a loss. He only thinks about the snap of the ball as it zips across the court into Bridgeport Tusler’s hands. He only worries about making sure his opponent doesn’t slip past him on a backdoor cut. His goal is to focus enough to sink 25 shots in two minutes without going through the motions during an early-morning drill.

Prior to Wednesday’s game against Concordia, Hall was two points away from 1,000 points, and he didn’t even know it until after Monday’s home victory against Gustavus. He didn’t care.

Senior guard Brycen Wojta achieved 1,000 points last year. He found out when the crowd started cheering for no apparent reason in the middle of a St. Mary’s game on the road. His girlfriend knew before he did. Now he’s rounding 1,500,  and he couldn’t care less. Neither could junior Bridgeport Tusler, who recently reached 1,000 points in a home victory against St. John’s.

The 1,000-point club is nonexistent for the Bethel Royals. It’s not even on their radar.

Tusler sat with two Gatorades and an energy drink on the table in front of him, hours before tip-off against Gustavus.

“I gotta be hydrated for the game,” he said. “And I need caffeine.”

He chuckled. He never talks to his teammates about scoring 1,000 points. Actually, he said, sometimes they talk about how much they don’t want to talk about it. Before the Royal’s loss against Carleton, somebody told him he was nearing 1,000 points and it angered him. He didn’t want to think about anything but winning.

Tusler’s selflessness springs from his resiliency. He constantly pushes back the line of satisfaction, so he is never content with his progress – he always wants to get better.

Wojta fell in love with the leather ball and net at the age of 5. He plays for sheer passion, and it shows. His parents, siblings and girlfriend cheer him on at every game. He’s too preoccupied with the lessons he’s learned from the sport to think about the points next to his name, and, as his basketball career comes to a close, finishing out his passion.

“Basketball at Bethel has taught me how to overcome adversity and temporary failures. Life will throw many things at you but there’s always a way to get past the obstacles,” Wojta said.

The culture of men’s basketball at Bethel revolves around sacrifice. Early morning practices, offseasons in the weight room, teammates yelling and pushing each other. Selflessness fosters winning seasons. The team never settles.

“I think one of the biggest pieces of advice I have received from the program is the idea that we have never arrived,” Hall said. “One of the most dangerous things is to become satisfied and content with where you’re at and think you can’t get any better.”

So it’s no surprise that Hall had no motivation to hit his 1,000 points on Wednesday -which also happened to be senior night – unless it would help his team win.

Within the first five minutes of Wednesday’s game against Concordia, the ball rolled off his fingers into the hoop. The crowd stood and cheered while Trevor Hall’s thousandth point was announced during a timeout. He jogged back to his place on defense as if he’d only scored his 756th point. Expressionless. Focused.

“It’s just one of those things that happens,” Hall said with a shrug. “Not a huge deal. We don’t celebrate that.”

Like Wojta, Tusler and the rest of the team, he’s just looking for new ways to learn from his mistakes and build off his strengths. He just wants to win.

Over ten consecutive years of basketball, hundreds of line sprints in stuffy gyms, thousands of tip-offs and half-time buzzers and time-out whistles. 1,000 points made.