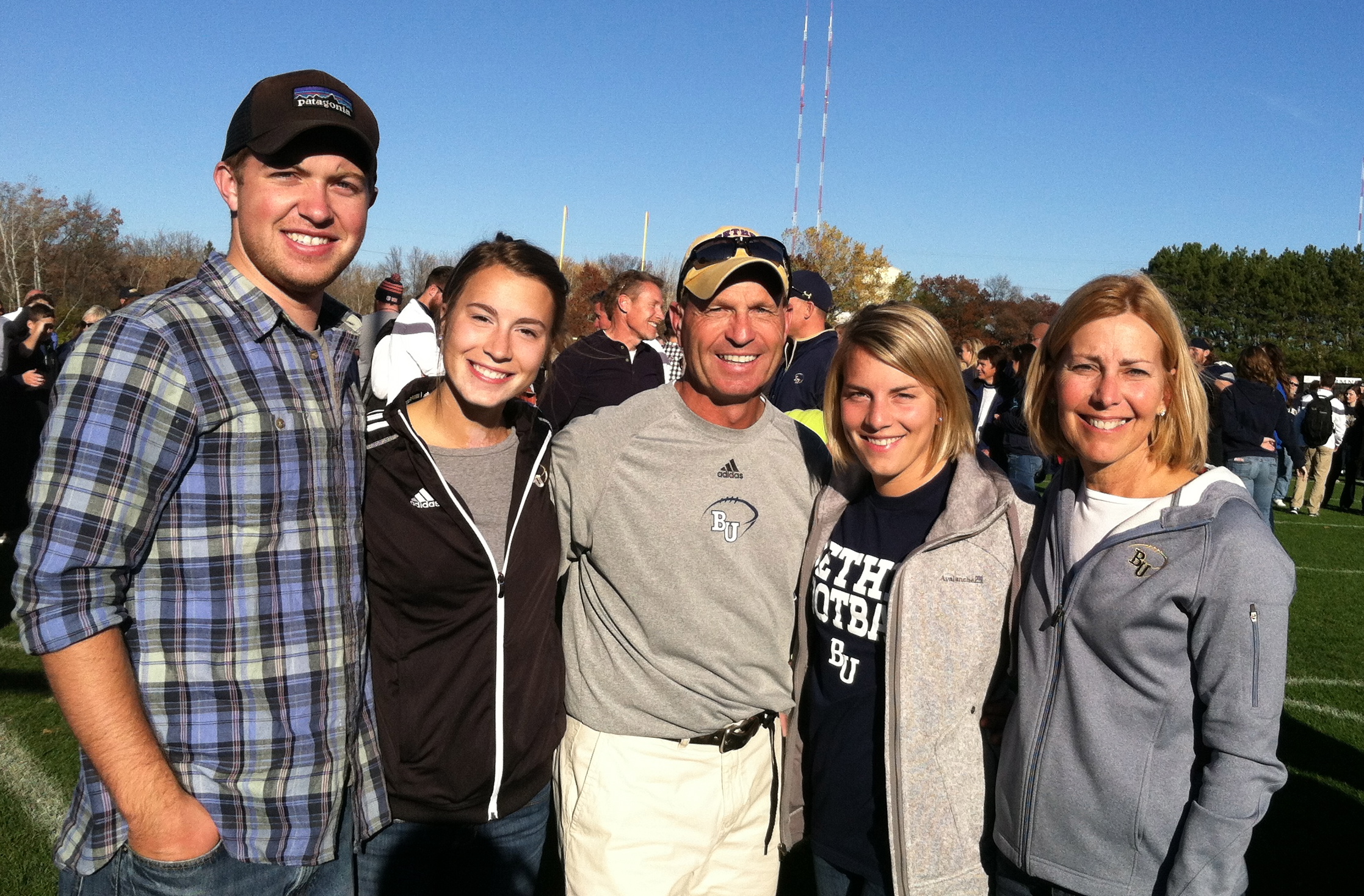 Mike Fregeau, defensive coordinator for the Bethel football team, has recently decided to take a step back from coaching on behalf of his wife and two daughters.

The ‘82 version of Michael Fregeau — with an ego almost as out-of-control as his hair– had his eyes fixed on the effortless serves, dives and spikes of the pretty blonde as he sat on the Robertson Center bleachers.

When his friends said she wasn’t his type, he asked her out for coffee.

A few years later, she took his last name.

Fregeau’s gaze averted to his restless hands as he tried to swallow the lump in his throat. His thumb pressed down on the rear of the pen like his mind snapped through the pictures: Click, click, click.

They lined the wall and scattered the floor of his office: track runners bearing medals around their necks, geared-up defensive backs pumping their fists, Fregeau sandwiched between his wife and daughters, a football collage that his athletes made which — to his dismay — features an oversized cutout of Fregeau’s face.

He refers to his athletes as “son”, but the woman who waits for him to come home from work every night is the driving force behind most of his actions — along with their daughters.

Sit with Fregeau for an hour, and you’ll uncover a translucent soft-spot: his wife and two girls.

Ask anyone he’s ever coached, and they’ll assure you: he is not a soft man.

A few years ago, Fregeau made a grave promise to his daughter, Courtney, on the way to the hospital as her best friend’s father passed away suddenly. He vowed to take action if he experienced any warning signs concerning his health.

Fregeau honored his promise this spring when he stepped down from defensive coordinator for Bethel football, ending his 18-year coaching stint with Bethel and a 32-year career in coaching. A bad case of vertigo and persistent headaches spawned by 80-hour work weeks signaled warning enough: it was time to hang up the hat.

But headaches were just a fraction of the reason Fregeau has decided step away from coaching. He also wants more time with his family.

Often he’d spend more time with his colleagues than his wife. During the season, Fregeau’s life revolved around football. Even when he was at home, he’d be watching film or thinking about practice plans for the following day.

And his career life thrived.

He coached 22 track and field all-Americans. He took a group of four men to nationals, where they took second place in the 4×400-meter relay. He even coached his daughter, Courtney, into nationals and helped her reach her goal of becoming an all-American in the 400-meter dash.

Fregeau admitted that it was easy to get consumed in the competition.

His words broke into cracked fragments as he expressed his admiration for his wife, who has always held their family together when he couldn’t.

She wakes up every morning at 5:30 to brew a pot of coffee and read her Bible.

“She’s the most Godly woman I’ve ever met. The rock of our family.”

Fregeau’s desire to become a coach grew its roots when he played high school ball in upstate New York. He wanted to invest in the lives of athletes with the same amount of intensity and intentionality as his high school coach, who cared more about his life off the field than on it. He even cosigned on a loan to allow Fregeau to buy a motorcycle.

“My coach was tough on me… but I knew he would do anything for me,” Fregeau said. “I knew from his example that I wanted to use football as an avenue to reach younger people and try to make a difference in their lives.”

In 1998, he received a phone call from Bethel’s head football coach Steve Johnson

Johnson had to look down at the desk to curb the tears in his eyes as he remembered hiring Fregeau. The day he added Fregeau to his team of coaches, he gained a man who would pray for his wife and children, a fearless motivator who would yell into a linebacker’s ear until he finished his squats, a coach who would pose as a father figure in the lives of athletes whose hometowns are far from Bethel.

Coach Fregeau has stood on the sidelines next to Coach Johnson for 160 of Coach J.’s 200 wins.

“Coach Fregeau is the epitome of who we want to attract,” Johnson said. “We want tough guys who are sweethearts. Compassionate tough guys. That’s who he is.”

Fregeau is old-school. He’ll open the door for the girl walking behind him. Players know to take off their hats during meetings. He’s not afraid to call someone out. He doesn’t accept excuses. He prefers to be referred to as “Coach”.

Dawson Brown, sophomore linebacker, admires Coach Fregeau’s caring heart matched with his tough love. One time during practice, he drilled Brown for not hustling enough. Immediately after the practice, Fregeau explained to him what he needed to improve on.

“It sounds weird because he’s such a yeller, but he’ll start crying when he talks about his family. I want to put in that same effort with my family someday,” Brown said.

Brown is going to miss walking into Monday morning meetings with breakfast and a prayer awaiting him. Fregeau always bought bagels for his position group before they dove into devotionals and watched film.

Fregeau tells his athletes that he needs Bethel. David Shepler, senior linebacker, disagrees. Bethel needed him. Fregeau is the best coach he’s ever had.

Josh Dalki, junior linebacker, concurs. “He was a football coach yes, but he made it clear that more importantly he was a man of God, a father, and a husband,” Dalki said.

JJ Wahlquist, freshman defensive end, received a call from Coach Fregeau his sophomore year of high school. Wahlquist and Fregeau had never met in person, but Fregeau was the first person to call him after his knee surgery.

“He’s the most caring person. He truly wants to know how your life is going,” Wahlquist said.

The lists go on and on.

Ever since he met Fregeau and Johnson two years ago, McElroy has wanted to coach at Bethel. He wanted to be surrounded by coaches who put God, their wives, and their children before their careers.

Fregeau’s separation from coaching is bittersweet. He looks forward to being able to watch a movie with his wife. Maybe go on a walk with her. Maybe relax on the couch and read a book. Maybe have dinner with his daughters.

When you’ve been working seven days a week for 32 years, there’s a lot of things you miss out on. He’s got time to make up for.

He’s not retiring. He’ll be hanging around the program, managing the Sports and Recreation Center and overseeing football and basketball games.

Coach Fregeau wants his players to have daughters who are reminded every day of how beautiful and capable they are. He wants their future sons will know what it means to be the head of a household. Even beyond graduation, he’ll expect them to open doors for the woman walking behind them, to pray before meals, to call each other out when needed. And when they stand across the altar and say “for better or for worse,” — hopefully with hair more subdued than his — he hopes they mean it.