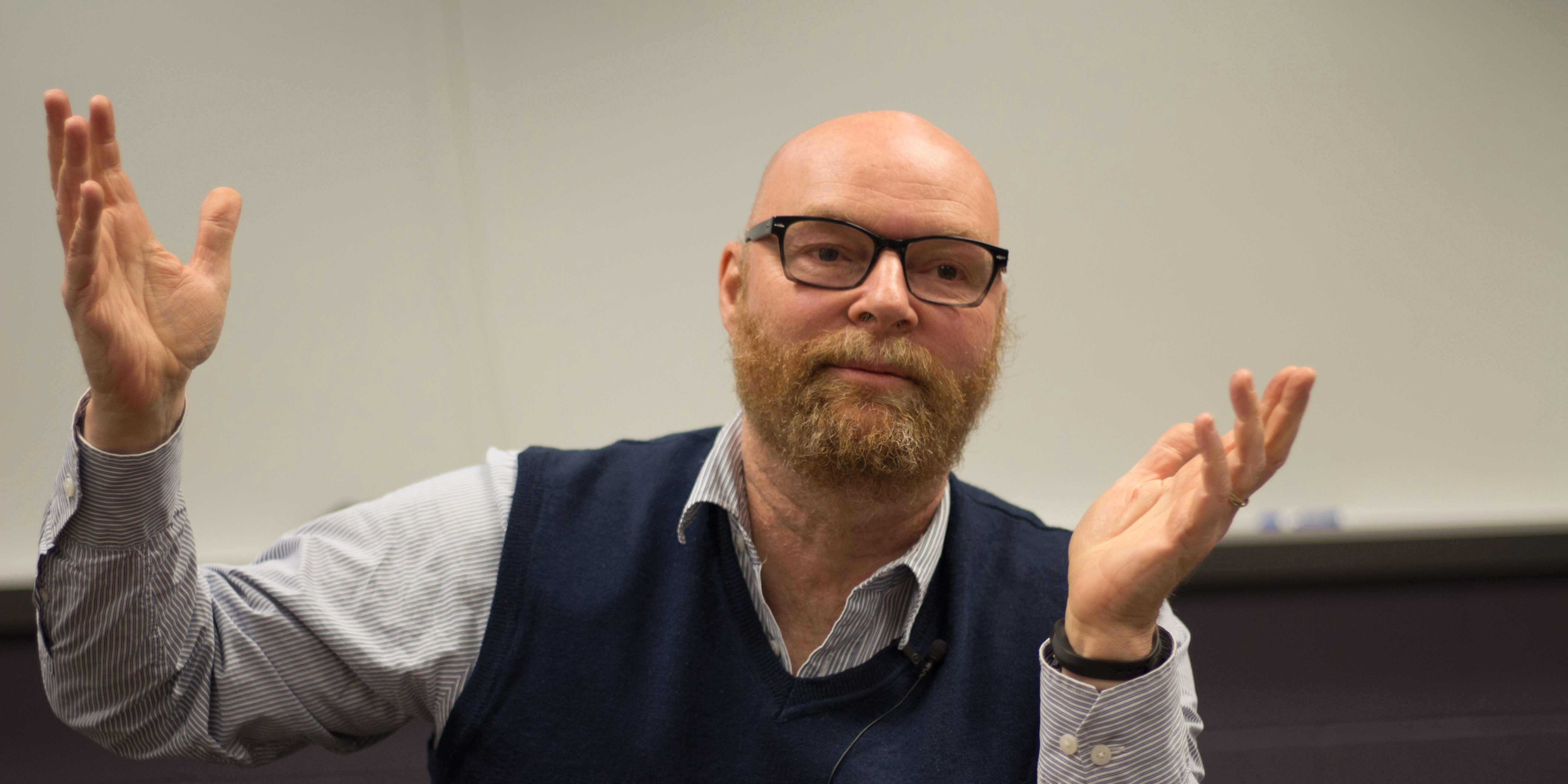 Euan Kerr is an arts reporter for MPR News. Kerr loves punk music and criticizing the Oscars in his Scottish accent. From Scotland, he came to America to go to school for broadcasting. He found some jobs and a wife, all of which he told to an arts and culture reporting class at Bethel University. He can be followed @euankerr and on his Cube Critics Podcast.

I started out as a DJ during the punk era. The band which I was really into was a band called The Skids.

I’m one of the people everyone’s concerned about.

I spend part of this morning watching a movie called Kedi, which is simply a woman following cats around the streets of Istanbul. I hate cats.

Luckily, I’m a guy so I have no emotions.

Edinburgh was beautiful. I had to get on the bus and go to school every day, and I stood in the shadow of a medieval castle each morning for 15 years. But I hardly noticed it.

Stories can add a little flavor, maybe too much flavor, but it’s always interesting to hear what’s going on behind the scenes of people’s decisions and why they end up doing weird things, like move to America because of Elvis Costello.

I try to write in my journal every day. I think at some point I would love to sit down and write a novel.

One of the nice things about trying to be professional is that you can build up a wall internally. You get the job done and then you collapse in a heap.

Movies are actually going through a renaissance. It used to be so expensive to make movies, and now there are good feature films made on iPhones. Part of the challenge as a cultural reporter is looking out for those films.

I love Emma Stone, and I have a big man-crush on Ryan Gosling.

As one of the few people who is doing cultural coverage, there is an element of desperation there that is kind of tough. You’re dealing with people’s dreams, and I can only do maybe three stories a week.

One of the challenges we face as cultural reporters is what is the definition of that word because culture can literally mean just about any any human endeavor.

I went with the Minnesota Orchestra to Cuba. It was utterly mind blowing.They had two concerts in Havana and there was a moment on the second night where the orchestra walked on stage and they played the Cuban national anthem. We all kind of expect to hear the national anthem [in the U.S.] but in Cuba it was rarely played. The crowd was stunned and it was just unbelieveable. There must have been 800-900 people bawling their eyeballs out, singing the national anthem…and that’s when my batteries ran out.

Get yourself a good editor and work with him or her because your work will only improve.

The world is getting smaller. Things we didn’t think would have any impact on us have a huge impact. Knowledge is power and the more you can understand about what is going on the better.

We live in a culture that has been shaped by faith. And to deny and ignore that is stupid.

This job is a vocation. There’s a lot of skill involved, there’s an element of luck, sometimes being in the right place at the right time (is beneficial). It’s a fun ride and sometimes it’s deeply, deeply frustrating, but hopefully you can always learn more.