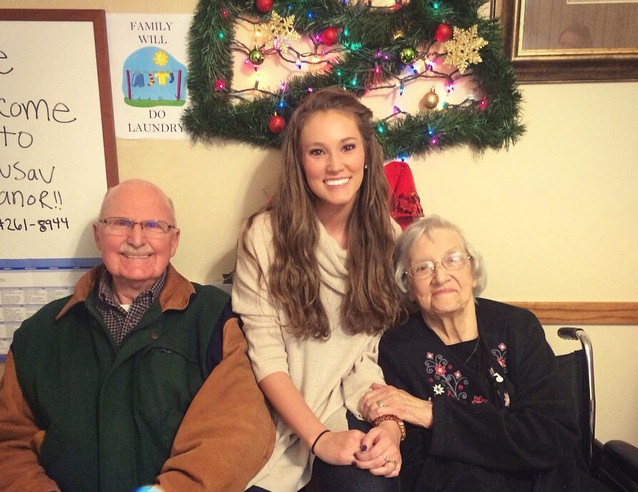 How an 80-something Grandma lived her life by laughing with the Lord.

Grandma Connie Weko shoves a pile of grimy laundry into the machine that lives in the musty basement, though it doesn’t pay rent. As she peers into the dark core of the appliance that is now vibrant with cotton saturated in color, she notices something strange – headbands, as she calls them.

Cousin Lauren had been staying with our grandparents for a few months in Wausau, Wisconsin, since she had been hired for a news anchor and television reporter position at WSAW Channel 7 News, a CBS affiliate. Although she had found an apartment in the city, it would not be move-in ready for a few months. With open arms, Grandma and Grandpa Weko invited her into their little red house to live. While this home was a place for sleeping, eating and community, it also doubled as a secret comedy club, starring Grandma Connie living her everyday life in a sitcom.

Lauren was only allowed to live in the house if she followed three rules: go to church every Sunday, let Grandma do her laundry occasionally and allow Grandma to force-feed her more chocolate peanut butter Rice Krispy bars than she could digest in one sitting.

She made the best Rice Krispies.

Lauren followed the rules and let Grandma Connie wash her laundry from time to time. But little did Connie know that tiny lace headbands would infiltrate her steel machine, and her entire home.

At dinner time one evening, Lauren returned home for a quick food break before heading back to the station for her late night news broadcast. Grandma had already washed several loads of Lauren’s laundry earlier in the morning. This time gap had given Grandma Connie too much time to think about why someone would need to wash so many headbands at once, if ponytails really required more than one headband, or maybe Lauren just needed to find a new hair-do. Then again, Lauren never wears headbands, and her shiny blonde strands always rest comfortably on her shoulders.

On her way out the door, Lauren kisses Grandma and Grandpa on their foreheads, grabs a chocolate Rice Krispie to go, and freezes. In the middle of the kitchen, Grandma pulls out the laundry basket full of freshly clean clothes. The rice krispie crumbs begin to lodge themselves in Lauren’s throat.

She then proceeds to put the black lacy headband on her fluffy white-haired head.

Thongs. They were thongs.

It was their little secret.

As a pastor’s wife, Connie lived penny by penny, but always had freshly baked goods wafting from the parsonage in case somebody from church stopped by.

Connie became everybody’s shoulder to cry on, listening ear, source of gut-wrenching laughter, and she always made sure to remind them of God’s grace.

He had given it to her many times.

When living in Rhinelander, Wisconsin, in 1959, Connie was invited to a Fuller Brush Party. This would be quite similar to today’s Avon makeup parties or Tupperware parties. It was the end of October, which meant her wallet was completely empty minus the tiny grocery budget, which was used to feed all six residents of the Weko household. Connie was reluctant to attend the party, fearful it would be rude to show up and not be able to purchase a single item. The host of the party, a dear friend, encouraged Connie to attend anyway, as she was simply wanted for her enjoyable company.

The Fuller Brush party was more than she expected. Overwhelmed by the natural beauty and bath products, as well as the microfiber cleaning merchandise screaming out to her from the packaging, Connie became a victim of her pride. She felt obligated to buy an item or two so she was not the only one there who did not participate in buying products. The items called out to her, ensuring her that they were life-changing and would save her time and money in the long run. Connie lent her listening ear to them. She caved. A giant red and white sign soothed her fears as it read “BUY NOW, PAY LATER!” So she did. Or, she thought she could.

When she returned home and used her new items, they did seem absolutely life-changing. The makeup glided on nicely. The wrinkles seemed to lessen. The time it took to clean the kitchen was cut in half. Then the calendar changed from October to November.

It was time to pay off her homemaking gamble.

She transferred her items from the brown cart onto the brown and red checkered germy countertop, walking a few feet forward to join the cashier eye-to-eye. Before he could ask if she wanted paper or plastic, she told him paper, and reached for her wallet.

Squinting to see into her wallet, she pulled out three green dollar bills.

She left the store, sans groceries, in tears.

Tomato soup was mixed in her meatloaf recipes, casserole dishes, and joined grilled cheese sandwiches for dinner every Sunday afternoon while the family watched “Lassie” before church.

Reluctant to tell husband Lester about her purchases, she went home and spilled her soul to the only person she knew she could turn to. With a new episode of Bonanza on TV in the background, she kneeled at the bedside, the one without a headboard, and prayed to God. She asked for forgiveness for letting her pride direct her life. She prayed that somehow Lester wouldn’t know what happened, and she asked God for only one thing before returning to bed. Tomato soup.

It was the household staple of all household staples. Grandma Connie could make one can of tomato soup last for many meals. Tomato soup was mixed in her meatloaf recipes, casserole dishes, and joined grilled cheese sandwiches for dinner every Sunday afternoon while the family watched “Lassie” before church.

Grandma Connie was the prayer warrior of all prayer warriors, and she knew that if she could just be able to get her hands on one can of tomato soup, she would be able to somehow shush the family’s growling bellies for a week.

There was only one thing she didn’t see in the fridge nor the pantry.

“I woke up this morning and just had a feeling that you were in need.”

“I was praying this morning and God told me that you needed something. I wasn’t sure what, but I was going to the store so I thought I’d pick my favorite family up a few things and drop them by.”

Ladies from church, at half-hour intervals, brought overstuffed food bags, ringing the doorbell of the parsonage. When 4:00 P.M. rolled around, Connie had unpacked the contents of 21 brown paper bags. Connie peered into the small pantry to see 60 days’ worth of food for their family of six staring back at her. She folded her hands as tears soaked her newly wrinkled skin, thanking the Lord for His provision, and opened her dripping eyes.

She saw bread, Kellogg’s OKs, Cheerios, canned fruit and vegetables, boxed macaroni, peanut butter, mashed potatoes, bags of rice, canned meat, ketchup, ravioli, Little Debbie Swiss rolls, Fritos, powdered milk, and jars upon jars of Tang. While the pantry overflowed, the fridge was so crammed that the door would hardly shut without bodily force. There was only one thing she didn’t see in the fridge nor the pantry.

“God gave us a sense of humor because life is like a steam pot. Humor is the slow release so the top doesn’t pop,” Grandma Connie always said.

Grandma Connie was an accomplished journalist with work published in the Ladies Home Journal and the Rhinelander Daily News, among others. She also was a traveling keynote speaker for women’s conferences. During one of her speeches, she talked about her tomato soup experience – it later received the attention of a major publishing company, which wanted her to write out the story so it could be branded with its name. But, editors had a catch. She had to remove all references to Christ, God and praying. Connie laughed her white-haired Grandma cackle and refused, telling them that there would be no story without God’s humor.

“God gave us a sense of humor because life is like a steam pot. Humor is the slow release so the top doesn’t pop,” Grandma Connie always said.

February 1994 rolled around, and I popped into the world. My first birthday a year later and one week short was spent squishing my large head into a mega-frosted smash cake, surrounded by my three older siblings and two parents in Sioux Falls, South Dakota. Seven days later, my whole family headed off on a Royal Caribbean week-long cruise, visiting St. Thomas and St. Martin in the U.S. Virgin Islands, and stopping at a private island called CoCoCay in the Bahamas. Except for me.

Either my family lost the invitation to my own birthday party or forgot that first birthdays were extra important, but either way I was not touring private islands to celebrate my first trip around the sun. I spent my actual first birthday with Grandma Connie and Grandpa Lester in their little red home with my Afghan Hound, Kia.

I also brought my favorite stuffed clown with me. He didn’t have a name, but he terrified the life out of Grandpa Lester. The clown had a wind-up knob on his back, occasionally playing music in the middle of the night from my crib, which sat at the end of my grandparents’ bed. Now, every time I try to guilt-trip my mother into something, I enjoy reminiscing on how I was abandoned for my very first birthday. This always backfires when she reminds me that I got to spend it with Grandma Connie.

The sound was sweeter than the serenading of Michael Bublé harmonious butter melting into my ears.

Fast forward a few more years to 2000. We were having a mini-family reunion at our cabin on Green Lake in Spicer, Minnesota. Grandma started to experience fatigue and felt a headache coming on, so she took her gun-shaped cane and shuffled up the stairs to the guest quarters. She headed right to the mini-fridge in the kitchen to grab the cure-all – a bottle of cold insulin. Grandma Connie was a type II diabetic.

Even though she needed the insulin right away, she would wait until I stopped chatting the ears off of everyone downstairs to notice she was missing, and ran up to find her. We would sit on the moose-patterned wooden chairs at the light ebony wood table and she would slip off her wedding ring, and I would put it on my thumb. It was always a bit spacious for my narrow kid-fingers. The insulin bottle was chilly, but I rolled it between my palms like I never even noticed, listening for the clicking of the sterling silver against the frigid glass. The sound was sweeter than the serenading of Michael Bublé, harmonious butter melting into my ears.

Now the year is 2017, and I’m a senior nursing student. I have had many clinicals on medical-surgical floors in various hospitals where diabetic patients require insulin before each meal if their blood sugars run high. Each time I prepare the syringe for injection and roll the chilled bottle, I hear the familiar clinks – though not so sweet – and think of Grandma Connie.

Two years ago we lost Grandma Connie to a case of hospital-acquired pneumonia while receiving therapy after surgery for a ruptured patellar tendon. Even though she knew she was about to pass on, she experienced no fear and could not wait to be with her Savior. Grandma Connie was larger than life – and so was her faith. God’s unconditional love for Grandma Connie was as clear as her love for Him. Whenever I start missing her, I know exactly what to do.

Crack open a can of tomato soup.