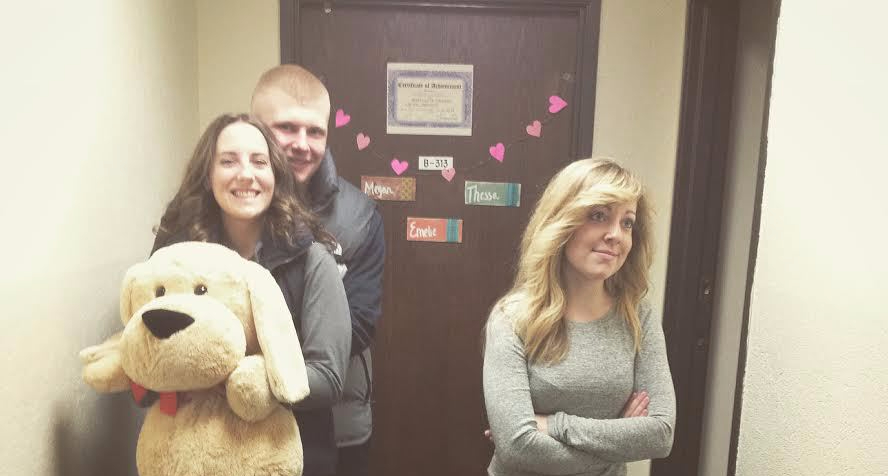 Like actors in Febreze commercials have gone noseblind, I’ve gone affection-blind over the years as a person typically sandwiched between couples. Then Bethel happened, and suddenly I was aware of my singleness. Unfortunately, “ring by spring” culture and commitment issues couldn’t coexist. One had to go.

The first time my sister brought a boy home, I was still a floundering preteen who liked Shania Twain and razored my eyebrows because I had yet to discover a tweezer. Jenny dated Cody for eight months before they broke up, at which time I selfishly thought, Yes, I have my person back! Then she met Buck and dated him for eight years.

My life has consisted of being the wobbly third wheel on her (and all my friends’) relationships. While they deserve trophies for their devotion, I deserve the participation prize for anyone who’s half-assed the world of dating.

Contrary to what you might believe, none of this sucked—until I came to Bethel University. While my status remained (mostly) unchanged, my mindset did not.

“You won’t make it four years without a significant other,” Sam said. “It’s a place that manufactures couples.”

Most colleges are plagued by hookup culture—mine suffers from “ring by spring” mania. But in a world of respectful hand-holding and long-term courting, I didn’t want a ring. I wanted a fling.

“We need to get you a boyfriend,” Tori said.

“I’ll ask Josiah if he can bring a friend for you,” Bri offered.

They have long passed the mingling stage of their lives and safely entered smitten territory. I represent the single of the group in need of saving, the one who wears black on Valentine’s Day and hisses at happy twosomes. I was content with this M.O. — for a while.

“Ring by spring” culture is an all-consuming disease. It infiltrated my mind, generating unfounded thoughts like he could be the one when I met a boy in design class who could hit the high note in September, or one in the Dining Center who hated asparagus as much as I did. Suddenly, everyone became a possibility that God himself ordained, and no one was left out of the equation that could solve the rest of my life.

Then the singles started dropping faster than bodies in a Tarantino film. Man Candy Mondays and mushy Facebook posts littered my feeds. My heart rate accelerated because I had two years left to find my ride or die, love despite the flaws, in sickness and in health soulmate. Only I didn’t. I had the rest of my life that existed outside of the Bethel Bubble.

I told myself I was too smart to be swindled into a relationship. I was wrong. Not about being in a relationship, but about being smart. My moods oscillated between wanting someone and wanting to be someone who didn’t need anyone. As a result, my short-lived romances featured boys who were bad ideas transformed into lessons learned. I found myself in recycled relationships: new boys, same mindset.

I laughed awkwardly, patting his rough curls for a moment before letting my hand rest on his shoulder.

The cycle didn’t end until Jay. He had an inflated ego and a poster of Mona Lisa holding a blunt that he referred to as the “Stone-A-Lisa.” Nevertheless, this was the boy who my heart beat untimely for. Jay came barreling into my life with a towel wrapped around his waist and a roguish grin on his face. My eyes flitted up and directly back down as he stood in the doorway.

“Sorry,” he apologized, not sorry at all.

He knew I’d been in Ty’s dorm room. Jay was his noisy next-door neighbor who had a reputation of sorts — one I thoroughly ignored.

“Just know what you’re getting into,” Ty warned me one night. We loaded skates and pucks into the trunk of his white Grand Prix.

His advice flew out the window as we tore away from the rink. Jay sat in the backseat beside me, his face illuminated by street lamps. We took a sharp left and he tilted into me, his head landing in my lap. I laughed awkwardly, patting his rough curls for a moment before letting my hand rest on his shoulder. He looked up at me, eyes like fireflies in the dark.

“You should be a waitress,” he said. “You’ve got a great smile.”

His words were laced with the scent of blue rasberry as they drifted up to me, and I faintly wondered how many girls had heard that line from him. I didn’t care. I made a habit of walking down dead ends.

Jay took me to see “Deadpool” a few nights after that. The next evening we went skating again, and this time he twirled me like we were the stars of “Dirty Dancing.” He pointed out constellations in the sky and I listened along, pretending I didn’t already know each of them.

This is what couples do, I realized. Bicker about nothing. Talk about everything. Get caught making out.

Then he didn’t text, so I didn’t text. He didn’t show up, so I didn’t come around. He was a drifter and I wasn’t clingy—two people more prone to fall apart than in love. The relationship collapsed shortly, just like it did with the Hawaiian skater-punk, the nice law student with glasses and an extra girlfriend and the quiet Swiss with dreams of playing in the NFL.

I feared I would end up with my mother’s regrets, so ironically I ended up with my father’s indifference.

But this romance had a bad aftertaste. And not because a friendship got mucked up or because egos got bruised after we parted ways without as much as a glance backward. It was different because he was the fourth incident—the one that made me realize my love life was no longer a series of accidental events. It was a pattern.

As a former psychology major who spent too much time self-reflecting, I wondered, How did this start? Was it because my first boyfriend dumped me at 8 a.m. in the locker bays after I gave him a mixtape with Marcy Playground’s “Sex and Candy” on it? Was it because 50 percent was a high divorce rate, and who was I to say that out of the billions of people in the world, I would choose the right one? Or perhaps it was simply this: I feared I would end up with my mother’s regrets, so ironically I ended up with my father’s indifference.

Thank goodness, I thought. A phenomenon exists for people like me. I diagnosed myself with commitment-phobia. Somehow this term has become synonymous with boys who don’t call and men who slip off their wedding rings. It hides behind a careless mask of bravado, a romanticized notion of an anti-monogamy generation. But commitment issues are miserable — not only for the person left standing in the wreckage, but also for the person who sunk the ship.

I met my sister at Royal Grounds to share my epiphany. We sat at the high-tops, our legs dangling. Suddenly, I couldn’t express my thoughts. She was in an eight-year relationship, an escapee of the cycle. She wouldn’t understand, would she?

“So,” I murmured. My throat ached as I tried desperately to say the words. “I think something’s wrong with me.”

“What is it?” Her concern made my eyes sting.

I wanted to cry, so instead I cackled. “I might be emotionally unavailable.”

She looked away, eyes reflecting the light from the windows. “I know how you feel.”

“I did know,” Jenny insisted. “Then I found someone who made me feel different.”

I’d spent my summer swallowing chlorine with YMCA kids and attempting not to get shoved down by the 10-year-olds who were taller than me.

For the first time, I wasn’t content with my relationship style. Turns out commitment issues and “ring by spring” culture don’t mix. There’s a thin line between dating around and forcing love, and I walked it like a teetering drunk pulled over on the side of the road — wildly swinging toward a future husband, then vomiting at the thought of being in a real relationship. After doing this nonsensical dance for a year, I’ve finally found some balance.

Sophomore year came fast. I lounged around in the new apartment by myself, flattening my Rosie the Riveter poster and hanging up my flannels, when a knock sounded on the door.

“Hey,” Jay stood outside with a lopsided grin. “How was your summer?”

“Busy, but good.” I lifted a shoulder.

This was a lie. I’d spent my summer swallowing chlorine with YMCA kids and attempting not to get shoved down by the 10-year-olds who were taller than me.

Jay lingered, one foot lodged in the doorway.

I was refering to my new roommate. And his new girlfriend.

“I’ll wait until she gets back,” he said.

Aaron had dark eyes and a tattoo of the Minneapolis skyline.

He then introduced me to Drake’s new album and attempted to dunk my head in the toilet. This was characteristic of our interactions, considering he had somehow wound up my best friend. I rooted for Jay and my roommate as they joined the others in smitten territory, because Jay had gone from the boy who ditched to the boy who changed. I thought maybe it was time for me to do the same.

That night Jay invited me to see his dorm. It smelled like dirty laundry and was plagued by denim couches. I said hello to his roommates — all of whom were playing Madden and cursing creatively — along with a boy I’d never seen before.

“Have you met Aaron?” Jay asked.

Aaron had dark eyes and a tattoo of the Minneapolis skyline.

We lasted a month, but for once it wasn’t me — it was him. I reclaimed my third-wheel status with a new outlook: to no longer be the girl who played with fire, but the girl who learned from her scorched past. If I don’t have a ring by 40, I could always live with Jenny, Buck and their two bulldogs in the country — happily ever after.

0 comments on “Love Series: The struggles of a chronic third-wheeler”