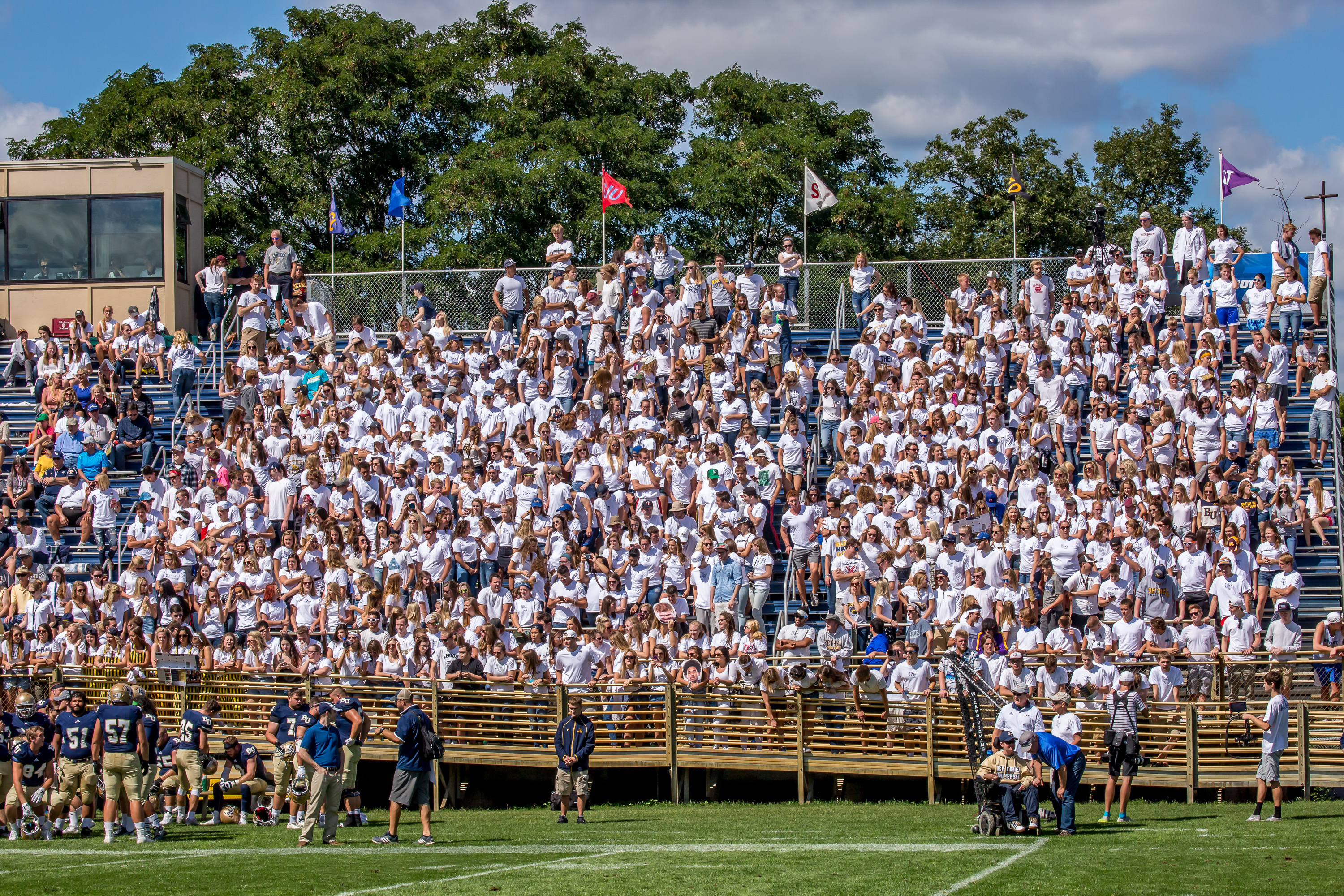 The student sections of institutions in the MIAC conference differ from school to school.

As time expired on Saturday, Sept. 24th at Clemens Stadium in Collegeville, Minn., a sea of purple clad fans stormed the field. The University of St. Thomas had defeated Saint John’s University in the 86th meeting between the two schools by a score of 33-21 in front of an announced crowd of 16,514. Sean Bannigan, a sophomore at the University of St. Thomas hopped the student section gate and dashed to midfield, celebrating the victory with his fellow Tommies.

“It was a blast because the atmosphere is so electric,” Bannigan said. “Storming the field at Saint Johns, while (they) has to watch is priceless because I’ve had to watch them do the same at St. Thomas.”

Winning on the road in college sports is a difficult task at hand, no matter the difference in talent between the two teams.  For most colleges and universities, the home crowd is louder and more invested than the away teams. Some crowds are loud, some are quiet, some are nice, others are mean.  How do some of the Minnesota Intercollegiate Athletic Conference (MIAC) student sections match up with each other?

“I would say that of the teams we play in the MIAC, UST has the rowdiest and largest student section,” senior St. John’s line-backer Carter Hansen acknowledged. “[UST students] pack the end zone and get very into the game with cheering and chants, especially when the action is on that side of the field.

With MIAC football games having the largest attendance numbers of the 20 different MIAC sports, Taylor Trautman, the right-side hitter for the Gustavus volleyball team has first hand experience playing in front of loud student sections that weren’t for football.

“Our fans are phenomenal,” said Trautman. “The last two years in our gym for the MIAC championship, our bleachers have been filled and the noise level so excessive at times you could not hear your teammate talking right next to you. It is an unreal experience.”

Trautman said she had never dealt with any ravenous fans on the road.

“St. Ben’s and Hamline, their gyms were just very loud with students,” said Trautman. “I’ve never experienced a ‘bad’ student section, just the classic cheers ‘you cant do that’ … but those sort of things are just part of being an athlete.”

When asked about his experience with away student sections, Hanson couldn’t remember anything specific.

“I have been heckled from the sidelines by fans before,” said the St. John’s linebacker. “But I don’t pay too much attention to what the fans say or think. I stay very focused on the game.”

With the different varsity athletics teams at each school in the MIAC, student sections may vary by the sport.  Both Hanson and Trautman talked about the fact that some sports had a much larger fan presence than did others.

“I would say the sport with the most fans is football with basketball coming in second. I think a lot of fans attend these sports because of the space that the sport is played,” Hanson said. “Football has a field and basketball has a court where fans can gather around and see all of the action in one spot, where sports like cross country or track are spread out, which makes it more difficult for the fans.”

“I feel like our student sections have been electric and exciting,” Johnson said. “When we talk to recruits about what kind of atmosphere do they want to be apart of, there is no better place to play a game than at Bethel.”

The success can be credited to the strong social media presence that Bethel University Athletics, specifically Jared Johnson, has presented for the students.  The @BethelRoyals Twitter and Instagram post ‘Game Day’ pictures, informing the students about the possible theme for the game, and details on the game’s location, time and opponent.

“There is a sense of community in those theme nights; a sense of togetherness,” Johnson said. “Themes have been a great asset to our overall fan engagement. To see a packed Robertson Center or Royal Stadium, it’s pretty special.”

As social media has played a strong influence for the Bethel student sections to promote the games, at schools like St. Thomas, it may not be the same case.  For a school that some view as a power house university in the MIAC, besides the St. Thomas vs. St. Johns football game, the fan involvement for all of their varsity sports is poorly attended.

“UST has done a poor job of promoting school spirit, which is resulting in a genuine lack of passion for athletics,” Bannigan said. “It doesn’t help that we are good and for people who aren’t huge sports fans, they aren’t motivated to go knowing that we will probably beat the other team, the only reason we bring a crowd for Tommie-Johnnie is because it is a big social event.”

Although the MIAC student sections do not have the enrollment and Division I student section antics like ‘Jump Around’ (Wisconsin), The ‘Cameron Crazies’ (Duke) and the Tomahawk Chant (Florida State), attending games and participating in a student section still gives the athletes the excitement and joy of playing.

“There is nothing that amps you up more than having a full gym in a high pressure game with everyone cheering for you,” said Trautman. “That will easily be one of the most memorable moments of my collegiate career.”

0 comments on “Will the best student section please stand up?”