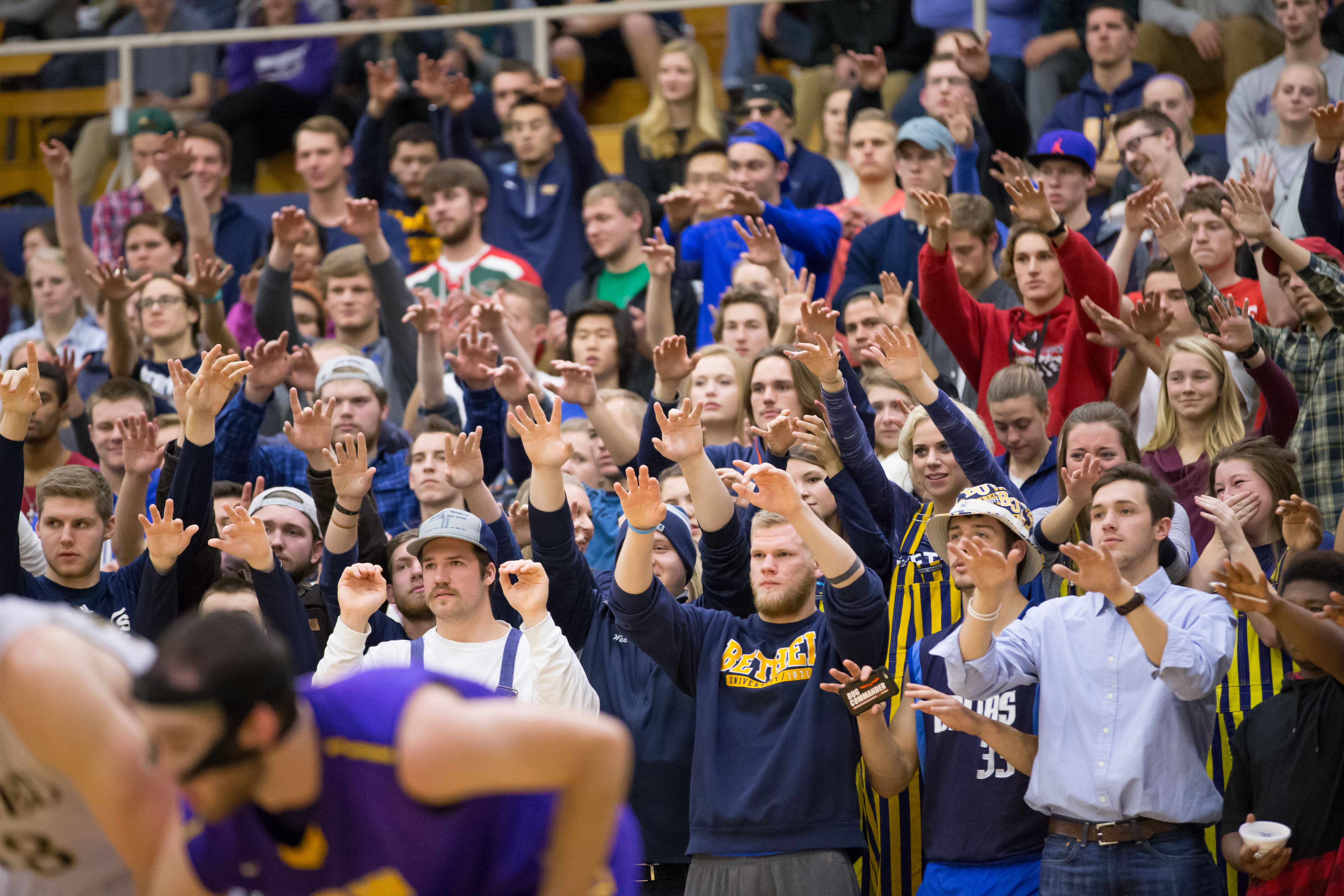 Exploring the rivalries between MIAC schools.

Trent Anderson, former Bethel quarterback, lights up when he recalls his mud-stained jersey and the shivering blue and gold fans from the victory that occurred almost 30 years ago. Water filtered from the bottom of his helmet to the bare skin on his goosebumped back, and skywater tears catapulted from the tips of his soon-to-be-wife’s sopping pompoms.

Of all people, he understands that gameday energy creeps to electrifying when St. Thomas is the opponent.

For the Vikings, it’s the Packers. For the Red Sox, it’s the Yankees. For North Carolina, it’s Duke.

Everybody loves playing teams they hate.

There’s just something about playing a rival that causes indifferent fans to paint their faces, stay-at-home mothers to yell at the referees and diehards to completely lose their minds (and their voices).

“St. Thomas was always the team that would start fighting amongst themselves. When we learned how to get under their skin, it was an amazing beat-down.” – Trent Anderson

Anderson, the women’s golf coach, former assistant football coach and renown athlete in both football and baseball for the Royals as a 1991 graduate, remembers when St. Thomas tiptoed under the radar as a much smaller powerhouse. Throughout his athletic career at Bethel, St. John’s was unbeatable in football (literally — Bethel never beat them in all four years of Anderson’s time here), so defeating St. Thomas seemed a more reasonable task. That’s when the Bethel-St. Thomas rivalry surfaced.

“St. Thomas was always the team that would start fighting amongst themselves,” said Anderson. “When we learned how to get under their skin, it was an amazing beat-down.”

Hockey was a different story in the early 90’s. St. Thomas didn’t get Royal hockey fans going, but St. John’s sure did. The heated rivalry once provoked Bethel to a bench-clearing brawl in the middle of a game, Anderson recalled with a chuckle. His roommate and good friend were right in the middle of the madness.

“It was unbelievable,” said Anderson, laughing, as he looked at a framed picture of his roommate and shook his head.

Jared Johnson, assistant Athletic Director, explains the one-sided rivalry that has developed between Bethel and St. Thomas. The biggest reason is because St. Thomas seems to consistently camp out at the top of every sport.

“Whenever someone has a target on their back, they are going to be a rival. We’ve had really competitive matchups this past decade. It feels like we’re always gunning for them in every sport,” Johnson said.

Trevor Hall, senior guard for the men’s basketball team, experienced this rivalry long before he started playing for Bethel. His brother played basketball for the Royals and graduated in 2013.

“I try to keep the emotion at a stable level, because in the past we’ve had tempers flare. Keeping a level head is important.” – Trevor Hall, Bethel senior

Hall and his senior teammates have lost to St. Thomas in the playoffs three years in a row. The Royals barely lost grip of the title his sophomore year, when the Royal’s in-and-out three point shot almost beat the buzzer to put the Tommies under.

“I try to keep the emotion at a stable level, because in the past we’ve had tempers flare,” Hall said. “Keeping a level head is important.”

Johnson used to compare a win against St. Thomas to the excitement of a high school state championship victory. Now that Bethel has grown to be more competitive, a victory against St. Thomas is just a sign that something bigger is on the horizon.

Anderson agrees. Defeating St. Thomas should be another obstacle to get past, not an entire season’s goal. He recollects the philosophy he adopted from his favorite coach, Phil Janaro. He once pulled Anderson into his cramped coach’s office and asked him what he thought it would take to walk away with a victory. Anderson stumbled through his answer, and Janaro interrupted.

He cussed and slammed his fist against the desk. “No! Wrong. It just takes the will to win.”

“His name should go down in history,” said Anderson. “In one year he singlehandedly transformed the football program.”

When Anderson watches Bethel play St. Thomas today, he watches young men who are twice the size of the majority of his team in 1990 because they spend so much time in the weight room. He watches smart players who are students of the game — dedicating hours to film each week —  as opposed to his former team which barely watched any film due to the video quality.

He watches an ever-increasing rivalry, launched from his football team’s will to win during a rainy, muddy game in 1990. It’s an athletic program that continues to grow and impress in every sport — enough to earn the respect its greatest rival, St. Thomas.

Maybe someday, the Royals will earn their hatred.

0 comments on “Why we hate St.Thomas”