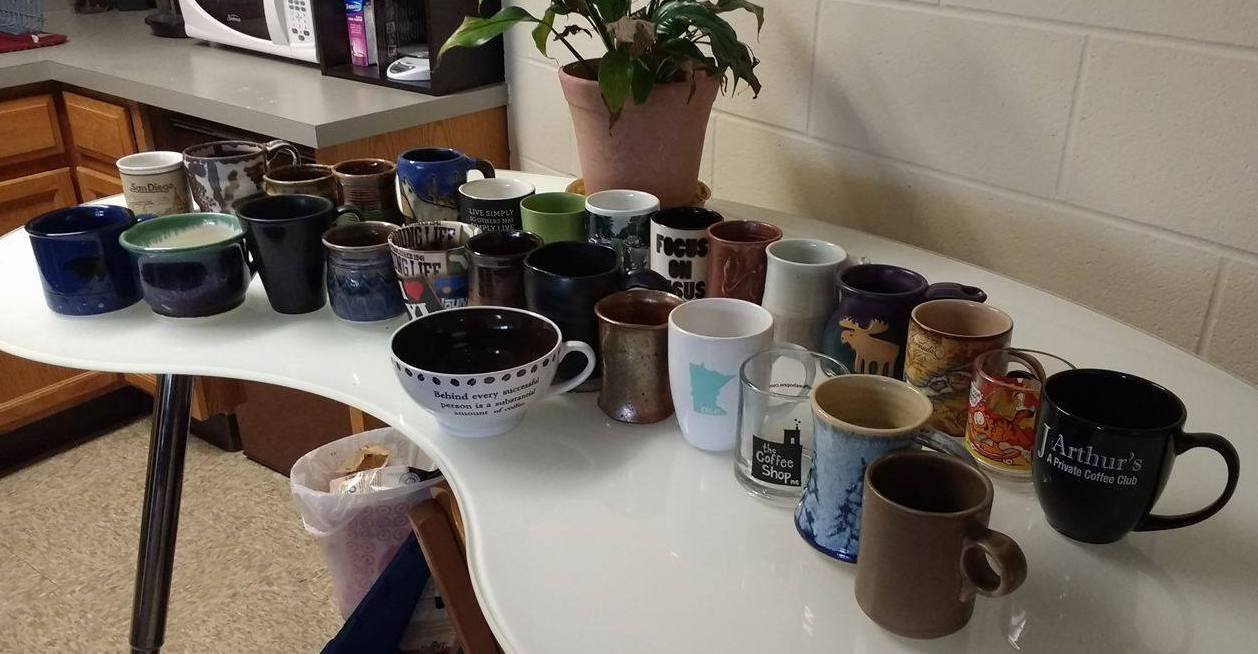 Bethel students and faculty thrift to make the world a better place.

Limberg gathers all of his thrifted clothing to show that most of his clothing is second-hand. “I think it is fun to enter into places and find something that has a story already but you give a new story,” Limberg said. Photo by Kellie Lawless.

Trevor Limberg was 7 years old when he first stepped foot into a thrift store. He wandered through the isles of Savers with his mom, digging through cluttered shelves and dusty racks until he found the perfect toy at a perfect price: a Darth Maul lightsaber for two dollars. Even though he hadn’t yet seen Star Wars, he knew he had found a treasure in the midst of clutter.

In high school, Limberg thrifted mostly for ugly Christmas sweaters. He started visiting thrift stores on a regular basis when he started at Bethel.

“When I came to college, thrifting became more of an outing with friends, a way to get new clothes, and to just have fun,” Limberg explains.

Through countless thrifting excursions, he has obtained over 45 mugs, 320 movies, and the majority of his clothing. He’s even written a “Guide to Thrifting,” where he has outlined things like helpful tips to follow when thrifting and his go-to thrift stores.

“I love thrifting because most thrift stores are placed in an area where the culture is a lot different than Bethel’s,” Limberg said. “When you walk into a store, it kind of shocks you. You think, ‘I could be the only white person or the only person who speaks English in this place right now’ and that gave me a reason to go.”

For Limberg, interacting with cultures, ethnic backgrounds and economic statuses that are different than his own is extremely beneficial in understanding who the kingdom of God can be.

A few years ago, adjunct professor Brianna Millet began to think critically about the way she was living her life. She examined whether her life was cultivated the idea of shalom and reflecting the kingdom of God. One of the areas of her life that she examined was her shopping habits.

“I started asking myself the question, ‘Does my shopping reflect shalom?’ and it didn’t in any way shape or form,” Millet said. “My shopping was super me-focused, and (focused on) this idea of retail therapy. I didn’t pay any attention to who made the clothes, from where, or what the environment was like in which it was made. It was all for the satisfaction of my own self.”

In 2015, a sustainable fashion documentary, The True Cost, said that Americans throw away 82 pounds of textiles each year– much of which can be reused. Most of the textiles are not biodegradable and will release harmful gases into the environment during the 200 year decaying period. Most textiles are manufactured in an oppressive environment, where workers are paid little to nothing and often suffer lasting effects of dye that was used or bare the scars from harmful machinery, according to the documentary.

“If we believe in the renewal and the restoration of all things when Christ comes again, we have to see that this idea started in Genesis,” Millet said. “(It’s) the idea of Shalom, caring for all things, human beings and non-human beings alike. I think that if we as Christians are not aware of reducing our carbon footprint… what does it mean then to bring Shalom for you? What does it mean to have dominion?”

Since realizing the effect her carbon footprint has on creation, Millet has slowly changed how and where she shops. Instead of migrating to name brand clothing stores, she shops at thrift shops.

“I found this sick Patagonia jacket found while thrifting,” she said, running a hand over the jacket folded in her lap. “I had wanted one for a long time, but I am super intentional where I buy my clothes. Even though it is a total first world excitement, I found the jacket at a super great price, plus it was at the thrift store, so I consider it a win-win.”

Many Bethel students have also joined in on the thrifting trend, finding items that are cheap and unique.

Junior missional ministries major, Michaela Silvis, loves to thrift because it is a good way to spend time with friends.

“When I was a senior in high school, a thrift store in my hometown had just opened, so my best friend and I would go every week after school and try on clothes and find weird things together,” Silvis said. “She got her prom dress for fifteen dollars in a thrift shop.”

As a double major and double minor, Limberg doesn’t have a lot of free time. Already stretched thin between classes, Student Activities, and his role as a Welcome Week committee head, he doesn’t have a lot of time for anything else. But in the time he did have, he volunteered at a thrift store.

Over J-term, Limberg, along with his entire class, volunteered at God’s Closet, a thrift store in West St. Paul where everything is free to those in need.

“I almost find more joy in donating stuff there rather than any other thrift store because I am not getting anything back for my donation except knowing that someone will have clothes tomorrow.”

Limberg noted that donations are extremely important because it keeps circulation going within thrift shops in the area.

“Donations also help with sponsoring the organizations that the thrift store is partnered with which is cool because most if not all thrift stores will ask you when you check out if you want to donate to help certain organizations that they are partnered with,” Limberg said. Though he thrifts on a regular basis, he donates just as much. “I think it is fun to enter into places and find something that has a story already. When you buy it, you give it a new story.”

0 comments on “The reason for thrifting”