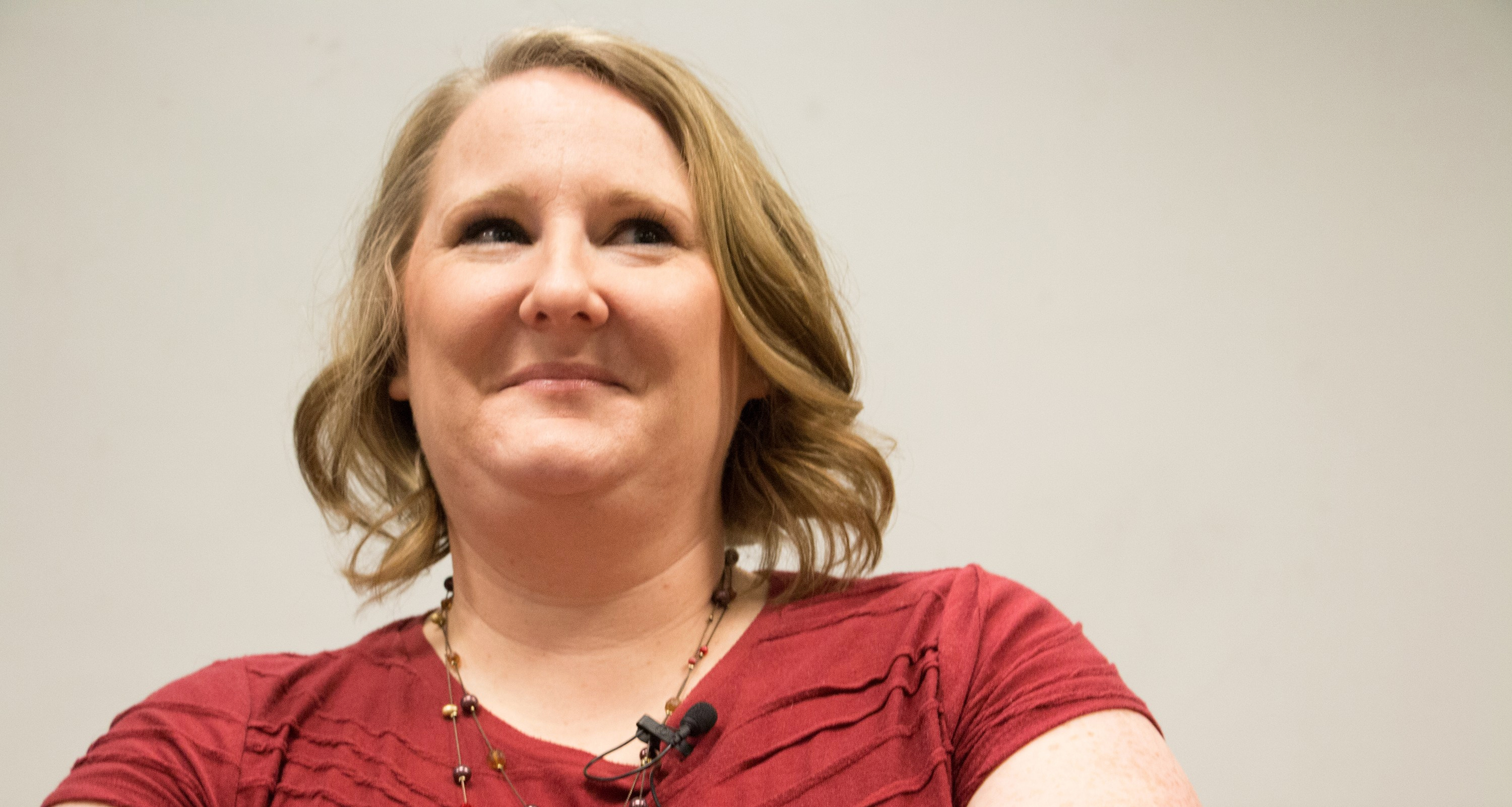 Jackie Lea Sommers graduated from the University of Northwestern-St. Paul with a degree in creative writing. After working in the UNW Admissions office on the weekdays, she would spend her evenings and weekends writing what would become her debut novel, Truest. Her novel deals with issues of faith and mental illness, something that Sommers struggled with for over 20 years until she found treatment.

Sommers lives in Minneapolis and is working on her second novel that is expected to be published in fall 2018. She visited Bethel University’s ENW360 Topics: Art and Culture Reporting class to tell stories about her struggle with OCD, her journey to publishing her first novel, and how they are closely intertwined.

Look for more about Sommers on a future episode of Witty Ranter, The Clarion’s podcast. But for now, read and listen to the best of what she said during her interview:

I can’t tell my story without talking about obsessive compulsive disorder. I had OCD starting at age 7, was not diagnosed until my early 20s and was not treated until my late 20s.

There’s actually a fear of being treated because you think, ‘How much of my personality disappears if I treat this disorder?’

What OCD does is it gives you an intrusive, unwanted thought that causes such intense anxiety that it ratchets up like a kettle blaring in your head and you will do anything to alleviate that anxiety. And that looks different for different people. For me it was a lot of seeking reassurance and a lot of confession.

The refrain growing up was always, “Jackie, you think too much.”

When I was a teenager I had undiagnosed obsessive compulsive disorder, I was this creative writer in this huge romantic streak, and I think that those two parts of my identity meant that I was thinking through things at a level that a lot of my peers weren’t to yet.

I didn’t want to only read novels about prom. I wanted to read novels that would show me that there were other teenagers out there who were thinking these totally weird, deep, existential thoughts. I felt completely alone. So I wish that I had been able to encounter characters like that in more books when I was a teenager.

I am loving the wide variety of books that is available now that I didn’t feel like I had enough access to when I was a teenager.

I told stories before I knew how to write.

I’ve always wanted to do something with writing and literature. I’ve always had that interest. But I did have a time after my undergrad where I didn’t write for three years and yet I knew during that time, I would. I was just so exhausted from my senior project, my undergrad, plus I needed to gain some life experience.

You don’t know how to write a novel until you’ve written one. You learn and survive through the first book, and then you get this badge of honor like, ‘Hey, you made it. Do another one and that one will actually be good.’

The people who got published were the people who persevered. I have friends who are more talented than I am. But some people are perfectionists and can’t get themselves to write a crummy first draft. That’s the difference.

Writing is such a beautiful gift of God. As writers, you get to be a little creator. You get to model what God has done in the beginning as a creator and you get to create. And that’s such a cool thing, and also a big responsibility.

Truest drops a few F-bombs, which to Christians is like the unforgivable sin or something, and teenagers drink alcohol in my book so apparently I am a sinner … which is true.

I have had some incredible reviews from people who hate religion and do not love God or believe in God. Some people said in their reviews, ‘I would never have picked up this book if I had any inkling that there was anything to do with religion in it. And I did read it, and I loved it, and it made me think.’ And I think, that’s what I want to do. That’s what I want my books to do, and they’re doing that.

When it has the ability to be treated and to be able to find that kind of freedom, that is what someone should go after. I am just as creative as I ever was –that’s a part of who I am, that’s a part of my identity – but my OCD kept me from being productive with it. Instead of moving forward, I was going in circles.

I’m so happy that after having been treated in 2008, I’m more creative. I’m more myself. I’m more productive.

Out of my 35 years, I have this experience of nine years of freedom and I’m kind of high on that, so I’m kind of like “Come at me.”