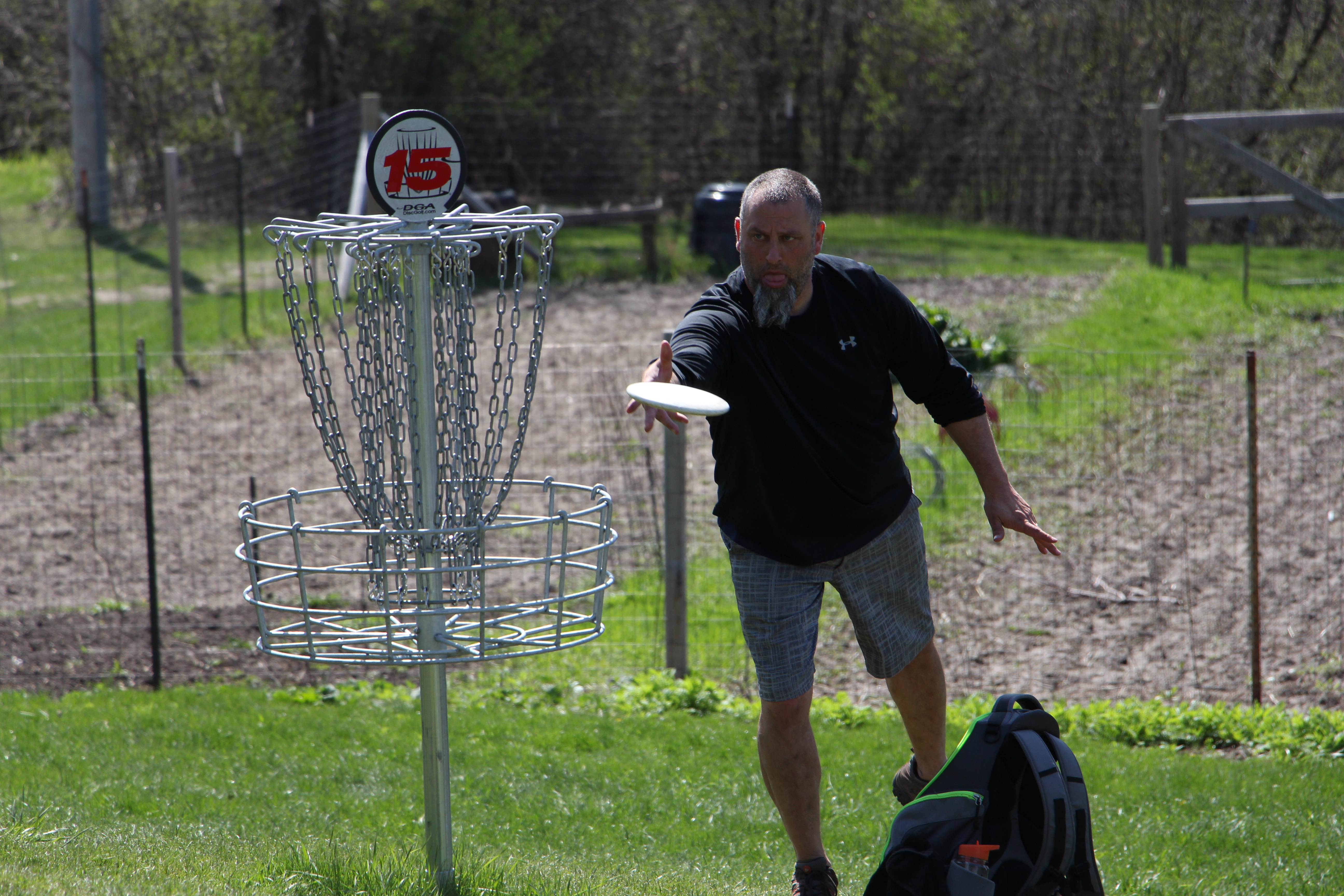 Professional disc golfer Chris Porter approaches the tee pad. He furrows his brow as he inspects the concrete surface through his dark-rimmed glasses. Too much sand. He hastily reaches for his straw broom and begins to sweep away the competition-or the dirt they left on the tee pad that is. Excess sand can lead to slipping during the final step of the throw, and Porter will not take that chance while competing in Bethel University’s first PDGA sanctioned disc golf tournament.

Theology professor Jim Beilby, alongside manager of grounds Josh Gerth, had proposed plans for the expansion of Bethel’s disc golf course since the initial 9 holes were installed in 2005. However, the plan did not gain any traction until Bethel Student Government (BSG) gained interest and funded most of the expenses. Bethel’s course became a complete 18 hole Frisbee golf course during the summer of 2016.

Professional disc golfer Cale Leiviska played this course for the first time in the fall of 2016.

“I was three holes in and I was already just in love with the course,” Leiviska said. Leiviska has played Frisbee golf since he attended college at Iowa State University and is now ranked sixth in the world according to PDGA.com. Today, Leiviska runs his own Frisbee golf company called Airborn. When Leiviska is not managing his company or playing in tournaments, he is running them.

“I really wanted to get this course involved with our tour,” Leiviska said. “I knew everyone was excited to play a tournament here, so we luckily got a spring date to work.”

The tournament, called “The Earth Day Celebration,” donated proceeds from disc sales to the University of Minnesota’s bee research lab to help combat the honey bee’s recent decline in numbers.

However, the heart behind the event did not correlate to lovely scores. According to Beilby, players reported having a difficult time achieving scores they wanted.

“I didn’t play well, but I was able to do okay cause I was playing Grandmasters,” Beilby said. “So since I decided to play with people who are old like me, I still did alright.”

Additionally, Beilby advises a brand new disc golf club for Bethel students. He hopes to expand the club in the fall to organize leagues and host tournaments. Most importantly, Beilby stresses the need for future freshmen interest in Frisbee golf.

In the past, Beilby has observed that Bethel students do not pick up frisbee golf as a hobby until their junior year. By the time students are seniors, they are not able to devote their time to lead a club.

“The trick is, we need to get something started that would pull on some people who aren’t seniors,” Beilby said.

Junior Nick Johnson plans to be involved with Bethel’s frisbee golf club next year. He was unable to compete in the tournament, however he was still excited about the possibility of  future Bethel tournaments.

“There are a lot of good courses around, and this tournament was a national qualifier, so it’s giving people a good name about Bethel,” Johnson said.

After sweeping the tee with his broom, Porter reaches into his bag of discs to select the perfect one for the last hole of the first round. With a quick, violent rip, he hurls the disc, commanding it as it flies. It initially tackles some branches, but after a few more tries the disc lands softly in the basket.

“Thanks for cleaning up the tee boxes!” one of the other competitors says as they all deliver high fives. His counterparts leave for their lunch break, but Porter jokes about different lunch plans. As he takes a swig of his chocolate milk he says, “I’m going fishing…for the disc I lost at hole seven!”

2 comments on “Building a future for disc golf”