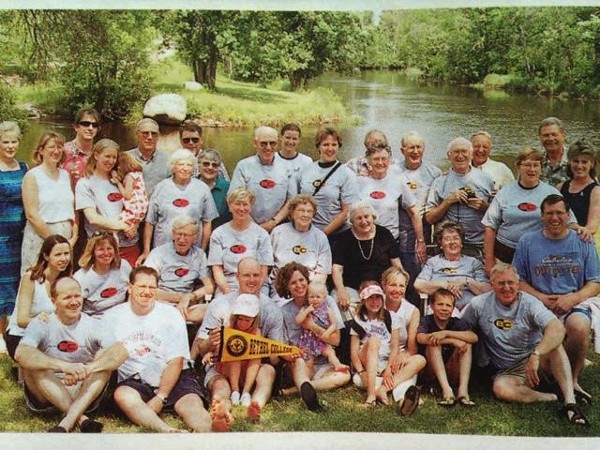 One student takes on the unquie role of the family’s 30th member to attend Bethel.

Emma Forsline was getting impatient. The toe of her white sneakers tickled the blades of grass while her aunts and uncles corralled everyone together for a picture. To a four-year old,  it seemed like was taking forever. Her fingers swatted away a pesky fly that landed on the rim of her white baseball cap, embroidered with  “Bethel College” on the front when her dad scooped her up from behind, carrying her over to join the rest of the family. Everyone huddled together, wearing the same light grey shirt with the logo for Bethel College stamped on the front. Just before the picture was taken, Emma’s dad handed her a yellow banner and the shutter snapped, just as Emma looked down to admire it.

Even though Emma didn’t know it at the time, she would be the 30th person in her family to attend Bethel University. Emma, now a sophomore elementary education major, is proud to continue her family’s unique legacy. Growing up, Emma listened to her relatives tell stories about their time at Bethel and tagged along with her parents to alumni events throughout her childhood. When it was time to pick  where she wanted to go to college, it was an easy choice.

“Bethel was always in the back of my mind,” said Forsline. “My dad and I came up for a football game when I was a freshman in high school and that was the moment when I thought, yeah I can really see myself here.”

The Forsline’s rich family history began with Marie Forsline. Marie, the oldest of 10, left her cozy home at the Forsline dairy farm and enrolled at Bethel University- then Bethel Junior College- in 1942. All of Marie’s siblings followed her example.

“Being from a family of 10, my parents couldn’t afford to send us anywhere,” said Sharon. “We had to work our way through college.”

Every spare moment Sharon had, she would work at the Roseville bakery, making a little extra cash to put herself through school. Although there were dorms in place when Severson attended Bethel,  her parents couldn’t afford to have her stay there. That didn’t stop her, however, from getting involved in the Bethel community.

“We were all so penniless!” said Sharon. “We didn’t have any money, but we had so much fun.”

During her time at Bethel, Sharon found 10 girls who she knew would be lifelong friends with. They called themselves the Bethel Broads Bunch – The BBB girls for short- and they did everything together.

Fifty years later, the BBB girls still get together quarterly and spend the day at Bethel going to Chapel and getting lunch together.

“We like to pretend that we are still students at Bethel,” said Sharon. “We have just as much fun now in our seventies as we did in our teens.”

When Emma moved into Bethel University, she hoped she would make lifelong friends just like her great-aunt did. Some of the girls that she considers her best friends lived with her on Bodien third floor during her freshman year at Bethel.

Just a couple doors down from Emma’s was room B307, where another family legacy was just beginning. Jasmine Printy, sophomore nursing major, already knew where she wanted to live for her first year at Bethel: third floor in the room directly across the stairwell. It was where her mom, Sara Printy, lived. Since she was a PSEO student, however, there were no guarantees that she would be placed in that particular room let alone in Bodien.

By the time that Jasmine moved in early for soccer preseason, she knew that she was in Bodien but didn’t know what room she was in until she climbed up the stairs to the third floor of Bodien with her parents in tow.

Her mom pointed down the hall at a door across the stairwell.

“Mom, they put me in your old room!” Jasmine said.

“It was really weird,” reflected Jasmine. “The idea of living in the exact same room she did by chance took a while to get used to.”

Sara Printy and her freshman roommate, Jeanny Douglas, would occasionally daydream together about about having their daughters become friends and go to school together. They would always laugh it off, not thinking anymore of it, until Hannah Douglas, Jeanny’s daughter, committed to Bethel and chose to live on the 3rd floor of Bodien, only a couple doors down from Jasmine.

Hannah originally didn’t want to come to Bethel. Her parents had come as well as many aunts and uncles. They all had stories about their time at Bethel and suggestions to what traditions she should participate in like J-term broomball. But Hannah didn’t want Bethel; she wanted to be different.

In January of her senior year, drove nine hours to look at Bethel with her parents because she had toured other schools but had not found the right fit. Bethel was the last school on her list.

“At the end of the day, I felt like I was at peace,” said Hannah. “I felt like the Lord was calling me here and I followed the call.”

When picking a residence hall to live in, she hesitated before choosing the third floor of Bodien. It was where her mom lived.

In the end, Hannah’s mom won her over with stories about her freshman year on the third floor of Bodien and, seeing how much her mom loved it, wanted to continue the tradition.

During the freshman picnic, Jeanny Douglas and Sara Printy hugged and chatted excitedly about how not only were their daughters both going to Bethel but living on a same floor. Jasmine and Hannah smiled at each other, knowing that the pressure was on to become friends but they didn’t mind.

“Our mom’s were really excited that we became quick friends,” said Jasmine Printy. “It was only a matter of time, though, since we were both nursing majors and lived on the same floor.”

After studying for exams, Hannah and Jasmine would curl up with a bowl of popcorn between them on Jasmine’s couch and watch Dr. Quinn Medicine Woman or Call of the Midwife together.

“We are both huge medical nerds, so it was really fun having someone else who shared that,” said Jasmine.

When Hannah was a freshman, she led her mom back into the nursing department, pointing out the simulation labs, hands on equipment, and the glass encased study room in the back of the department where she would study for tests. To Jeanny, everything was completely new. The department has grown tremendously since she was a student.

“It’s really fun to talk to my mom about what we are learning and doing in class,” said Hannah. “Especially since we have some of the same professors, like Dr. Shaw for anatomy.”

Jasmine and her dad both played soccer at Bethel University and have grown closer from the experience. Her entire family comes to see her games to cheer her on when they can, just like they did when she was in high school. Her dad is the loudest cheerer.

“My dad is happy that I get to have the college soccer experience because he made a lot of good memories playing for bethel and he enjoys seeing me have the same opportunity,” said Jasmine.

Before Emma’s freshman year came to an end, the girls on her floor pitched their hammocks by Lake Valentine to watch the sunset together before sticking tarp to the walls to create a slip-n-slide down the hallway of Bodien third floor. Before the night ended, they made their way down to the bungalow on the second floor to snuggle up and watch a movie together.

“It is one of my favorite memories from my time at Bethel,” said Forsline, “not just because of what we did but with all the incredible women I spent it with.”

Emma’s parents couldn’t be happier for their daughter.

“She’s getting a great education, from a Christian perspective, and is making a lot of fun memories. That’s what we remember, and hope for Emma,” says Emma’s dad, Kyle Forsline. “Most of all, we know that Emma will encounter God and grow in her love for her savior, Jesus Christ, as she attends Bethel.  It’s a place that fosters that growth.  She has already met incredible individuals and made great friendships-much like we did-with people who will help her in her spiritual walk and as she moves forward in life.”

Even though Emma is carrying her family’s legacy with her, she doesn’t feel pressured to travel down the same path that her 29 other relatives did.

“I don’t think I am necessarily living up to their legacy,” said Emma. “I am just continuing their legacy. I am just a part in this big story that started a long time ago. Each person has played a role in building that legacy and moving it forward.”

0 comments on “Carrying the Legacy”