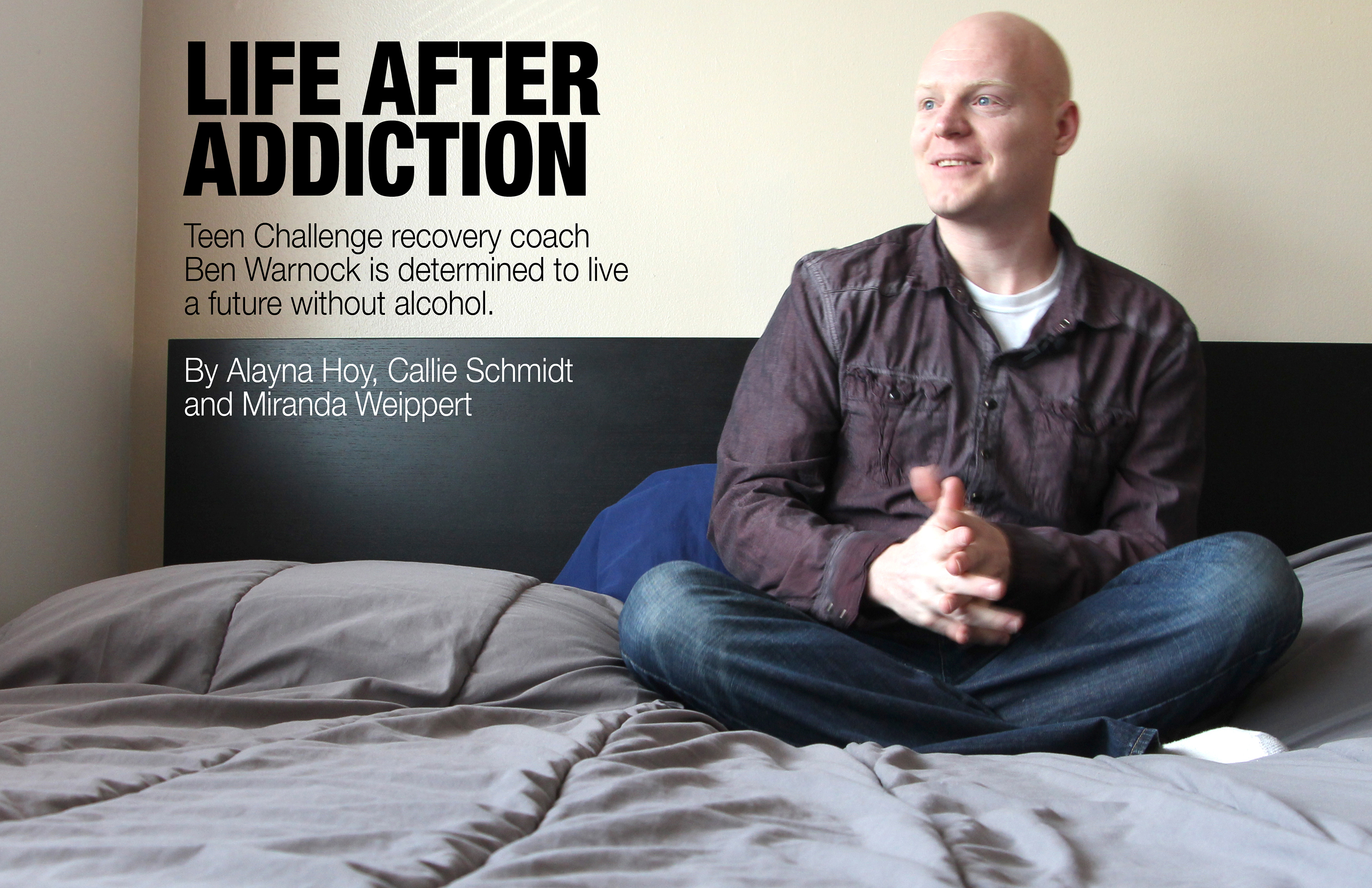 Today Warnock is a recovery coach at Minnesota Adult and Teen Challenge, helping men with addictions like his own find and claim a future without alcohol. To reach this point was not easy. It took years of heartbreak, relapse and prayer for Warnock to fathom a life free from alcohol.

Warnock first drank alcohol during his sophomore year at the University of Minnesota with his girlfriend at the time. It was not until the couple broke up that Warnock turned away from God and turned toward alcohol. Within a year, he was drinking a liter of vodka almost every day and beginning an eight-year-long journey of in-and-out of treatment and psych wards.

Warnock first landed at Minnesota Adult and Teen Challenge in November 2008 after receiving a drunken driving charge for chugging vodka straight for three straight days while driving through Minneapolis.

His first program treatment was 45 days. Warnock coped with his feelings of being trapped through music and communing with God.

After completing treatment, Warnock remained sober for 90 days. Then a friend he was in treatment with passed away. Though the loss may have been what initially sparked his relapse, Warnock admits that he just was not ready to be done drinking.

At one point, Warnock thought he could manage only drinking on the weekends or on his off-days. Soon it became clear that was no longer an option.

Two years ago, Warnock reached his lowest point in his struggle with alcoholism when he planned and nearly attempted to commit suicide by jumping off the Smith Avenue High Bridge in St. Paul. Warnock had attempted suicide before by taking two full bottles of extra strength Tylenol. He woke up the next morning begging to go to the hospital.

“That was one of the most miserable nights of my life.” Warnock said.

The night he set out to jump, Warnock realized committing suicide would mean denying his love for his family. Warnock changed his mind and changed his life. He returned to Challenge and, this time, refused to return to alcohol. Months into his recovery, Warnock ran a half marathon underneath the bridge he planned to jump from.

This time in recovery, Warnock enrolled in a special program for graduates – a six month in-patient treatment. Once he completed it, Warnock joined Teen Challenges’ leadership program, a year-long ministry school.

Within a few months of ministry school Warnock got an internship with Teen Challenge’s choir. Where he got to work with the choir, train soloists and raise awareness about Teen Challenge.

Faith and prayer are central to Teen Challenge’s recovery programs. Carlson and Warnock bow their heads, close their eyes and clasp their hands in the second-floor prayer room at the facility in Minneapolis.

My favorite thing about working at Teen Challenge is watching God do work and I get to see it first-hand. – Ben Warnock

“Lord, I’m just grateful to be back here and to walk this out with you,” Carlson said. “I thank you for this opportunity to be in this house again and to really change this time.”

This is Carlson’s second attempt at recovery. This time the 25-year-old Stillwater, Minnesota native has been at Challenge for 6 months.

“I’m feeling good this time,” Carlson said, fidgeting in the brown leather sofa of the prayer room. “I’m not cheating. Last time, I was cheating. Faking it to make it for the courts.”

Since returning to Teen Challenge, Carlson has conquered his fear of singing in public, become a “client leader” within the program, led several prevention events at local institutions, such as Champlin High School, and has been accepted as a Teen Challenge intern.

“I love Ben,” Carlson said. “He inspired me to do solos…This guy can sing like an angel. He didn’t even have to say his testimony, when he sings I’m crying.”

“My favorite thing about working at Teen Challenge is watching God do work and I get to see it first-hand,” Warnock said.

Coworker, Ronnie Williams, saw Warnock grow from client to recovery coach. Williams entered Challenge in 2006 as a client and graduated from the program in October of 2007. He has worked at Challenge since 2009.

“I’ve had many, many jobs in my life, but coming here is one of the better ones I have ever had,” Williams said. “I just loved what it did for me and thought I had an opportunity to give back.”

Since recovering from addiction, Williams recommitted to his Christian faith and became an ordained pastor. He attributes his spiritual growth to the principles the program installed in him. Williams is now the pastor of New Vine Ministries church. One of his favorite memories of Warnock is witnessing his joy in worship when he interned with the choir.

“It was so refreshing and enlightening to see him worship and sing with that smile that was genuine,” Williams said. “His worship is what invited me into his heart.”

Not only Minnesota Adult and Teen Challenge provided Warnock with employment opportunities, but it’s also been the place where he found his fiance Stephanie Jensen.

Jensen, although never an alcoholic, is also a recovery coach at Teen Challenge.

“We both write music,” Warnock said. “And I would love to record an album.”

At this point in Warnock’s life, he isn’t scared to leave Teen Challenge. He looks forward to the possibilities God has for his future.

“For the future, I will continue my work at Teen Challenge,” Warnock said. “Every day is a new adventure. Some days are real difficult, but the majority are fulfilling.”

0 comments on “Life after addiction”