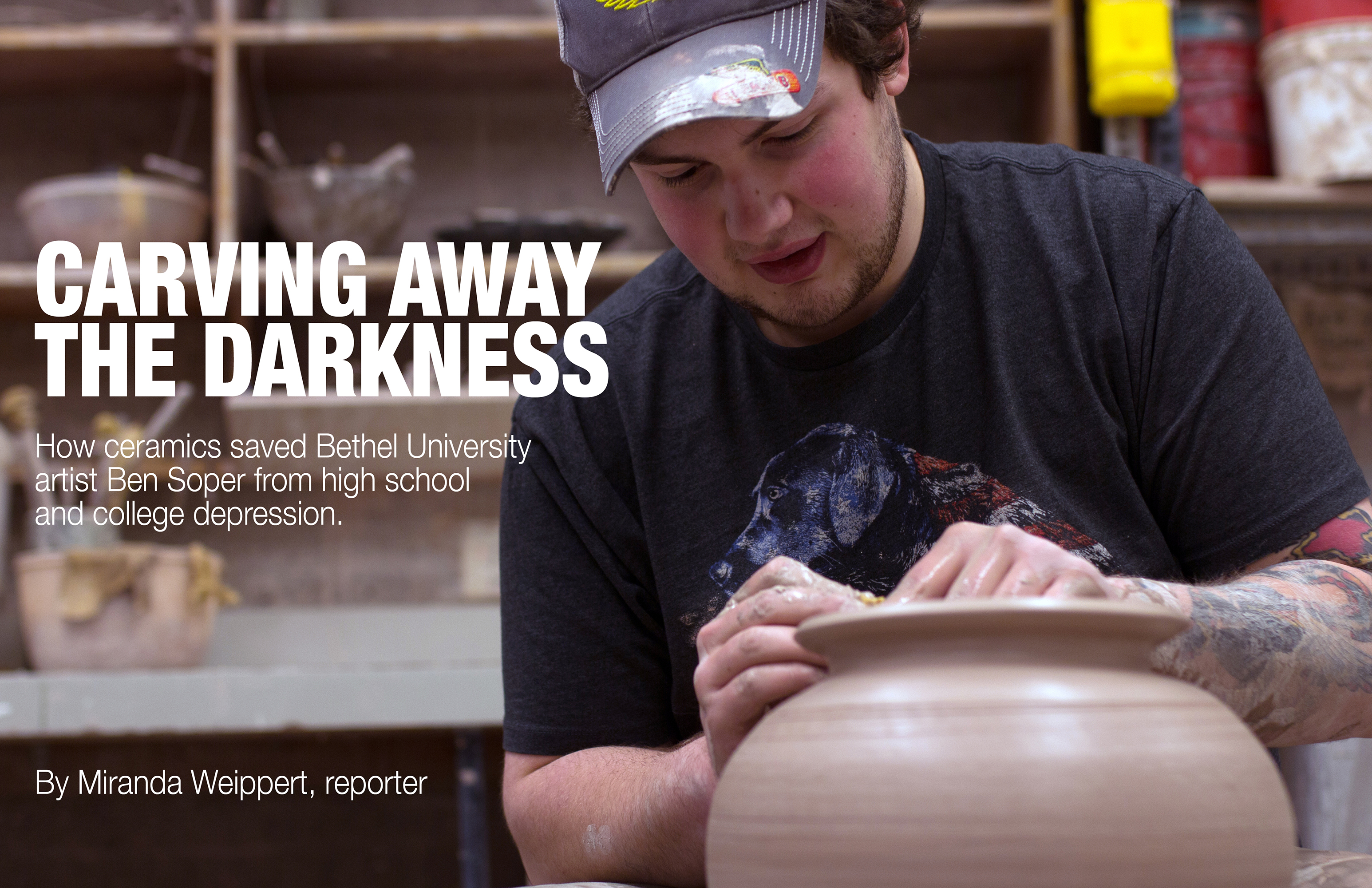 Bethel University sophomore Ben Soper sits on a four-legged stool hunched over the front of the wheel in the fluorescent lit pottery studio in the basement of the Clausen Center. The floors and walls covered with clay. The room filled with both unfinished and finished works of art.

Soper wears a camo hat, plaid shirt, crocs and black pants that will soon be caked in clay. At Bethel, most pottery students protect their clothes by wearing aprons and having a set of designated clothes to wear while they are working in the studio. However, he doesn’t have designated clothes and chooses to never wear an apron.

Soper is the type of student who won’t study for art history or do homework for 21st century math, but will pull all-nighters every Monday in the ceramics studio to continue branching out and trying new things on the wheel. He’s the type of person who used to care too much about what people thought of him, which was what led him down a dark path.

He grew up in a home of Baptist believers in the cities, always working with his hands and being out in the woods. He’s the middle child who says he has always been the creative brother. All three are outdoorsy, but his two brothers work at Menards and tease Soper about his art.

“Even though I tease him,” his older brother Aaron said, “he’s doing something he likes to do and for him to pursue that is awesome.”

Once during deer season, Aaron shot two deer, his younger brother shot one, while Soper hadn’t shot anything. So he ended up shooting a rabbit just to get onto the scoreboard.

Although, Soper enjoys fishing, hunting and woodworking, he always found himself captivated by the arts, but didn’t find ceramics until his senior year of high school during the toughest time of his depression.

“I don’t think there were any big events that happened that triggered it,” Soper said. “But sometimes I wish there were because than I would have more of an excuse.”

Due to not knowing how to cope or handle his depression, it spiraled fast and hard. He came to such a low point in his life that he attempted suicide – twice.

“Pottery is the one thing that can really pull me out of dark moments,” Soper said. “It really saved me.”

His depression began with the realization that even though he had many friends, he believed they didn’t really know who he was. He didn’t think anyone cared. He felt forgotten.

Once he got home from school he wanted no human contact, however found himself still hanging out with a certain group of friends. As his depression spiraled, he found himself thinking more negative thoughts such as ‘I’m not good enough at this or I don’t deserve this.’

I started to put a mask on. I was two completely different people at school and at home. – Ben Soper

He centered himself around other’s opinions while being in a constant nervous state. This made him not want to meet people because he worried about what they would think.

“I started to put a mask on,” Soper said. “I was two completely different people at school and at home.”

At school Soper was loud, friendly and involved. At home he was quiet, alone and distant.

Today, Soper focuses more on himself and how he can help people. Although, he still tries making a good impression, he stopped caring what other people thought.

His depression not only made school a challenge, but also made him question his faith.

Before his depression began he attended church weekly willingly and enjoyed going. He also read the Bible frequently.

After his depression began it wasn’t long until he began walking away from God.

“I had a lot of questions and doubts,” Soper said. “I still don’t understand why some things have happened to me, but I think it has all worked out for the best.”

Soper mainly came to Bethel because of his faith. He hoped the campus would bring him closer to God. It hasn’t yet, but that’s because he believes he could try harder than he does.

He knows that faith is a journey and sometimes a struggle. Recently Soper made pottery in front of a congregation because the pastor was doing a sermon on how God is the potter and humans are the clay. The message was powerful for him, fun and relatable to his own life.

The first class Soper registered for was ceramics even though his declared major was music education. At that point he thought ceramics wasn’t something he could do professionally.

It was then, when he met art professor Kirk Freeman. Freeman put Soper in touch with professional potters. Once he saw the work they were doing, it clicked that an artistic life was 100 percent possible.

During Soper’s spring semester freshman year he dropped all of his classes but one:  ceramics. Pottery was the only thing he could concentrate on and enjoy. He ended up dedicating six to eight hours a day in the studio as if it were his job.

Soper is very good. He’s realistic and just plain continues to work, he reminds me of myself and that’s why I appreciate him. – Kirk Freeman, art professor

Freeman doesn’t endorse him to always do this when things get tough, however, he knew he was going through a hard time. He believes people come to a certain point where one has to do what they have to do, to be able to start up again.

“Soper is very good,” Freeman said. “He’s realistic and just plain continues to work, he reminds me of myself and that’s why I appreciate him.”

Since competition is greater among young potters today, Freeman says Soper will have to continue learning, making the craft and have a day job to afford to build his business. Especially once he leaves Bethel. He will need to find different avenues of education, whether that be through internships with professional potters or graduate school.

“He has talent, but his initiative and drive will go further than talent in the long run,” Freeman said. “With his drive he can go as far as he wants.”

Soper’s dreams are big and he doesn’t question the amount of work he will have to do to achieve those dreams. He’s even come to the realization that he’ll have to have another job, other than the job he loves.

I’m not a man yet, but I’m working on it and if I could be anything close to him [Freeman] in my professional career, it would be a dream come true. – Ben Soper

“I’m not a man yet, but I’m working on it.” Soper said. “And if I could be anything close to him [Freeman] in my professional career, it would be a dream come true.”

Although drawn to very elegant and smooth forms, he continues to search for his style. The more he crafts, the more narrowed and focused his style will be. He’s in ceramics to make things he enjoys, not to make things others think are cool. For him, it’s therapeutic. It’s his kind of therapy.

The finishing touches on a set of pots Soper threw three days ago are complete. After, he grabs a bucket of water, a sponge, and a few slabs of clay. He starts by throwing one slab onto the center of the wheel. Slowly, the wheel begins to turn and in less than an hour he’s created three different sized pots.

0 comments on “Carving away the darkness”