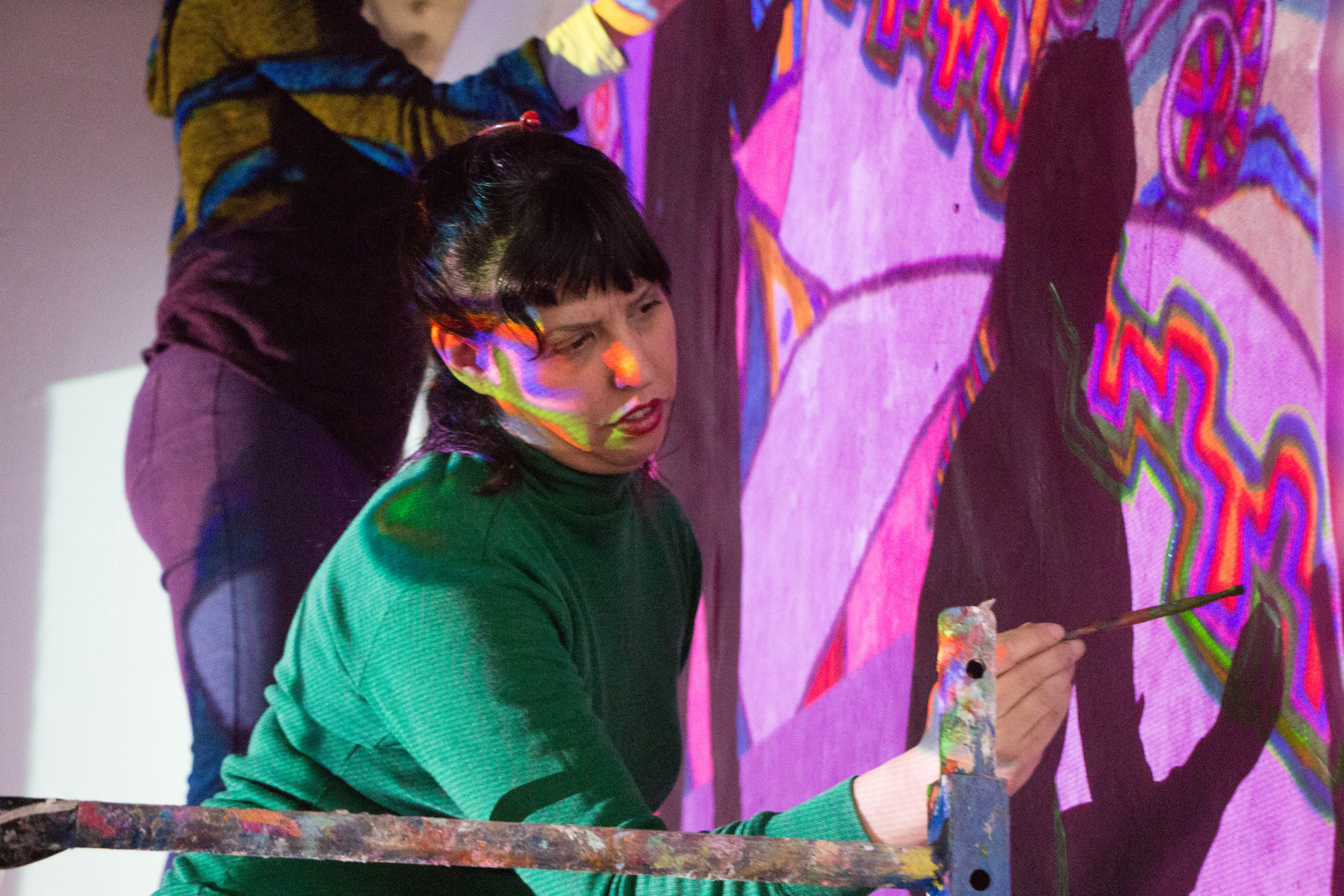 By Jamie Hudalla and Callie Schmidt

Muralist Greta McLain drives through Uptown Minneapolis in a boom lift, careful not to let it clip parked minivans or pedestrians. She goes against traffic on Lagoon Avenue and manages to park the tractor with a 15-foot neck in an alley during rush hour.

McLain makes the stressful trek twice a day so her team can finish a mural of a purple woman with hair made of flowers and birds. Sometimes the permits and power-lifts cause trouble. Every time her measurements are off. But it doesn’t matter because McLain gets to contribute to Minneapolis’ evolving mural scene, and she gets to do it with the help of the community.

“Not only are we diverse, but we are pulling people together in a positive public way,” McLain said. “We’re excited about our immigrant and refugee communities. … We are breaking out of the beige box that is our traditional Minnesota image.”

In 2013, photographer Mark Peterson decided to capture that image by photographing every mural in Minneapolis. He figured there were 150 tops. Peterson realized he’d underestimated the mission by 400 murals.

Peterson attributes the increasing diversity in Minneapolis to people immigrating from Latin America.

“The city is the richer for it,” Peterson said. “Not just more colorful, but more aware of the world beyond our city limits.”

Born and raised in South Minneapolis, McLain left those city limits to study muralism at University of California-Davis. She studied abroad in Mexico City, spending time traveling and working under muralists in Argentina and Chile.

She planned to stay in California after graduating, but her professor advised she bring her talents home.

“This is not your community,” her professor told her. “You are charged to take this skillset and ignite your own community.”

When McLain returned to Minneapolis, she brought elements of Hispanic culture and community with her. She along with other muralists gradually altered the city’s primarily white landscape. Decades ago, murals were only advertising signs and business names. Now, people identify the Twin Cities as diverse and progressive.

Murals become iconic visuals that stamp the area. Art and culture supports an area becoming a destination, more so than a bank or restaurant. –Joan Vorderbruggen, Director of Public Art for Hennepin Theatre Trust

Whether it’s a 60-feet tall Bob Dylan or two squirrels in a Pabst Blue Ribbon can, these images tell a story about the city. They don’t exist for museums or galleries. They thrive on a brick wall, eroded from wind, captured by the iPhones of pedestrians on their way to grab coffee.

According to Joan Vorderbruggen, Director of Public Art for Hennepin Theatre Trust, artists are the best conveyors of important changes in communities. More and more blank walls disappear and are replaced by reflective ones.

“Murals become iconic visuals that stamp the area,” Vorderbruggen said. “Art and culture supports an area becoming a destination, more so than a bank or restaurant.”

But blank walls don’t inspire everybody. Some businesses don’t realize how arts and culture can benefit them.

“If there’s something large and beautiful in a place where it hadn’t been before, people’s interests are piqued and they pay attention,” Vorderbruggen explains.

For the past four years she’s tried to bolster the city’s vibrancy by partnering artists with property owners. According to Vorderbruggen, Downtown Minneapolis is behind in the global mural trend.

Despite the slow momentum in Minneapolis, artist Lili Payne hasn’t noticed a dip in hiring since 2009. Since then, she’s stayed busy painting restaraunts, bedrooms, museum exhibits and more.

“That comes back to hand-done things, like artisan stuff. Letterers are always busy, and it’s the same thing with muralists,” Payne said.

Since Peterson shot the murals in 2013, he believes it’s possible that 100 more have popped up since then. However, ask someone to name a famous muralist and they might scratch their heads and mutter something about Diego Rivera. Most muralists don’t paint for critical acclaim or shoutouts in The New York Times.

For Payne, painting is strictly a paycheck.

“It’s a business and needs to be run that way. When you’re too concerned with your message then that gets lost,” Payne said. “If you’re so focused on whether you’re expressing the thing you need to, you miss out on just getting it done right.”

It’s not your average nine-to-five job, but for most muralists it’s their only source of income.

So In McLain’s case, they sometimes take on five murals at a time. In other cases — like the artists who painted Goldman Sach’s mural of Bob Dylan — they worked from 8 a.m. to midnight. The faster they work, the sooner they can hop on the next project.

“Every minute of good weather is money,” Vorderbruggen said.

McLain ignores the ticking clock. Her projects may take weeks, months even. But she doesn’t work alone – she incorporates the help of the community every step of the way. Everyone from elementary students to those who qualify for senior discounts are given a paint brush and a vision.

Five summers ago McLain partnered with South Minneapolis High School to create a 1,700-feet mural in the stairwell. Students used their summer vacation to help with the painting. They chose the theme “we the people.”

McLain paints murals through community process because she believes the end product is empowering for the people living there. Otherwise, she’s bored by herself in a studio.

“Whoever controls our visual spaces controls how we think,” McLain said. “So I’ve always thought about these big blank canvases that are walls and thought, ‘Wouldn’t it be amazing if the community got to control that visual space to tell their stories?’ ”

0 comments on “Walls that tell stories”