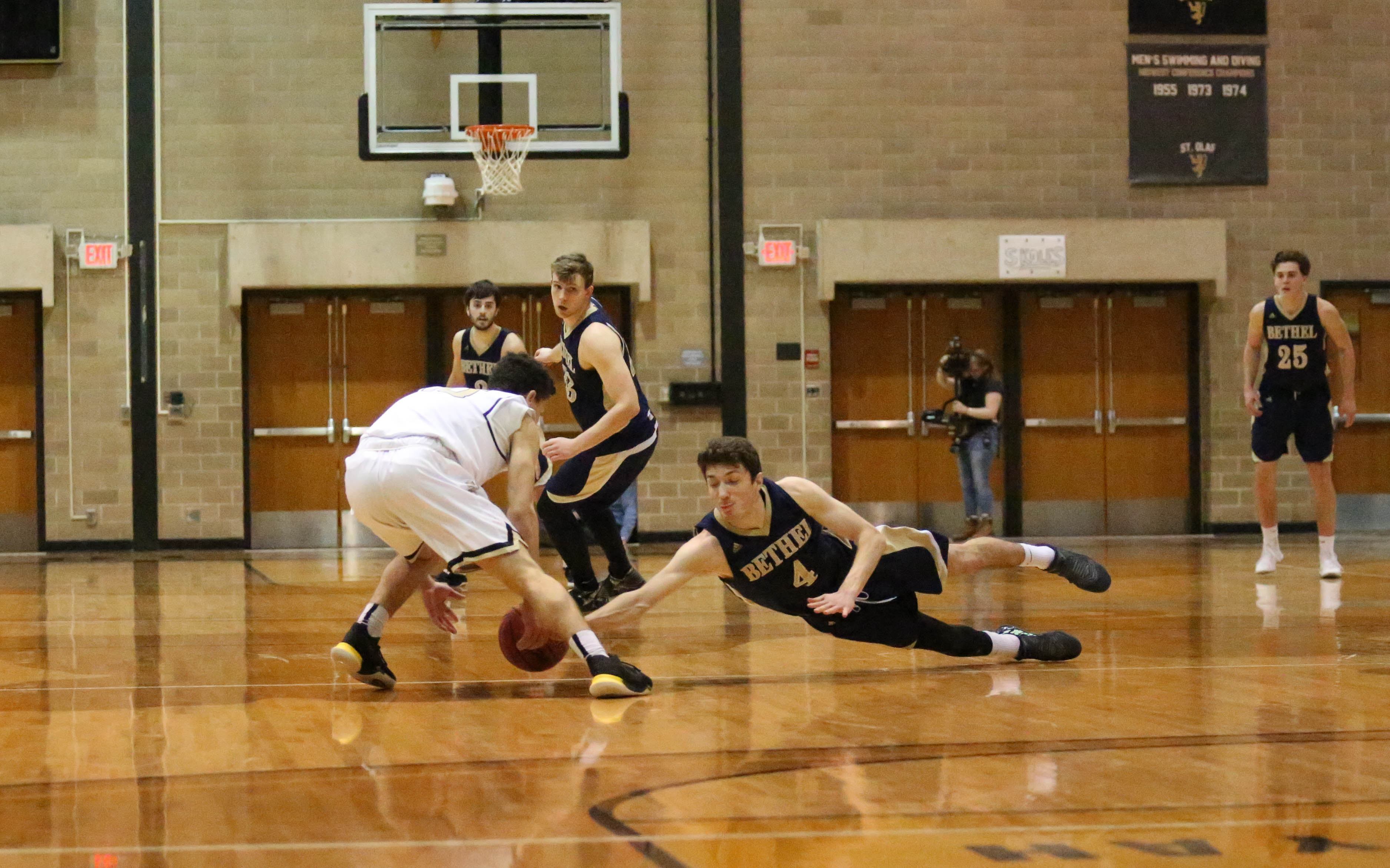 The Bethel men’s basketball team advanced to the MIAC playoff final in a 79-57 over St. Olaf.

The Bethel men’s basketball team punched its ticket to the MIAC championship game in thrilling fashion, defeating St. Olaf by a score of 79-57 on Friday night. The Royals knocked off the Oles for the first time this season after failing to do so both times in regular season play.

Bethel was paced by sophomore guard Jack Jenson, who tallied 17 points and seven rebounds. Junior Matt Ambriz added 15 points on five three-pointers and Derek Magnuson worked inside for his 14 points and eight rebounds. The Royals had four players in double figures and two more with eight points each, displaying great balance on the offensive end.

The game was tight for the first 25 minutes, with the game tied up at halftime by a score of 33-33. Then Matt Ambriz stepped in for two big treys to extend the Bethel lead from 10 to 16 and the Royals never looked back. Despite a comeback effort down the stretch, St. Olaf could not get back in reach and the Royals prevailed in a well-executed 20-point victory at the Skoglund Center in Northfield.

“I thought we followed our game plan to perfection in terms of being sound and connected defensively,” Bethel head coach Doug Novak said after the win. “That’s a really good team we played tonight, and I thought we had a really good presence inside, playing inside-out basketball.”

The Royals were 9 of 19 from beyond the arc, good for 47 percent on the game. Conversely, the Oles shot just 6 for 26 on three-pointers, and just 38 percent from the field overall.

The emotions were running high for game-high scorer Jack Jenson, who sparked Bethel all game with nifty drives and passes in the lane. “I don’t even know how to explain it,” he said. “Coming in as the third seed, there wasn’t a lot of hope. But in the back of our heads we knew we could do it, and we’re playing our best basketball right now, so that’s all we can do.”

That brand of best basketball hopes to stay alive on Sunday, as the Royals host their second straight MIAC championship game in the Robertson Center. The Royals will face fourth-seeded Augsburg University, who defeated first-seeded Saint John’s in Collegeville on Friday night. Tipoff is scheduled for 2 p.m.