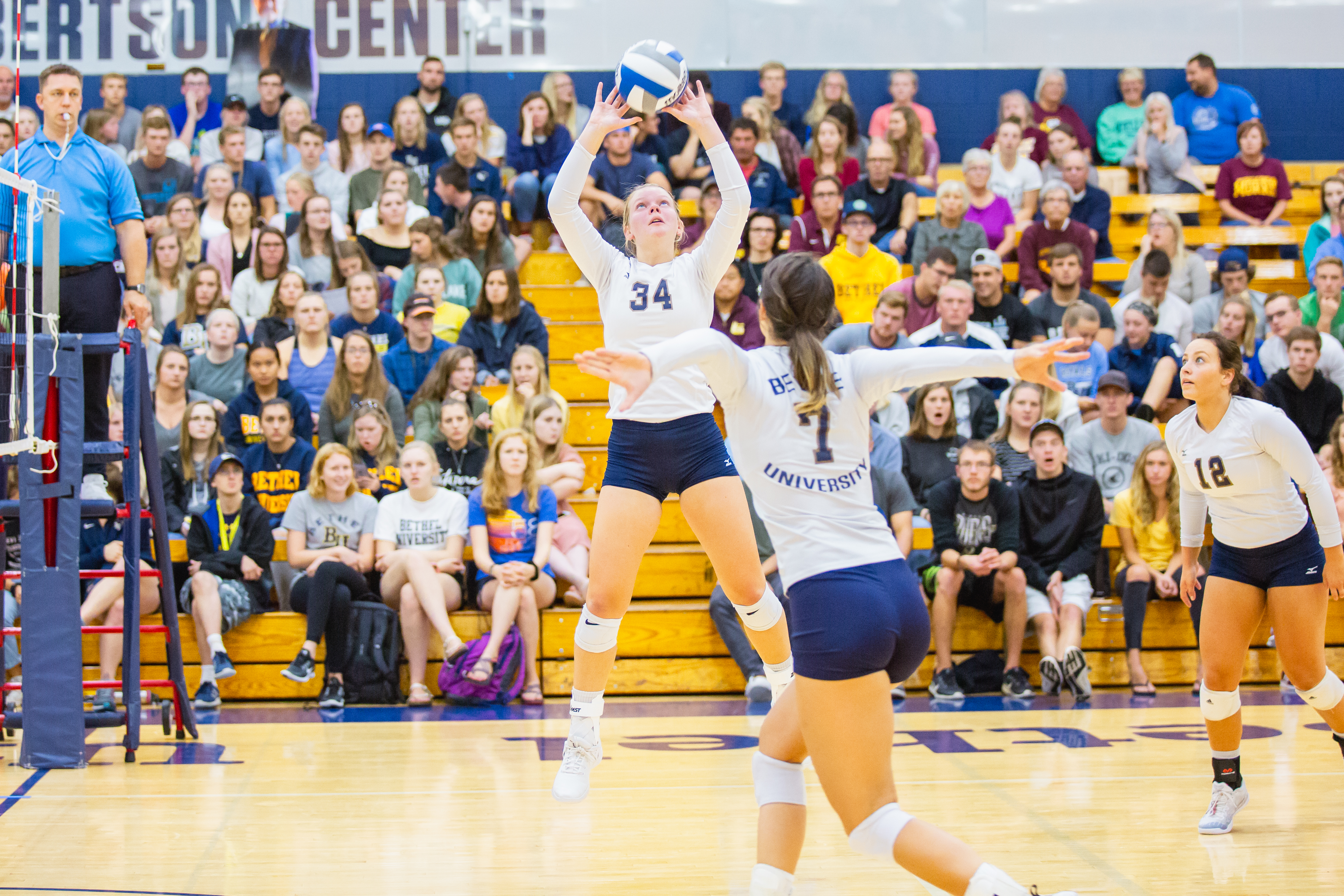 The Bethel University volleyball team (4-1) opened its home slate of games for the season Aug. 4 by defeating the University of Minnesota-Morris Cougars (3-2) in four sets. Energetic students, faculty and Royals supporters packed the Robertson Center gymnasium to capacity as they saw the Royals’ winning streak extend to four games.

As the “Let’s Go Royals” chant echoed in the gym for the first time this year, Bethel began the first set a little sluggish, trailing 5-2 in the early stages. The Royals rebounded nicely with help from freshman setter Hannah Wilhite, who was making her collegiate home debut. One of her six kills brought the crowd to life late in the first giving the Royals a 24-19 lead, and ultimately Bethel won the set 25-20.

“The crowd was amazing,” Wilhite said after the game. “They gave energy the whole match if we’re up or we’re down. It was so exciting to play in this environment.”

The Cougars responded in the second set by winning 25-22. They looked like they were gaining momentum in the match, taking the first three points in the third set and silencing the home crowd momentarily. But the resilient Royals wouldn’t give up. The end of the third set belonged to senior outside hitter Tina Hoppe, who had three kills in the last six Bethel points to give the Royals the pivotal third set with a score of 25-22.

The beginning of the fourth set started just like the third ended. The Royals got off to a quick 10-4 lead, thanks in part to senior middle blocker Karin Canakes. Canakes and Hoppe ended the game tied for team-high honors with 11 kills, with Canakes scoring a team-high 14 points. The Royals never looked back and ended the game with one of the loudest roars of the night after Wilhite’s team-high 34th assist went to Hoppe for a powerful kill to bring the RC to their feet and eventually see their Royals win the fourth set 25-16.

Senior outside hitter Brooke Olstad also contributed a team-high 24 digs and tied for second in points with 12.5. Sophomores Maria Claflin and Macie Gavic also added a combined 13 kills and six digs for the evening.

Head Coach Gretchen Hunt was impressed with her team’s resiliency when things look tough early on. “They didn’t look super rattled,” Hunt said postgame. “That is a characteristic of them.” Hunt also mentioned that she liked what she saw out of Wilhite, being that this was her collegiate home debut. “Overall, she’s so mature and knows how to run a team,” Hunt said of the Louisville product.

The Royals now head off to Stevens Point, Wisconsin to play in the Pointer Invitational this weekend before coming back to Arden Hills to play against Saint Mary’s University next Wednesday night at 7 p.m.