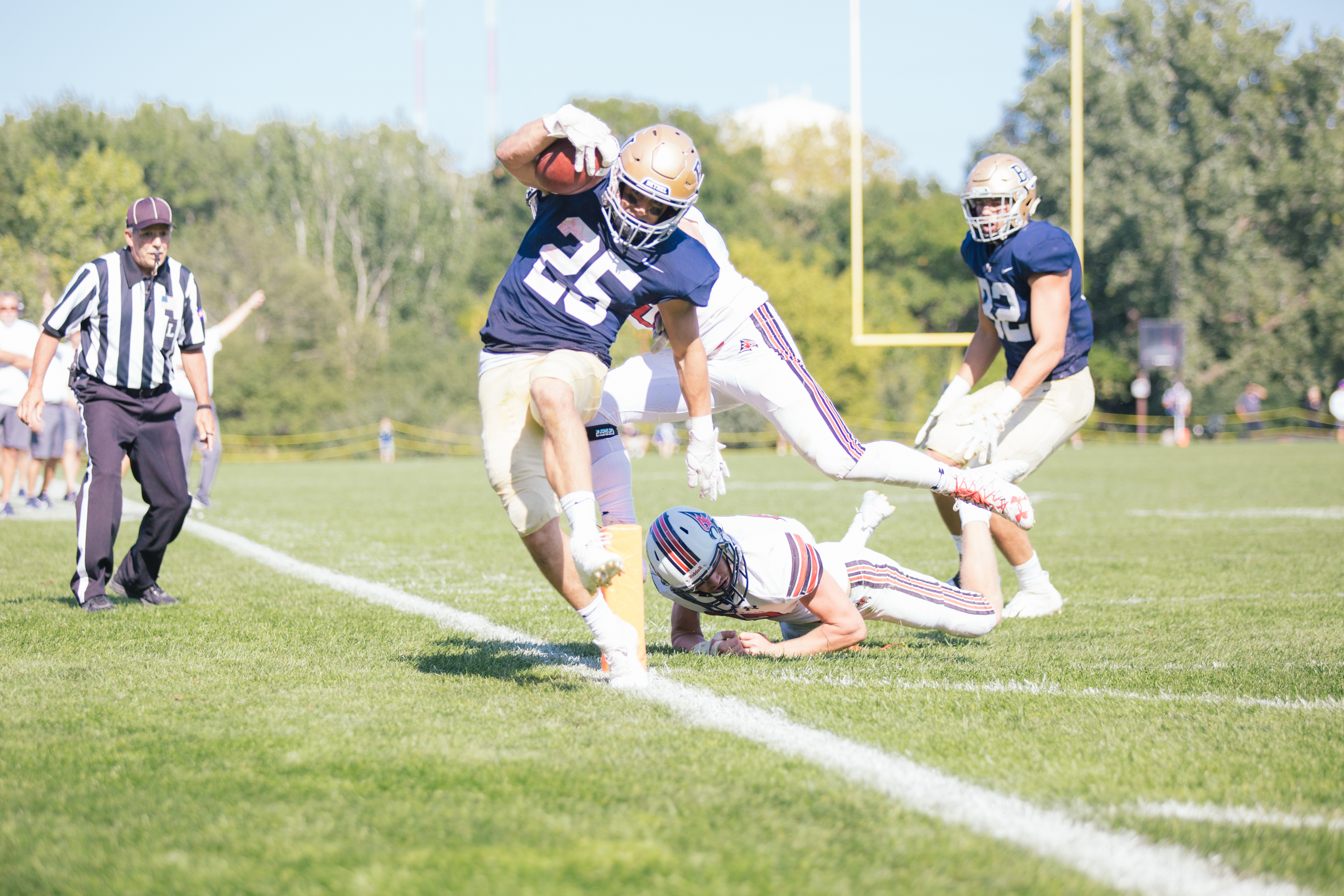 A bright, breezy afternoon reflected the mood at Royal Stadium on Saturday: the Bethel University football team defeated UW-River Falls in their home opener by a score of 32-27.

Offense was aplenty in the matchup of Royals and Falcons. Bethel tallied 468 total yards while River Falls accounted for 324.

The tone was set early in the game by the Royal defense—the first two River Falls possessions did not reach midfield. That staunch performance allowed quarterback Jaran Roste and the offensive unit to amass three scores on three first-quarter drives. A touchdown catch for Drew Larsen and short runs by Sam Gibas and Gideon Erharbor (the latter of which was set up by a big punt return from Tavian Swanson) gave Bethel a 20-7 after one frame, and a stagnant second quarter for both teams kept the same score going into the halftime break.

River Falls struck back in the second half, cutting the deficit to 20-14. After Roste left the game due to cramps in the third quarter, Jake Marsh entered and hardly missed a beat. Marsh racked up 53 passing yards on four completions in his first drive, culminating in a touchdown toss to wide receiver Joel Koenecke.

A similar quarterback situation occurred last week at Simpson, where Marsh started and exited with injury and Roste replaced him excellently. Head coach Steve Johnson was very impressed by the seamless transition from one field general to the next for the second consecutive game.

“For Jaran to come in last week and play the way he did, that was amazing,” Johnson said. “And then for Jake to come in and not miss a beat, it’s a tribute to those guys and [quarterbacks coach Scott] Kirchoff. That quarterback group is the real deal, it’s not like there’s three left guards in there eating Oreos!”

The two quarterbacks combined for 20 completions, 253 yards and two touchdowns. Marsh and Roste both spoke highly of the cohesion the entire offense shares, regardless of who’s taking the snaps.

“We’re doing so many things at such a high level right now,” Marsh explained. “As we were going through camp, I was like, ‘woah, we really got some good stuff to put us in position to succeed’, and that’s what it’s all about.”

“It’s really nice to have two quarterbacks capable of getting the job done,” Roste added. “We had a lot of guys step up and make big plays today. I think the offensive line played well even though [River Falls] was stacking the box. As a unit, it’s super awesome how we can do a lot of different things and win.”

The fourth quarter was a back-and-forth affair. Penalties halted River Falls’ attempts to inch closer to the Bethel end zone, and when the Falcons began a march downfield while trailing 26-20, linebacker Drew Ragsdale intercepted a throw by River Falls quarterback Ben Beckman with six minutes to go. The Royals extended their lead to 32-20 on another short scamper by Sam Gibas. The sophomore running back finished the day with 25 carries for 159 yards and two touchdowns.

But the Falcons would not be sent away easily. Top wide receiver Alex Herink caught his second score of the game on a 40-yard jump ball in the end zone with 90 seconds remaining to provide an onside kick chance for River Falls, who trailed just 32-27. The kick was unsuccessful and the Bethel offense met their necessary quota of a single first down to clinch the hard-earned victory.

Multiple times in half two the Falcons seemed to take control of the game with a big score or forced turnover — Bethel’s offense and defense both responded sufficiently when it counted. Coach Johnson was proud of the effort but knows some of the setbacks in the game—namely penalties — are controllable and fixable. “I love the resilience, but sometimes we’re making ourselves be too resilient,” he said.

Johnson is also proud of the way his players carry themselves on and off the field.

“They love each other like crazy,” he said through an emotional smile. “They really practice well, they practice hard, they pay attention, and they have fun.”

A recipe for a successful day of Bethel football.