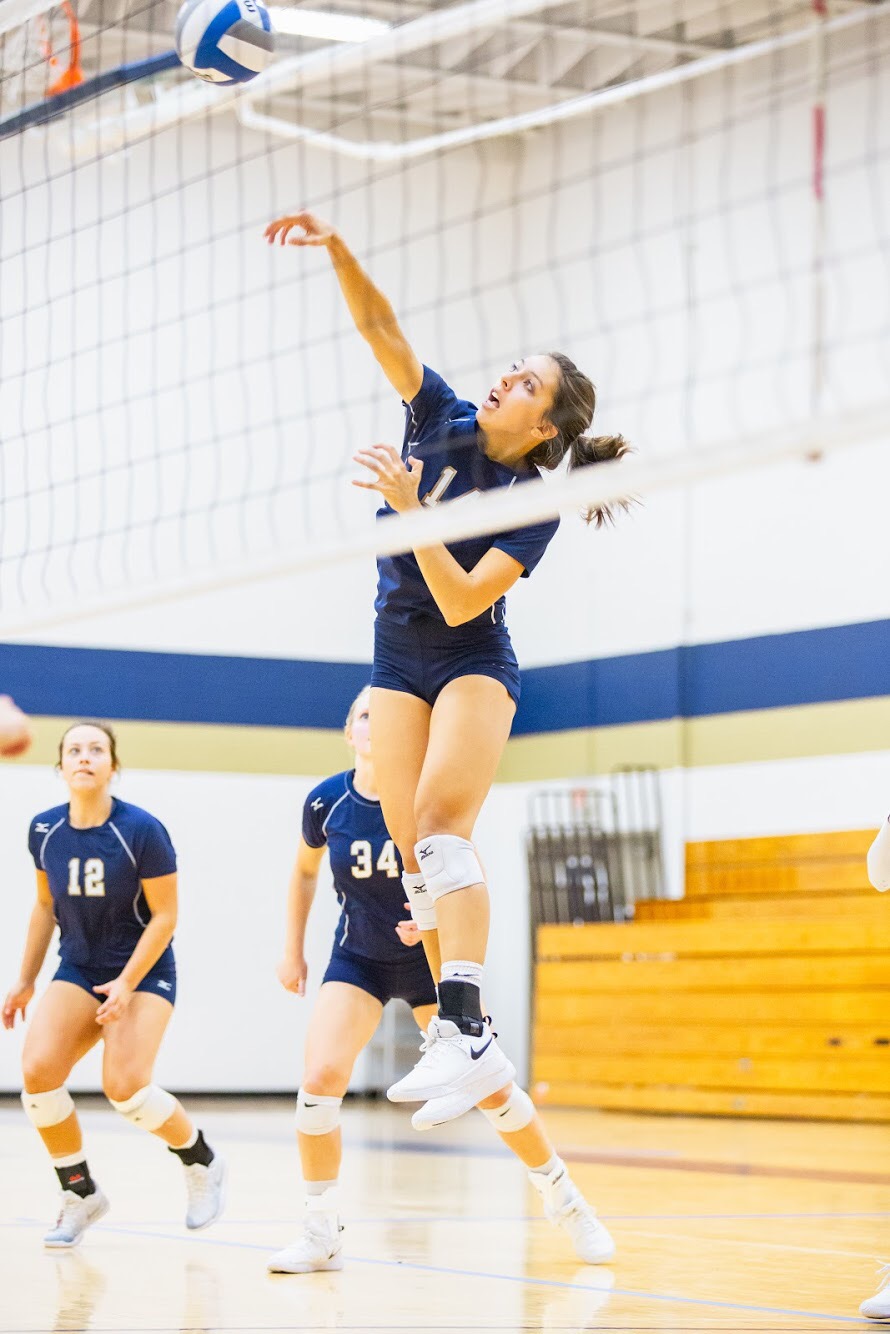 As the Robertson Center gymnasium filled up Friday evening with an assortment of teams and spectators, the Bethel Royals volleyball squad opened its home invitational with a victory over the University of Wisconsin-Superior Yellowjackets in three sets.

The Royals began the match right where they left off against Saint Mary’s the previous game by coming out of the gates with urgency and grabbing a quick 14-5 lead. As the Yellowjackets mounted their comeback attempt at the end of the first set, the Royals regained momentum thanks to sophomore middle blocker Maria Claflin, and 3 of her team leading 11 kills that won the last three points of the set for Bethel, ultimately taking the set 25-22.

In the second set, the Royals again had a firm grasp on the set leading 17-10. However, errors and miscommunication plagued the team and they squandered that lead as the set was knotted up at 20 a piece. But when the set was on the line, the seniors delivered. Seniors Tina Hoppe (10 kills) and Karin Canakes (team-high 10 blocks) helped pull the Royals past the finish line of the set with Hoppe providing the offensive firepower with a kill to the back corner late and Canakes blocking a Yellow Jackets attempt to prolong the set, with the Royals taking the set 25 to 22.

The third set was led by junior defensive specialist Dominique Dabu, whose team-leading 18 digs and all her dives around the court electrified the crowd and provided the defensive backbone that the Royals fed off of the rest of the set. With less drama than the first two sets, the Royals took control and never let go, winning the third and final set 25-15.

Momentum carries over to topple Saints

The second match of the evening pitted the Royals against the Saint Scholastica Saints. The Royals all evening were led by a balanced attack of offensive weapons, and this match was no different. Senior outside hitter Brooke Olstad and Hoppe tied to lead all players on the Royals with 12 kills, but Olstad was on fire with 4 kills for Bethel during the opening set win 25 to 18.

Bethel added to its dominance tonight by winning the second set 25 to 16, led by Olstad, Hoppe and sophomore right side hitter Macie Gavic, whose powerful kills sparked the Royals and furthered their momentum in the match. Gavic finished the match with six kills, three digs and three blocks.

Royals fans then enjoyed seeing their girls win their ninth consecutive set by finishing the Saints off in three sets with a score of 25 to 22. Freshman setter Hannah Wilhite continued her impressive freshman season with a match-high 36 assists, as well as timely dumps in between the cracks of the Saints defense. Wilhite was yet another part of the Royals depth that makes them so dangerous for other teams.

“It is great to feel like everyone is working together,” Hoppe said after the match. “There is so much support from the bench…it’s nice because we have so much depth.”

The Royals continue hosting their invitational tomorrow with the first match beginning at 11 a.m. against Luther College, followed by a 1 p.m. match against the University of Wisconsin-Stout.