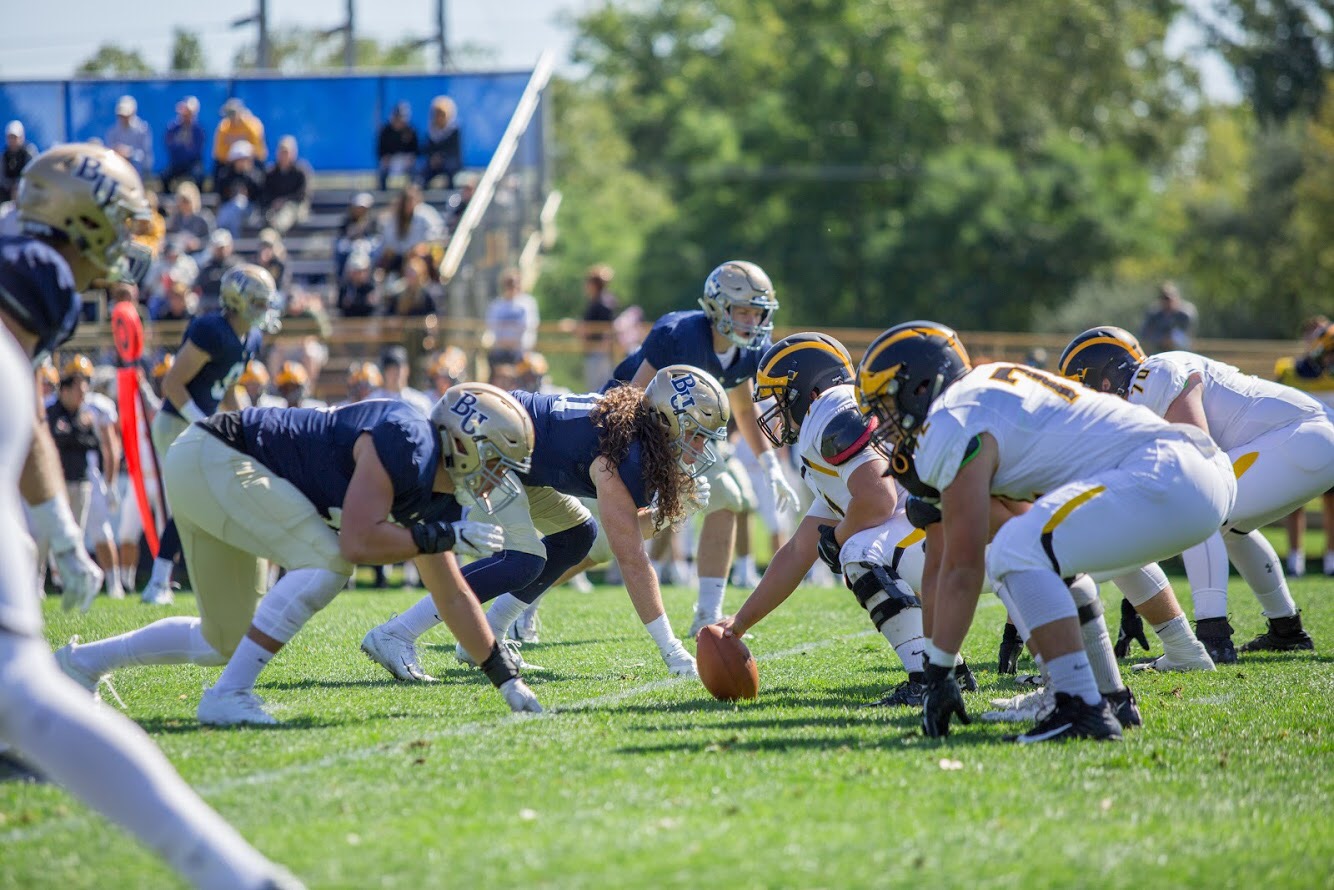 Two weeks have passed since Bethel football took the field for a game; last time they did, the offense showed off their talents. Today, the rest of the team was due for some glory.

A strong first drive sent Bethel marching down to Gustavus territory, but a fumble near the Gustie 20-yard line forced the defense to step in early. Next thing you know, the Royal lead was 2-0 on a punt snap that went into the end zone.

Quarterback Jaran Roste then commanded the offensive group across the green grass for a short touchdown run. He would repeat the act twice in the second quarter with two more scores, and led the ground attack overall with 15 carries for 117 yards. Sophomore running back Sam Gibas added 22 carries for 108 yards.

Roste and Gibas have been consistent options with the ball in their hands all season. Credit the Royal offensive line for their stellar path-clearing, allowing the skill players to make moves in the open field. “We’re clicking,” sophomore right tackle Jack Fiedler said. “It’s a great group of guys and we’re just as close off the field as we are on the field.”

Scoring the football was somewhat easy throughout the afternoon. The Gusties, on the other hand, faced many obstacles presented by the Bethel defense and special teams units.

In the second quarter, Gustavus was pinned deep in their own territory, and linebacker Trent Substad wheeled around the edge to get his hands on a punt attempt. Defensive back Brendan Whalen scooped it off the bounce and pranced into the end zone for a big momentum-boosting touchdown.

The Bethel defense was sharp all day. They held the opponent to under 150 yards of total offense, quickly getting off the field by halting Gustavus possessions. The Royals controlled the football in the game for 35 minutes compared to the Gusties’ 24.

Linebacker Drew Ragsdale was one of the most noticeable defenders flying around with energy. “The bye week was big for us, we got down and really focused on the details. I think our intensity in practice was really good [leading into today],” he explained.

Head coach Steve Johnson was pleased with his team’s total effort, as Saturday’s win was a bit more smooth and well-rounded than the victory over River Falls two weeks prior. “We call our special teams ‘Special Ops’ … they’re organized and their enthusiasm is great. It’s a big deal to us.

“Defensively, we talked about what we needed to do, and he’s a great quarterback [Gustavus QB Michael Veldman]. Our front seven were doing a great job of pressuring him, and we got a real good secondary. We’re pretty jacked up about that.”

By the six-minute mark in the fourth quarter, backups had entered the game and the game was all but over. Bethel emerged victorious in game three on the season, and will look to remain undefeated when they head down to Carleton College next Saturday.