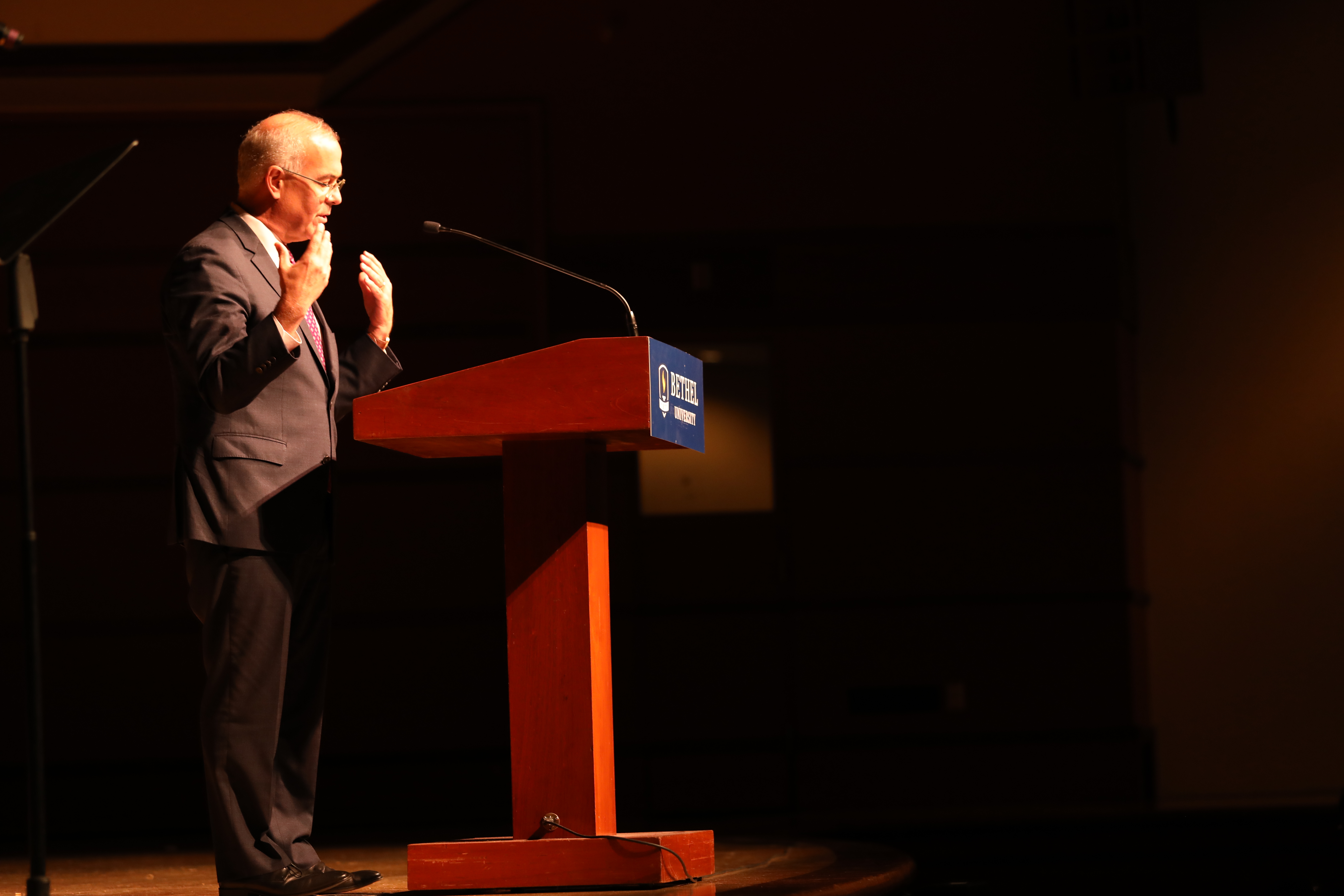 The conservative political columnist visited Bethel to speak about his best-selling book “The Road to Character” to a sold-out audience of 1,000 guests. The man behind the ink of The New York Times doesn’t have a bold personality, rather with timid waves he tentatively accepted the praise of the crowd. His 7-year old boyish smile, reflecting the age he decided to become a writer after reading “Paddington the Bear,” showed the humility and gratefulness of the well-known commentator.

His speech was followed by a short Q&A given by two Clarion journalists, Maddie DeBilzan and Jared Martinson. Brooks placed his “Truth Matters” sticker on his jacket, giving him the appearance of  a political candidate. But his speech did not speak of political controversies as much as it spoke of moral casualties of today’s era.

Brooks emphasized the importance of a desiring heart and a rational mind, referencing to the works of Augustine. Early in his speech, he told an analogy of humanity’s strongest desire of transcendence that is never fulfilled by the world’s promises of happiness:

“A guy bought a house with a bamboo stand by his driveway and he didn’t like bamboo so he chopped down the bamboo stand. He took an ax to the roots system. He poured plant poison on what was left of the roots. He put down three feet of gravel and then he covered it with cement. And two years later, a little shoot of bamboo was shooting up through the cement.”

Brooks followed by saying that all humans have a desire of love and intimacy. Those without intimate connections suffer through life. Brooks said that today’s independent society praises the lone wolf, but through that value, we have become divided and alienated.

Brooks highlighted growing suicide rates and deaths from opioid addictions in the past year, all results of increasing isolation from the dwindling sense of community.

In Benson Great Hall, Brooks asked the audience to believe that they have a soul, a part of all of humanity that doesn’t differ in weight, color, age or size. A part of us that isn’t more successful or less successful than someone who works for The New York Times. “Our souls,” Brooks said, “long for transcendence.”

Like the bamboo stand, the soul, although powerful, can be easily covered over by a “bad culture.” One such like today’s that looks to the self to solve problems rather than others.

Brooks shared his experience from a growing worldview that he has gained from his times of being a journalist in New York, working in Brussels for five years covering events such as the collapse of the Berlin Wall and the fall of the Soviet Union and now traveling to a different place each week where he meets people who are “building their communities one relationship at a time.”

One community he shared was of an organization called Thread, which was started by Baltimore resident Sarah Hemminger. She was ostracized by her own community after her father reported the town’s pastor for embezzlement of the church’s fund. Thread is a program that fosters relationships with underperforming high school students with an average of a 0.45 GPA who are at the risk of not graduating. This organization cares for the students by providing a “network of relationships” through volunteers, driving them to school and providing food. Physical touch is a factor that has been noted to be of great importance for shaping someone’s inclusivity within their community and in their life.

Professor of journalism Yu-Li Chang-Zacher was inspired by the call to have the heart to see the needs of her community.

“That’s what we [as faculty] are here for our students as well,” she said. “We are not just here to give our students tons and tons of knowledge, yes that’s important but more important than that, is the character shaping part of education. We want to inspire our students to see their potentials.”

People looking for the meaning of life and not being able to find the answer in the world’s empty  promises have too commonly become silent tragedies in the use of drugs and in the ending of their own lives. Brooks’ answer is to accept the call to focus on communities. The solution, he argued, is working from the bottom-up. From the 2016 election, it is clear that the answer for change is not from the top of the political hierarchy. Change must happen at the local level where people are impacting lives one person at a time.

“There’s a rising sense that we need to build relationships with one another, we have to stop thinking about self. We need a moral, and cultural, and eventually a political revolution,” Brooks said.

From his own experience, traveling to a different place each week meeting with communities, Brooks has witnessed this hope firsthand: a “we over me” ideology that will better today’s society and culture.

The audience engaged in lively conversation as they left the auditorium, encouraged by Brooks’ call of surrendering self and submitting to their neighbors.