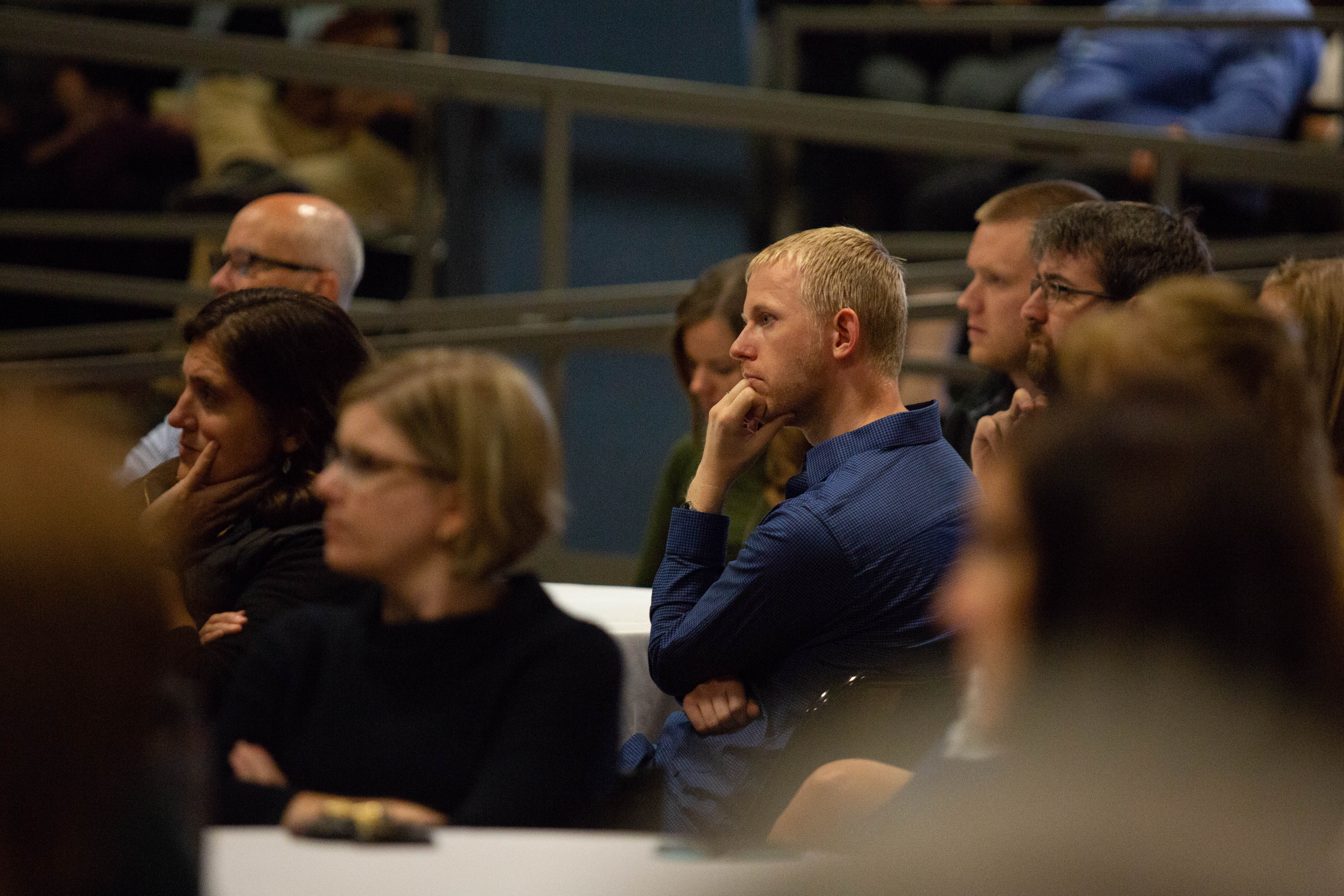 The Bethel community rallies together in various ways to address recent changes.

Students and faculty crowd the Alumni Lounge as they wait to say goodbye to a mentor and friend. Faculty members sit, arms crossed and silent, in the open space of the Underground. In the Eastlund Room, a group of students kneel down in prayer.

It had only been 11 days since the Sept. 17 announcement of faculty, staff and budget cuts. The fallout was just beginning.

Many supportive spaces were provided this week for those processing the recent cuts. A time to share stories and say goodbye was held for Carol Chang on Monday. Tuesday morning was a chance for faculty and staff to hear from Bethel University President Jay Barnes and ask questions. During that same time, student prayer group Without Ceasing held their weekly meeting.

The line to share a few moments with Chang weaved around the room and out the door Monday afternoon. Alumni, students, faculty, staff and countless others filled the Alumni Lounge to honor Chang’s contribution and leadership at Bethel.

Chang served as the associate dean for international programs for 28 years and advised the Mu Kappa group. Mu Kappa connects international, missionary and third culture students, providing them a space to share their experiences and find a consistent community amidst the many changes college life brings.

Junior art student and Mu Kappa member Chase DuBose chose Bethel specifically because of the support system she could lean on when moving from Europe to the United States.

As the faculty advisor, Chang committed herself to caring for the students however she could. During the holidays, she would invite students over to celebrate Christmas when they were not able to visit their own families.

“Mu Kappa was you [Carol],” DuBose said. “You made it so inviting, so comforting, a true family.”

While people greeted and thanked Chang, a group of Mu Kappa students shuffled out of the way of the growing line. They questioned why they were not allowed time to say goodbye within the Mu Kappa group.

“It’s not about us, it’s about Carol,” Mu Kappa member Nikole Cairns said. “It’s good that so many people are here so that she knows how much she was loved.”

And people did not hold back when offered the chance to express their gratitude publicly. Vice President for Student Life Dr. William Washington opened up the last portion of the gathering time for people to share how Chang had personally impacted each of their lives.

“Thank you for the work that you’ve done here, your ministry, your integrity, your care,” Washington said. “It will be missed and cherished, but never forgotten.”

Assistant campus pastor Paul Kong described Chang’s influential role in his journey. From 18 years ago as a Bethel freshman to his current position in the Office of Christian Formation and Church Relations, Chang encouraged Kong to pursue leadership. He attributes his current pastoral position to the consistent guidance and support Chang provided.

“I don’t think anyone loves us as much as you love us, Carol,” Cairns said. “We don’t call you mama bear or mama Carol lightly. We really mean it.”

Senior art student and Mu Kappa leader Eveline Tcacenco explained why Chang’s role was so crucial to their group and this campus.

“Carol was the person who provided that stability that we so lacked, which is why such a sudden departure is kind of a hit,” Tcacenco said. “She is that parent, that mentor figure and that one stable person that we could always come back to.”

Mu Kappa students and alumni started a petition and wrote letters to express their concern, but they acknowledged the authority and finality surrounding a decision like this. Even freshman students who have only known Chang for a few weeks asked Tcacenco how they could help, quickly picking up how much she meant to the group.

“It also shows a lot about how Bethel prioritizes the budgets and it’s really hard for us to see that Carol is not considered an essential part of this community because she so is to us,” Tcacenco said.

Faculty and staff gather to process

Silence reverberates through the open air of the Underground. Faculty and staff members crowd around circular tables. They sit with blank faces and crossed arms. Bethel University President Jay Barnes stands at the microphone up front, his red tie a spot of color in the gloom.

“Any other questions?….It feels a bit like a Quaker meeting in here,” said Barnes.

The faculty and staff community meeting on Sept. 25 was one filled with hushed whispers and solemnity. The meeting provided an opportunity for community members to hear first hand from Barnes about the budget cuts announced Monday Sept. 17. Cuts included six CAS faculty positions that were eliminated and three open positions that will not be rehired. Theater, sociology, film studies and media production are among the departments that will undergo change, with the theater department being cut completely.

At the community meeting on Sept. 25, Barnes addressed the budget cuts and gave an enrollment update, followed by an update on faculty working groups. After this time, faculty and staff were welcomed to step up to the microphone to ask questions.

“Right now I feel like we’re being disrespected on faculty,” biblical and theological studies professor Jim Beilby said. “Even though I understand the financial issues, and I would hate to have your job, Jay, it seems to me and I worry that people are not sufficiently aware of the precipice we are on with respect to culture…I guess I’m asking, what can you do to address some of those more fundamental issues?”

“I believe that we are trying to do our best,” Barnes said in response. “It’s a loss process, it’s a grieving process, and I believe that we will go through that together…I’m sorry for the hurt that has come.”

Vice President for Student Life Dr. William Washington reflected on the nature of the cuts after the meeting. He hopes that the Bethel community can remain positive and seek Christ in a difficult time.

“It has been a difficult and trying time,” he said. “These decisions have been excruciating and they’ve been hard…and they’ve been heavy. It’s been a challenging time, but I’ve sensed God’s spirit and his leading in the midst of it.”

Christine Osgood shares this spirit of striving for positivity. During the meeting, she asked Barnes how the community can come together to be helpful.

“What do you need from us in order to move forward well together?”

It is this question that faculty and staff will continue to dwell on as the aftermath of the budget cuts plays out.

At 11:10 a.m., Bethel University President Jay Barnes stepped out of his office and into the flurry of Bethel students walking from classes. He walked alongside Cara Wald, chief Human Resources and Strategy Officer, towards the Underground, a large room on the first floor where students meet to play games and spend time with God. But this Tuesday, there was be no celebration. President Barnes stood before the Bethel faculty to address the recent budget cuts.

In the Eastlund Room, one door down from the president’s office, seven Bethel students and assistant campus pastor Donna Johnson gathered for Without Ceasing, a weekly prayer meeting. Beginning their 45 minutes together, Bethel sophomore Ranae Paleger, set the prayer focus for Sept. 25.

“I want to encourage us to remember 1 Peter 5:7 always. To cast, or throw, all our fears and anxieties onto God,” Pelager said, not realizing the implications of those words for that very moment in a different room on Bethel’s campus.

“Pray for them [Barnes and Wald]. They had to make some difficult decisions,” Johnson told the students as the atmosphere turned somber.

The students then broke from the group and spread to all corners of the room. One wrote in a journal at a table, another rested cross-legged on the floor. Pelager turned on music and began walking back and forth in rhythm with her prayers. Johnson kneeled in front of a chair, resting her elbows on the seat and covering her face with her folded hands.

“When your cares have buried you and there’s nothing left to do…” Will Reagan sang through the phone speakers. “Lay it all down at the feet of Jesus.”

Their silent prayers continued for 15 minutes until Pelager brought everyone together for community prayer.

“God, be with faculty,” prayed Bethel senior Isaac Scanlon, “Be with them during this hard time. God, you are sovereign over this situation.”

Pelager closed with one more prayer.

“I pray that we take a step back from busyness and stress from homework, work, and everything, and seek you first in every decision. Amen.”

Prayer brought these seven students and one campus pastor together at a time when grief abounded in Bethel’s halls. The beloved professors and staff suffering from the decisions made should know many in their community are praying for them.

“[Prayer] is crying out to God because we depend on him,” Pelager said, “and that’s for every single day, not just one day a week.”

0 comments on “Gathering amidst pain”