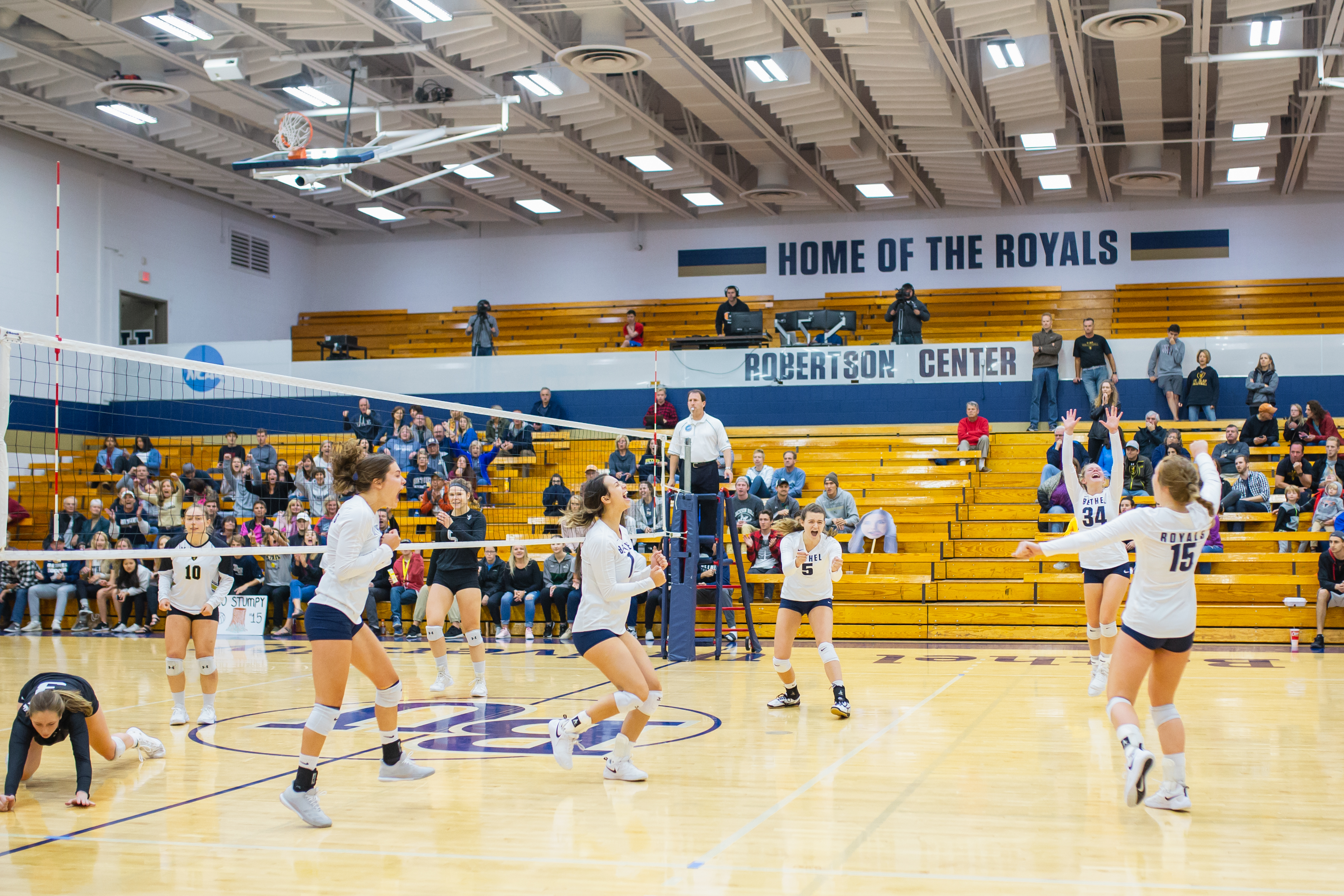 The first match of the doubleheader Saturday afternoon in the Robertson Center gymnasium pitted the Royals against their conference rival, the Saint Olaf Oles.

Before the first serve commenced, the energy in the gym was palpable. The bleachers were parted as if it were the Red Sea: Oles fans on one side and Royals supporters congregating on the other side.

The Royals jumped out to a quick 14-5 lead, led by their defense, which returned anything the Oles were putting over the net. But as the set continued, the stout defense showed spurts of sloppy play. St. Olaf jumped right back into the set, eventually tying it up at 19 apiece. When the Oles finally did take the set lead, Bethel went to a senior they trusted heavily: outside hitter Tina Hoppe.

Hoppe carried the team down the stretch, with kills to tie up the set at 21 and 22 all. Freshman setter Hannah Wilhite added an ace late in the set, barely clipping the end line to the dismay of the Ole crowd.

Ending the set found Hoppe once again laying a kill on the Ole defenders, propelling the Royals to taking the opening frame 25-22.

Trying to ride the momentum into the second set, St. Olaf was determined to tie up the match. The two teams went back-and-forth the entirety of the frame, feeding off their respective fan base’s energy. As the set was concluding, the score of 22-22 was eerily similar to the previous set. The result was no different.

Hoppe once again was the leader down the stretch, powering home a clutch kill to save the set at 24 all, and contributing her one and only block of the match to win the set 27-25 in overtime and cause Royals supporters to erupt off the bleachers in thunderous applause.

This momentum that the Royals fed off of only grew into the third set. By the time the score was 12-4 in favor of Bethel, the Oles had used all their timeouts and lost all their energy. Errors and sloppy returning were the downfall of Saint Olaf in the third and final set, giving Bethel a 25-11 dominant set win.

Along with Hoppe’s match-high 13 kills, senior outside hitter Brooke Olstad added 8 kills along with 9 digs, followed by sophomore right side hitter Macie Gavic’s 7 kills and sophomore middle blocker Maria Claflin’s 6 kills. Wilhite also had a match-high 4 blocks to go along with her team-high 33 assists.

In the second match of the day, the Royals took on the Muhlenberg College Mules, coming all the way from Allentown, Pennsylvania.

The match began with a tightly-contested first set, with neither team having more than a 2 point lead at a time. It eventually came down to an overtime scenario, with both teams knotted up at 25 a piece. But thanks to the Mules’ pressure offensively and consistent defending, Bethel could not overcome their opponent in the opening frame, dropping it 27-25.

As the Royals were looking to rebound off the opening set loss, they turned to a multitude of offensive weapons to lead the way in the second frame. Senior middle blocker Karin Canakes contributed a pair of kills and timely blocks to aid the Royals’ rebound in the match, along with Hoppe providing energy to the team as the set began with a block and two kills. With little stress in the set, Bethel responded with a 25-15 set win.

Defense was the focal point of the third set, with the Royals overwhelming the Mules in that department, eventually leading to a 25-15 set win. Sophomore outside hitter Allie Fauth exemplified that, putting up a match-high 33 digs, many of them pushed her to the floor for dives. Fauth has seen an increase in minutes on the court recently for her ability to do just that and she is ready to do whatever it takes to help the team.

“Whatever role she [head coach Gretchen Hunt] gives me, I am going to embrace it,” Fauth said post-match.

But as the Royals were thinking of closing out the match in the fourth set, the Mules had other plans. Muhlenberg’s ability to create opportunities at the net proved to be their biggest strength in the frame, powering home multiple kills and creating confusing for the Royals defense. Bethel tried to make a late run by trimming the 19-12 Mules lead to just three at 23-20, but it was too little too late. The match was pushed to a fifth set after Muhlenberg won the fourth 25-20.

In the fifth set, momentum was transferred from team-to-team as fast as the ball was spiked over the net. The Mules opened up the shortened set with a 6-3 run, countered by the Royals tying it up at 8 all. But the momentum changed for good when Wilhite dropped an ace that confused the back line of defense for the Mules, and especially when Gavic had the loudest kill of the evening, bringing the Bethel congregation to their feet with roaring cheers. Bethel ended up taking the fifth set 15-9 and outlasting the out-of-state competition in five hard-fought sets.

Once again, Hoppe led the team with 15 kills, followed by Claflin’s 12 and Gavic’s 11. Wilhite finished with a team-high 43 assists, 9 digs and 3 blocks. Canakes ended with a match-high 5 blocks as well.

Next up for the Royals is a battle against the Bennies of the College of Saint Benedict, Friday evening at 7 p.m. in the Robertson Center gym.