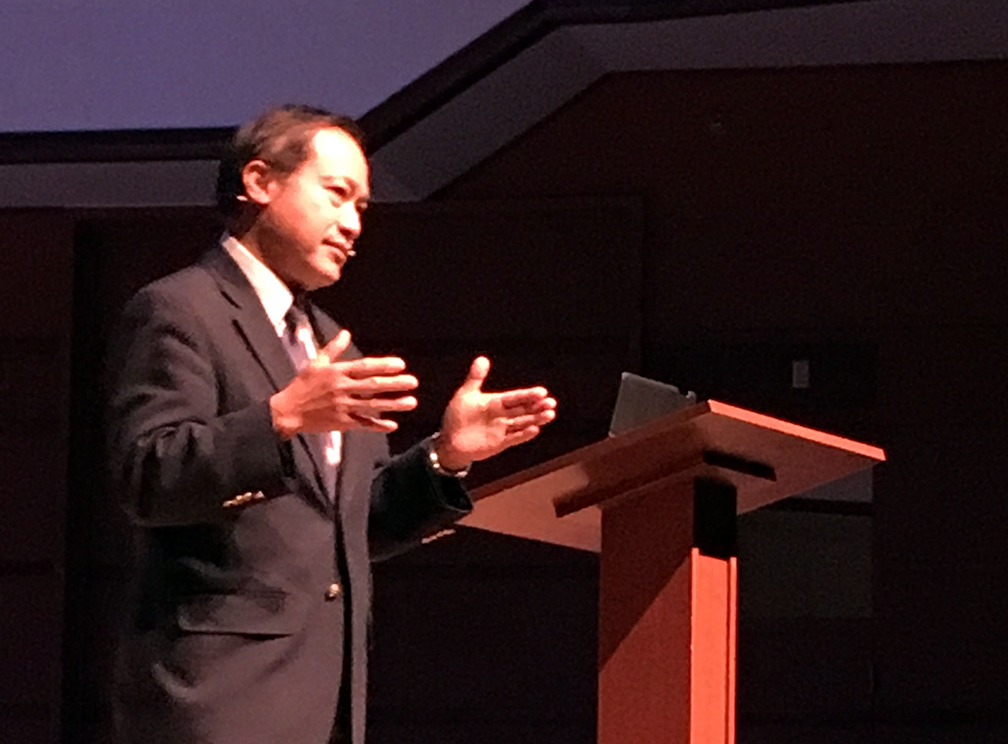 T Cher Moua spoke at Bethel as part of the Strangers in a Strange Land series.

By Judd Martinson, for The Clarion

T Cher Moua entered the Mekong river as a child not knowing if a snake or alligator swam toward them downstream. The night set with a thick darkness as if it were touchable. Unable to swim across the current, Moua found himself and his niece stuck in a whirlpool overnight.

As part of a convocation chapel series at Bethel University titled “Strangers in a Strange Land,” Moua, an author and pastor at Inner City Ministry of Cru-Minneapolis/St. Paul, shared his story Sept. 26 in Benson Great Hall of fleeing from Laos to Thailand and later finding asylum in the United States.

After scavenging for leaves, fruit and roots in Laos, Moua’s family needed to find a better way to survive. In 1978, the family decided to cross the river to Thailand.

Moua and his niece swam in the whirlpool from about 9 p.m. to 5 a.m. the next morning until a group of Thailand soldiers pulled them into a boat, Moua said.

“The first question they asked was, ‘So where is your money?’” Moua said.

He had no money and had abandoned his clothes. The soldiers took them ashore, built a fire, clothed them and fed them breakfast. The lead soldier gave them money and told them to send Moua and his niece on a bus to rejoin their family. After spending eight months in a refugee camp, Moua, his mother and his brothers gained asylum in the United States.

Moua recalled thinking about how he lacked real-estate of his own, and even a country to call his own, when the words of Jesus in John 14:1-3 came to his mind. “Do not let your hearts be troubled. You believe in God; believe also in me. My Father’s house has many rooms; if that were not so, would I have told you that I am going there to prepare a place for you? And if I go and prepare a place for you, I will come back and take you to be with me that you also may be where I am.”

Moua said his home is in heaven, where Jesus is preparing a place for him.

Every day, people are drowning in their metaphorical rivers and crying for help, Moua said. He challenged those listening to reach out and rescue them, like Jesus rescues.

Erik Beckers, a freshman majoring in Spanish, said it’s important to talk with people going through hard times, but also checking in periodically to see how they’re doing.

“I’ve seen that some students come in here really scared of their circumstances,”  said Lauren Wolkerstorfer, a student chaplain and sophomore psychology major.

Moua said Jesus is on his boat, ready to pull people out of rivers. He encouraged listeners to call out for help.