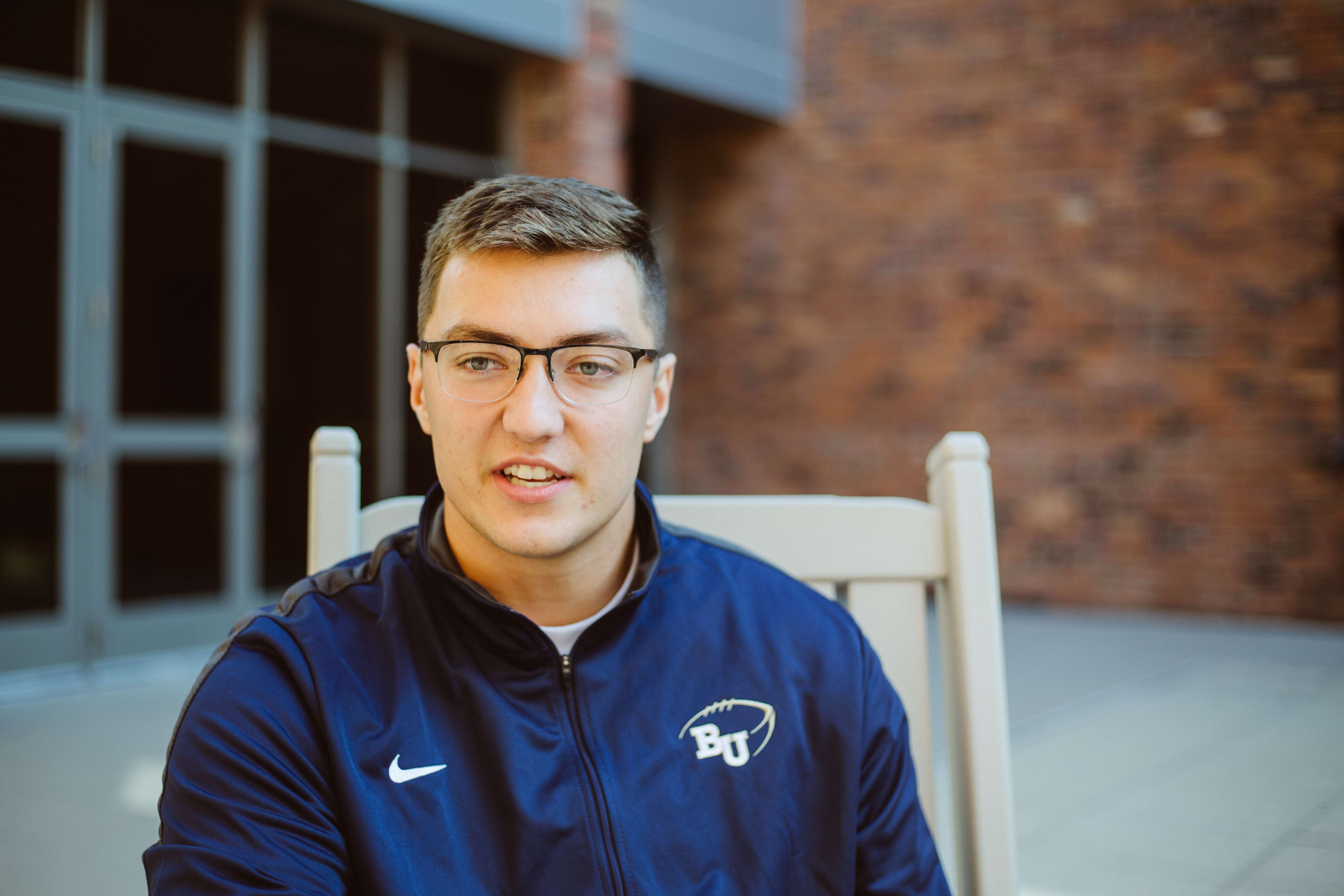 From the first day he stepped on campus, Jaran Roste knew something was different.

However, the stage was something all-too-familiar. Being a three-time First Team All-Conference honoree at the quarterback position, a First Team All-State participant and a Mr. Football finalist at Alexandria High School, Roste is used to the bright lights. Walking-on at the University of Minnesota was supposed to be the next big step in football career of the Alexandria product.

But during his one-year stint at Minnesota, he found himself being drawn somewhere else. It was an institution that though he never played a snap for, he found that he had known for a long time.

That place was Bethel University.

Roste, majoring in political science and business along with accounting and finance, is the youngest of three siblings, the older two both Royals themselves. His older sister, Jazmin, graduated two years ago and his middle sister, Jana, is a senior at Bethel, living as an RA in Edgren Hall and competing on the softball team. As the last of three siblings to attend Bethel, Roste credits the ease of the transferring transition in part to the family presence on this campus.

“Friends and family have been super supportive in my decision to transfer,” Roste said.

After being redshirted last year at the U of M, Roste had been itching to get back to playing the game he loves, regardless of what position that may entail.

“Coming from being fourth string [quarterback] at the U,” Roste said, “I want to play.”

Despite not starting in training camp, nor the season opener versus Simpson College, Roste was prepared to do his job when his number was called, eventually playing quarterback as well as participating on the punt team and hands team, which fields the onside kick attempt during kickoffs.

“It was a blessing to get back in there after two years of not playing,” Roste said.

Coming from a competitive high school background and a brief season with the Gophers, Roste’s individual goals and blended hand-in-hand with the team’s goals. “We’ve got a goal. To win a MIAC championship. Whatever I can do to get us to that goal I’m going to do.”

But for Roste, football plays only a part of why he chose to leave a Division I school for Bethel University.

“It’s not just football here at Bethel,” Roste said. “It is not what you do just on Saturday, but what you do Sunday through Friday.”

Roste added that he enjoyed his time with the Gophers but was drawn to the incorporation of faith from Bethel’s culture.

“Coach [Johnson] focuses more on building you as a person, bigger than football. The whole staff is so great. They are on fire for the Lord.”

As well as Johnson, Roste appreciated quarterbacks coach and former Royals quarterback himself Scott Kirchoff for his insight into playing the position.

Kirchoff, who played quarterback for the Royals from 2000 to 2003, led the team to two MIAC championships and three NCAA playoff appearances. He also holds multiple passing records for the school and sees positive traits in Roste.

“Jaran and Jake [Marsh] have been very supportive of one another,” Kirchoff said. “They care deeply for one another.”

With the recent split in playing time for the two signal-callers, Kirchoff is very impressed with the poise that both quarterbacks have shown. The junior Marsh has totaled 98 yards with 1 touchdown and 2 interceptions in the early stage of the season, while the newcomer Roste has put up 372 yards combined with 3 touchdowns and 1 interception. But even with the discrepancy in statistics, Kirchoff is impressed with the response of both his gun-slingers. “It [the split in playing time] is a reflection of their character,” he said.

“I spend a lot of time with Jake,” Roste explained about his fellow junior quarterback teammate. “He’s been a dude I’ve looked up to a lot.” Roste went on to say that he has been asking Marsh for advice as they share similar roles on the team, but can’t say enough about how Marsh has been there for him. “He’s been very supportive.”

As a newcomer to the Royals football squad, there were obvious questions to how Roste would fit in with this very close group of guys. The answer came in one word to describe the relationship with the upperclassmen on the team: “phenomenal.” Roste appreciates that he can come together with a group of young men who are like-minded in their faith as Christians and who want to build him up.

With how close he has gotten to this group of young men, Roste only has one remorseful feeling about choosing to play somewhere else last year.

“My only regret would have been not coming to Bethel in the first place,” he said.

All statistics recorded in this article are official as of 9/22/18.

0 comments on “More Than Football”