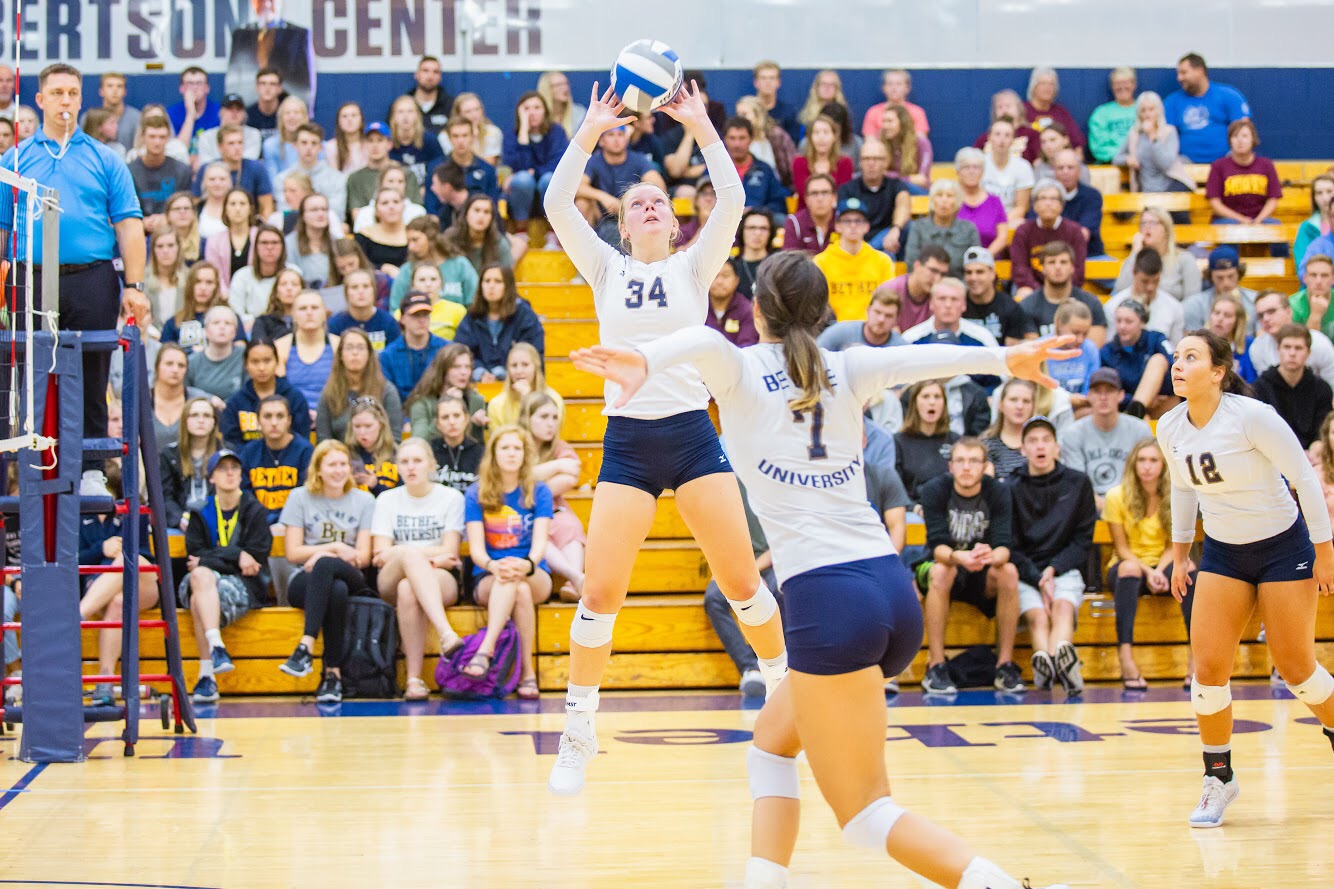 For freshman volleyball player Hannah Wilhite, finding a place where she belongs wasn’t too tough.

That’s a long way from Bethel University. More than 700 miles. So how does someone from the Bluegrass State end up in Arden Hills?

“I heard of Bethel thanks to family that lives close by,” freshman Hannah Wilhite said. “I was looking for three main things in a school: a great volleyball program, a great nursing program, and a Christ-centered environment.”

Wilhite is a setter for the Bethel volleyball team, a group that is off to a winning start in 2018. She’s played in all 57 sets so far. She is sixth on the team in kills, but first in smiles—even after hitting a few serves out of bounds against Wisconsin-Stout on Saturday. There’s a reason for the smile, one that goes beyond the lines of a volleyball court.

“Everyone here is just so incredibly loving. Being here has exceeded my expectations,” Wilhite said. “Everyone wants to support you and see you grow in whatever you’re doing.”

As a setter, Wilhite is responsible for placing the ball in the perfect spot for her outside hitters to score. She has tallied 500 assists on the season, which lands her in the top 20 across Division III nationally.

“Coming in as a freshman, you feel like the ‘little one’ or ‘the one everyone wants to push down’, but it’s totally not that way. It’s been super cool how we come alongside each other through our ups and downs.”

“The unique things she brings to the table are ability to withstand the pressure of running an offense, and the ability to run really quick tempos,” head coach Gretchen Hunt said. “Her height—she’s a little taller than a lot of setters—and her jumping ability allow us to get our offense started a little faster.”

More importantly to Wilhite, she is receiving guidance and direction in life from the same people she’s assisting.

“The team is just like a big sisterhood,” Wilhite said. “They just want to become so close to you and guide you.

“Coming in as a freshman, you feel like the ‘little one’ or ‘the one everyone wants to push down’, but it’s totally not that way. It’s been super cool how we come alongside each other through our ups and downs.”

Wilhite loves what she’s getting relationally on the volleyball team. But there are still matches to play and goals to be reached.

“We all want to see each other succeed. We also want to make the NCAA Tournament. We’re so talented so that’s a goal for us,” she said.

“I think one of the biggest things is that Hannah wants everyone to be successful, and our upperclass players want her to be successful as well,” Coach Hunt said. “That’s a great position for a freshman to be in, with so much support around her.”

Individually, the expectations Wilhite set for herself are tangible—but the position she plays as a setter goes deeper than the game.

“I want to look for more ways to help my team score and beat the best teams in the conference,” she explained. “I also feel like setting my team up for success by serving others is important.”

Wilhite and the Royals are playing well, there is no doubt; but what really gets her attention is that “Christ-centered environment” she searched for in a school.

“It’s just blown me away how supportive and friendly everyone is,” she said through an almost disbelieving smile.

All statistics recorded in this article are official as of 9/22/18.

0 comments on “Setting Up Success”