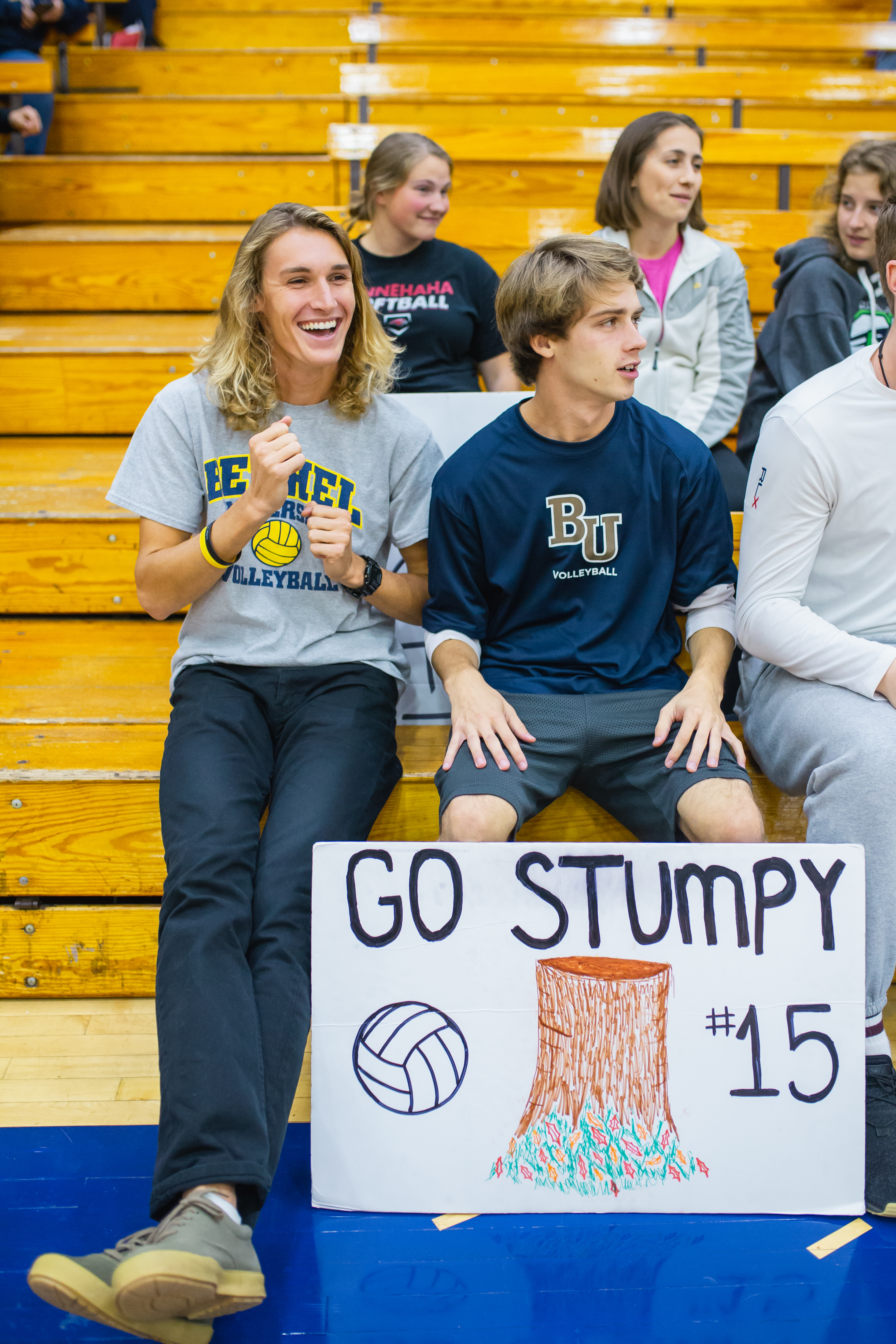 Justy Larue leaps from the bleachers as the sound of leather hitting wood spreads throughout the Robertson Center gym. Holding a poster board adorned with colored marker, he celebrates like a Super Bowl attendee. And just as the Super Bowl has cheerleaders, Bethel volleyball has Justy.

Larue, a senior RA, has been to almost every game over the past two years. He makes it a point to spread the good word to his friends and residents.

“Volleyball is definitely the most hype event at Bethel,” Larue said while standing near the front of a living room crowded with over 20 of those residents.

As many students and spectators simply watched as the Royals competed against the UW-Stout Blue Devils on Sept. 21, Larue dove headfirst into the experience. With his cheer signs held high, he led chants to encourage the team. “Let’s go Royals!” boomed from the stands and Larue stood like a captain aboard his ship shouting loudest of all.

Throughout the match, the energy level remained constant. It didn’t matter whether the Royals were down by five, tied up, or demolishing the opponent; the fans were hyped all the same, and that’s thanks to Larue. Wherever he goes, his energy, his cheers, and his signs come with. He is often referred to as “the sign guy” by players on the team, other students, and himself. However, his impact on volleyball culture at Bethel runs much deeper than a silly title.

On the rare occasion that Larue does not stroll into the gym before a majority of the fans, it has an impact on the team. The players keep a constant eye out, heads turning toward the door after each warm-up rep.

“Before the game, the other girls and I were worried,” senior starter, Brooke Olstad said. “We were asking, ‘where’s Justy? where’s Justy?’”

He arrived. And he made sure people knew it. He led interactive cheers such as the rollercoaster and leapt off the bleachers at every close point.

“It’s fun being the hype person,” Larue said. “It’s fun to bring the energy to every game.” After the win over the Blue Devils, he traveled around the court congratulating the players like he was part of the team, energy still flowing abundant. His hands connected with those of both starters and benchwarmers, cracks of high-fives sent ringing through the gym.

In a way, Larue is part of the team. A big part. Games would be much quieter without him screaming at the top of his lungs “Gooooooooooo Royals!” and sprinting back and forth in front of the crowd. He brings an element of joy to every game that is appreciated by everyone around him. The fans show their support through the smiles that spread across faces and the overall decibel level around the court.

To see Justy in action, come to any volleyball game. If you weren’t able to make it to this one, don’t worry. He’ll make sure you’re there next time.