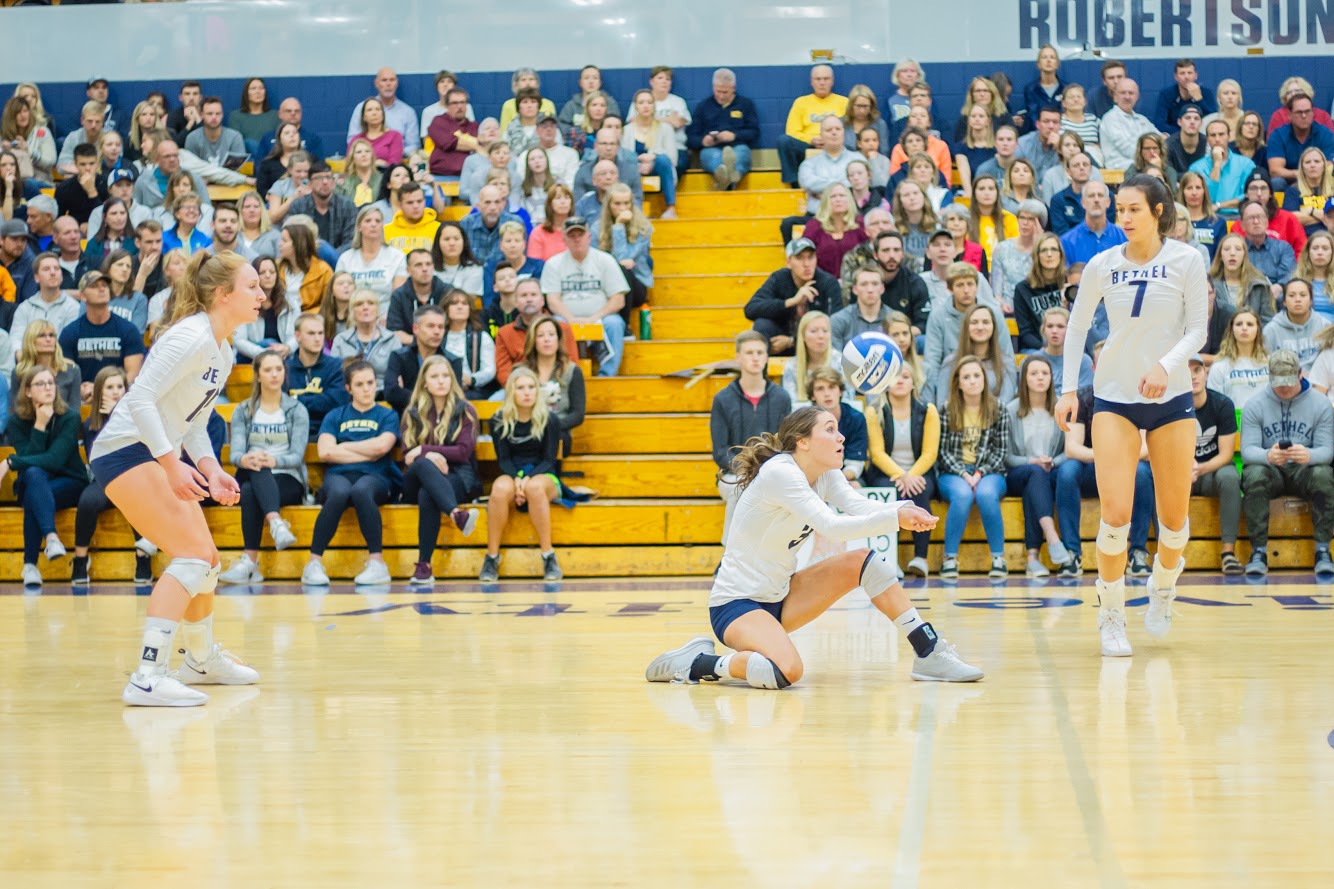 As spectators filled the Robertson Center gymnasium Friday evening for the final time this regular season, the Bethel Royals volleyball team looked to add one more home win to their resume. This time, it was against MIAC conference foe St. Thomas.

Coming into the match, the Royals and Tommies shared the same 5-2 conference record, with this match determining the sole owner of third place in the MIAC.

Early in the first set, the Tommies came out to a roaring start. They opened the match on a 9-4 run, and eventually led 18-8, fueled by wide-open kills and sloppy Royals defense. With more errors and a lack of energy, Bethel looked completely outmatched. They didn’t salvage another point the entire set, with the score ending 25-8 in favor of the Tommies.

But, as this week has been for the Royals squad, they were resilient. Led by sophomores Macie Gavic and Maria Claflin, Bethel started the set on a 7-2 run and regained its mojo again. With kill after kill, a newfound energy was in the building and the team was finding a groove offensively, sparked by four of Gavic’s team-high 12 kills in the match and three of Claflin’s eight. Once they had a firm lead, the Royals never looked back, taking the second set 25-18.

Head coach Gretchen Hunt was looking for that bounce-back in her team tonight. It was their first match since the highway accident the team bus was involved in last week, which shook the team as well as the community.

“The motivation for the team tonight was ‘show me some resiliency,’” Hunt said. “And I think we did.”

As the electric atmosphere died off from the second set win, the Tommies got back into the type of roll they sustained in the first set. Although the set was tight early on, with the Tommies leading 7-6, they exploded for an 8-0 run by exploiting holes in the back end of the Royals defense with their tall outside hitters at the net. But, the resilient Royals gave their all to try and mount a comeback. After Bethel cut the lead to 23-18 late, St. Thomas closed out the set 25-18 with two kills by their outside hitters that seemingly couldn’t be stopped all night.

With their backs against the wall in the fourth set, the Royals were matching the Tommies early on with blocks from Gavic, who led the team with five, and good hits from senior Tina Hoppe. But as the set waned, the Tommies proved to be once again too much for the Royals. Sloppy returning of serves and poor communication on bumps and sets showed its ugly head in the final set of the match, epitomized by two miscommunicated bumps that were the final two Tommie points of the night. The Tommies ended up with a 25-20 set win, taking three out of four frames against the Royals.

However, in the midst of disappointment from the loss, Bethel wanted to take time to thank their seniors. Setter Bailey Israelson, outside hitter Tina Hoppe, middle blocker Karin Canakes and outside hitter Brooke Olstad were all honored before the match with flowers and a recognition ceremony, thanking them for all their years with the Bethel volleyball program.

And Hunt noticed their character more than anything else.

“They’ve made sacrifices to invest in our players,” she said after hugging her seniors in a post-game huddle. “They wanted to make an impact on these players’ lives.”

The Royals conclude their regular season with three road games, beginning with tomorrow’s tilt at Macalester College at 3 p.m.