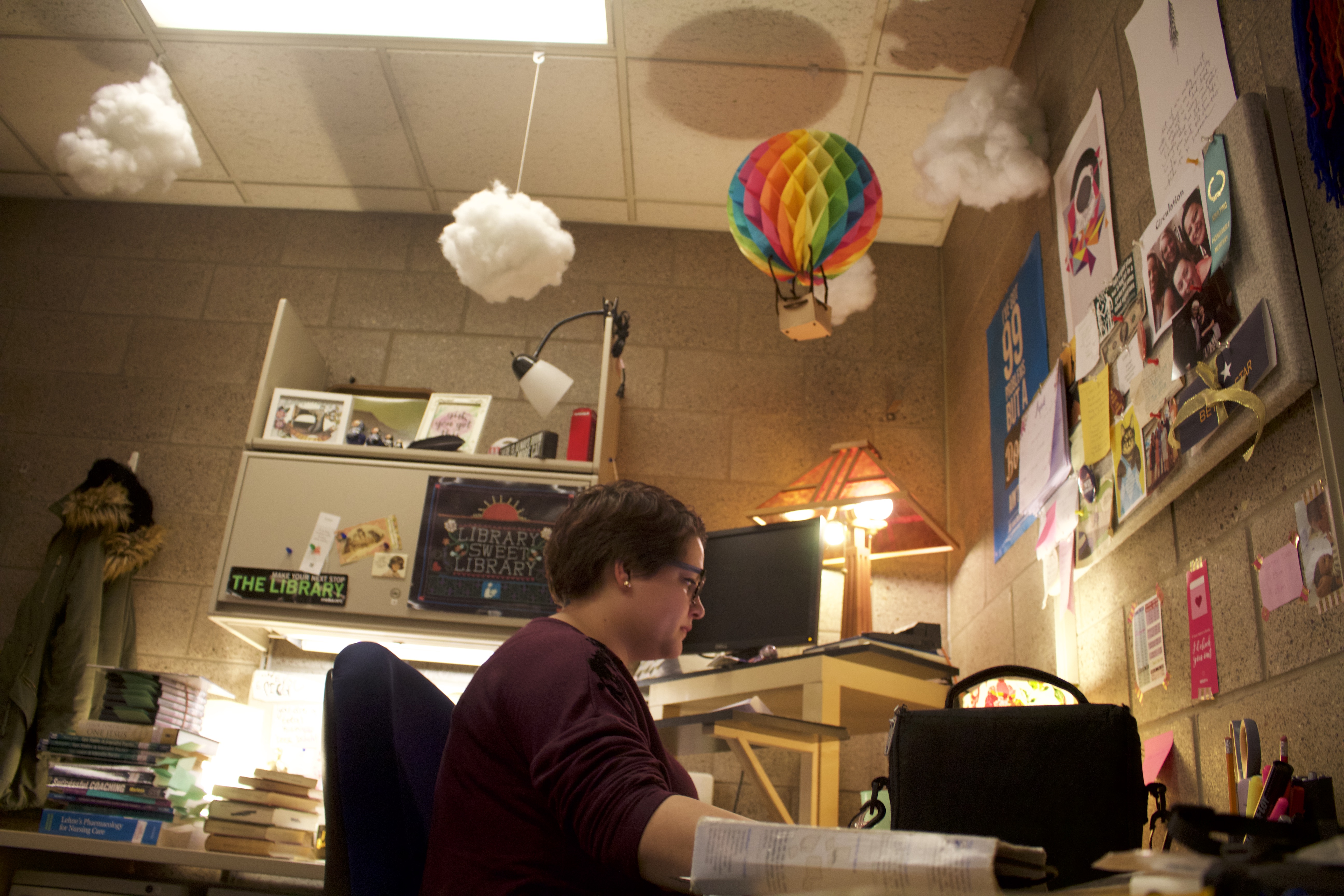 How the library is processing a week after Erica Ross leaves

What once was an office covered with clouds of cotton and a paper-crafted hot air balloon that hung from the ceiling is now empty with little remaining but thumb tacks and some filing folders. The office of Erica Ross, Bethel University Library’s Public Services Manager, was decorated by student workers summer 2017 to celebrate Ross’ return from maternity leave.

It has been one week since Ross left the library to take a position as the new Access Services Manager at Mayo Clinic Libraries in Rochester, MN where she will be serving Mayo physicians, students and staff. Ross starts her new position on Monday, Nov. 5.

Ross, 29, started working in the Bethel Library in 2007 as a student worker while she majored in psychology. During her sophomore year, she decided that she wanted to pursue becoming a librarian.

“Not necessarily because of the books, which a lot of people do love,” she explained, “but because of the people and that everyone’s mission in the library is to learn and to discover.”

It is no lie that the best part of Ross’ job was working with her students and the love and care that she showed to them. Many student workers would stop into her office to say hello, share personal anecdotes and Erica would share her life in response without a beat of hesitation like an open book, pun intended.

Senior Eveline Tcacenco, a third year student worker, remembered when she was having a rough time last year and her job performance was suffering because of it. She walked into Ross’ office with the fear of losing her job, but what she received instead was a hug, a handful of tissues and kind words of concern.

“Erica always saw us as more than employees or students… She has a way of effortlessly creating a comfortable and warm environment that we all loved being a part of,” Tcacenco said.

Kaylin Creason, a workmate in the library, can attest to the many visitors and mix of emotions from laughter to tears that passed through Ross’ office.

“(Students) would often pop into her office during the day to chat, ask for advice, or give her a life update,” Creason said. “She really connected with them, and I know she was a constant source of encouragement, support and love in their lives.”

David Stewart, the director of the library and one that Ross calls as her mentor, described the effect she had on the library in one word: mirth, meaning gladness or gaiety as shown by or accompanied with laughter.

“It intrigues me how libraries can take on the personalities of the people on staff and in Erica’s case this was a big win for us,” Stewart said.

It has been a difficult week for the Bethel library staff and student workers with the now empty position. It’s a little quieter, there’s less laughter than usual and one less person to greet in the morning. The change has required the act of shape-shifting and extra effort from the staff to cover one of the most fundamental jobs in the library: managing the student workers at the front desk.

Although, Ross left an exceptionally detailed guide on how to do her job as well as an incredibly trained team of student workers, Creason admits that as she predicted, it’s proving difficult “doing library life” without Ross.

For some student workers like Tcacenco, Ross’ absence has left them in a stage of grief this past week.

“I don’t want to sound overly dramatic, but I think in some ways, we are grieving a loss. The library will never be the same without Erica’s colorful, warm energy. I think a lot of us feel a bit disoriented,” Tcacenco said.

Ross lives to make a difference in people’s lives on the personal scale.

“I’ve had conversations with people in my life that were totally, ‘That was the moment that things changed for me!’ and I want to be able to have the same effect on people in that way,” Ross said. “That’s the way I want to change people’s lives, by encouraging through conversations.”

Her efforts to establish relationships with student workers have resonated with many. Days prior to her last day, students organized a gift for Ross: a booklet containing handwritten letters as a last word of thanks.

Ross has some words in response.

“I was so eager to dive into all those letters,” she said. “I read through all the thoughtful, hilarious, encouraging and vulnerable messages. It made me overflow with joy! I am so proud and honored to have had a little part in all these amazing people’s stories. I want to thank my students workers for sharing some of their lives with me. They all touched my life in amazing ways. They are the hardest thing to leave behind. They will always be my team.”

0 comments on “An empty office where laughter once resided”