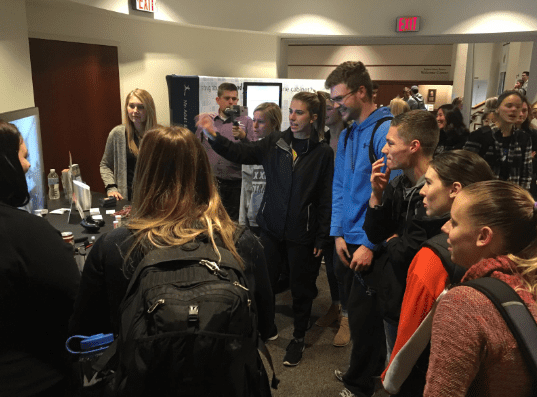 Ramsey County Coalition and more than 16 local organizations host event to raise awareness and promote services to help with addiction.

Bethel hosted A Night To Know The Truth, a presentation about drug misuse by teens, specifically the growing opioid crisis in Minnesota Thursday night. The event featured a variety of speakers including police officers, former addicts and concerned parents.

Around 100 people attended the main event in Benson Great Hall while others wandered through the lobby. Several stands had been set up by local organizations that offer drug abuse treatment. Minnesota Adult and Teen Challenge, whose members spoke for most of the night, was one of these booths.

Commander of the Violent Crimes Task Force in Ramsey County Ryan O’Neill, presented some alarming statistics he gathered from fellow police officers around Minnesota. The audience looked up toward the front screen, shocked by numbers showing the methamphetamine dilemma the police were facing.

“138 pounds we recovered last year for the whole year,” O’Neill said. “As of September this year, we recovered 438 pounds of methamphetamine.”

Although those statistics represent Ramsey County, officials are finding similar numbers on a statewide level. And the people responsible for transporting it are only getting smarter about hiding it, putting it in car tires and mailing it through UPS.

“The more we figure things out, the more creative they get,” O’Neill said.

Victims of drug abuse also spoke at the event. Lamonte was one who shared his story with the crowd. He was in junior high when his friends first convinced him to get involved with drugs. While he didn’t think of himself as addicted, Lamonte said it slowly began to dominate his life.

Marijuana started to take priority over school, sports and family. Lamonte received a full scholarship to attend the University of Minnesota and play football, but he was kicked off the team due to his new lifestyle.

The crowd hushed as they focused intently on everything he had to say. As he shared his story, Lamonte moved around the podium to face the audience. His problems only got worse after college when he started chasing more drugs and stimulants. It was his mother who begged him to get help.

Lamonte was proud to announce that as of Nov. 2, he is one year sober.

The presentation continued with shared stories from families of drug abusers. After Know the Truth member Amber Hewitt spoke about her own struggles with addiction and how it affected her life, her mother Sally came forward as well.

She recounted what it felt like for her as a mother to deal with this news: her daughter was lapsing into drug addiction. Sally explained how guilty she felt for not noticing the issues sooner. She couldn’t understand everything her daughter was going through, but was proud that she fought through it.

“I have no idea the demons that she fought over that year, but I know she won,” Sally said.

Many of the speakers had one common suggestion for students who wanted to help: start talking about the problem.

“The problem is when we don’t talk about it,” Amber said. “The problem’s not going to go away if nothing changes.”

0 comments on “A Night to Know the Truth”