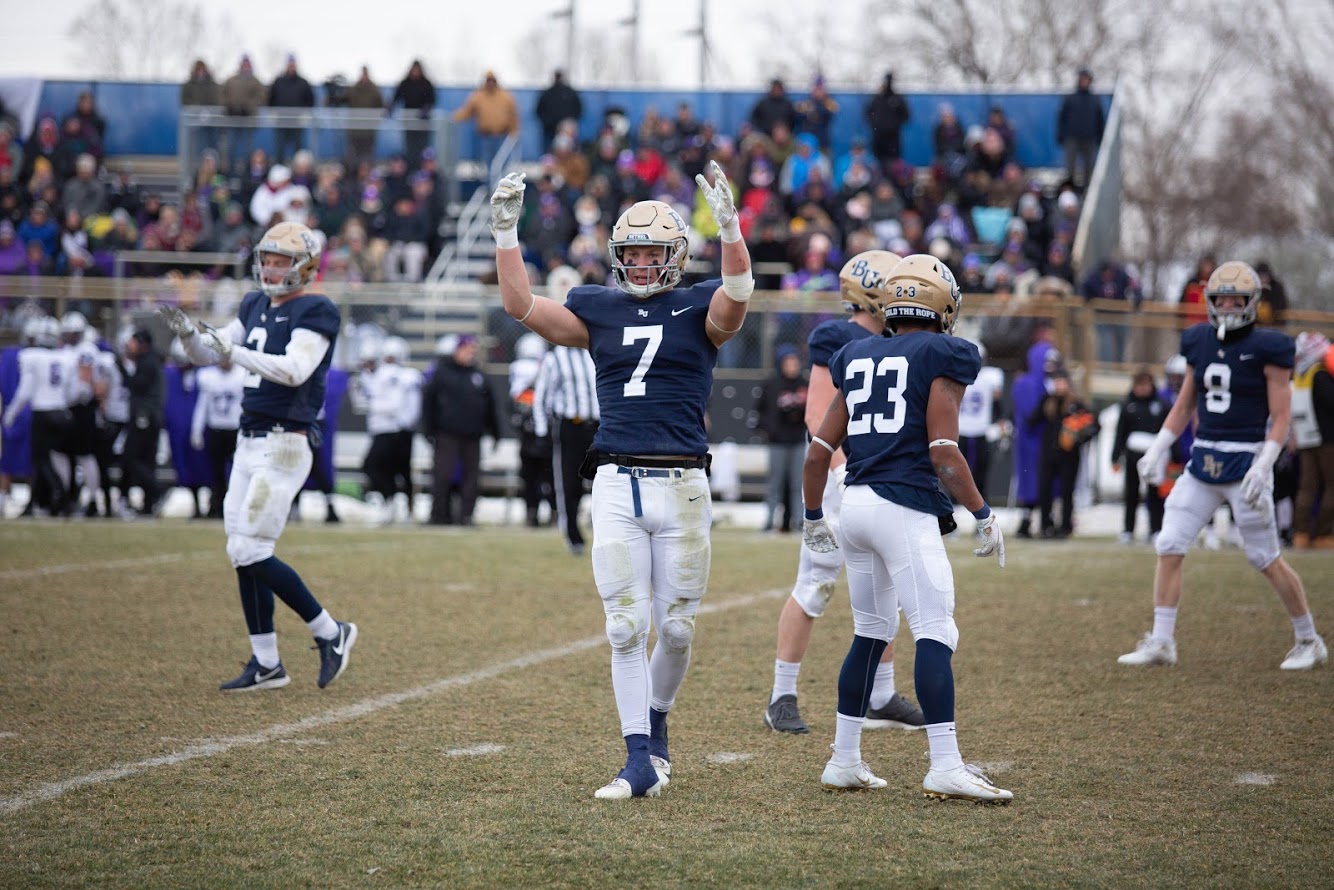 Jumping up and down at a football game in 20-degree weather is a common occurrence, but Royal Stadium wasn’t going bonkers because of the frozen conditions.

The Bethel University football team (9-1, 7-1 MIAC) flew around on offense, defense and special teams en route to a victory over the University of St. Thomas (8-2, 6-2 MIAC) on Saturday. The win all but secures an NCAA playoff at-large berth for Bethel, and likely knocks the Tommies out of the postseason picture.

The Royals were paced by the running game early on. Their first drive culminated in a 41-yard scamper by running back Sam Gibas. The sophomore carried 18 times for 72 yards on the day.

After a quick three-and-out stop by Bethel’s defense, the offense was pinned down inside the 10-yard line for their second possession; enter quarterback Jaran Roste into the fray. He burst through the line untouched and found the end zone 93 yards later to put the Royals up 14-0 just seven minutes into the contest. Roste rushed for 129 yards and threw for 177 more in the air.

“We wanted to establish [the running game] really quick, and we did that,” Roste said after the game. “Sam and I took advantage of some of those holes, and we ended up scoring two touchdowns which kind of made the difference in the game.”

The second and third quarters were stalemates; defense held tough on both sides throughout the middle frames. When Bethel would make a big play—such as cornerback Trey Anderson’s diving interception—UST would answer with a stiff defensive possession.

According to head coach Steve Johnson, the expectation defensively all week mirrored the gameplay. “We felt like we could shut them down,” he said. “We felt like we had to stop [UST running back Josh] Parks, and we did that. We’re playing so great on defense: fast, sharp and smart.”

When the fourth quarter began, the scent of upset began to waft into the stadium like the smoke from the concession stand grill. Right on time, Bethel defensive end Kyle Kilgore ripped into the Tommie backfield to block a punt and linebacker Trent Substad scooped the ball into paydirt.

The Royal lead was extended to 21-7, and despite a late touchdown pass that made the score 21-15, Bethel held onto the ball and kneeled into victory formation.

The win marks the first time Bethel has defeated St. Thomas since 2014. The Royals were outscored by the Tommies in their last three meetings by a total of 130-41.

Coach Johnson echoes every week how proud he is of his team, but the postgame speech on Saturday was a little more teary-eyed than usual.

“We have a tremendous group of guys and leaders. I half-joke that when I grow up, I want to be like them, but it’s true,” Johnson said. “They care about each other, they love each other, and they hold each other accountable.”

Bethel awaits the NCAA Division 3 football selection program tomorrow afternoon, when they will learn their placement in the NCAA tournament that begins next week.