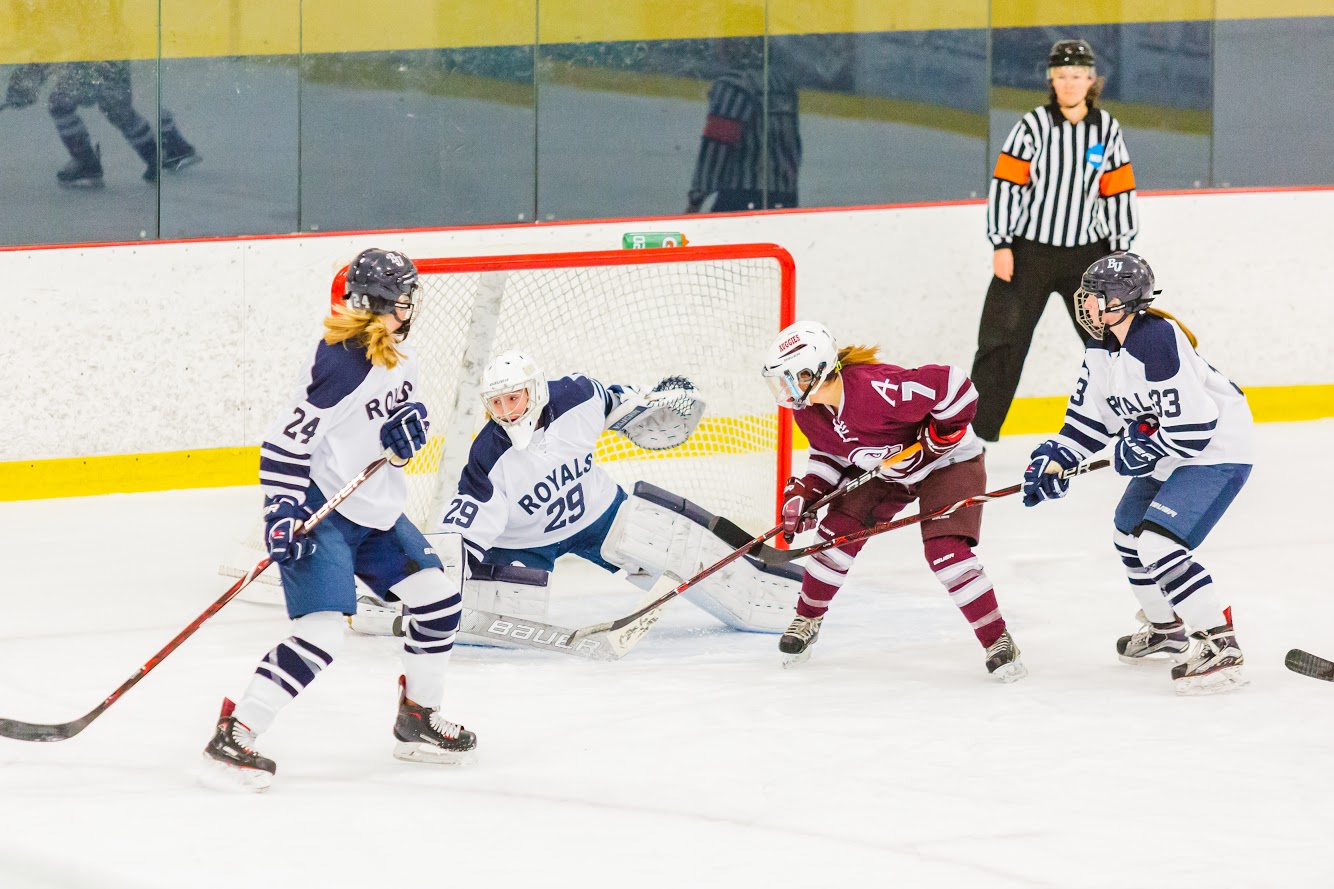 Behind aggressiveness and energy, Auggies roll to win over Royals in MIAC opener

As the temperatures Friday evening were dropping outside, the intensity of MIAC hockey was rising inside the Bethel University Arena at the National Sports Center in Blaine.

The Bethel Royals women’s hockey team opened their MIAC portion of the schedule against the Augsburg Auggies in a game brought out a well-attended crowd to support the hometown Royals.

From the opening puck drop, Augsburg came out with a high level of intensity and energy. Combined with sloppy play from the Royals defense by not getting the puck out of their zone, all the momentum was with the Auggies in the early stages of the period. As Augsburg was flying down the ice looking for scoring opportunities, freshman Royals goaltender Mallory Tidona played a stellar first period, saving 8 shots.

However, the Auggies got on the board first after a relentless series peppering Tidona with shot after shot. The Royals defense held its own on the second Augsburg power play, eventually leading to a fast break with sophomore forward Bri Stafne gaining the puck straight out of the penalty box and scoring the game-tying goal for the Royals. The score remained tied 1-1 as the first period concluded and the Royals looked to continue the last-period momentum.

And to begin the second period, that momentum would be tested. The Auggies began the period on a 4-on-3 power-play and after the initial two minor penalties were up for both teams, Augsburg used the remaining power-play time to their advantage, striking back and reclaiming the lead 2-1.

That began the resurgence of energy for the Auggies in the period.

By forcing a Royals turnover in the attacking zone, the Auggies were gifted another scoring chance that they capitalized on again, extending the lead to 3-1. As the time of possession was overwhelmingly in favor of the visitors, they got yet another chance to add to their lead late in the period and capitalized once again. Before the Royals could blink, the lead had gone to 4-1 at the end of two periods.

As the hopes of a comeback dwindled, any momentum that Bethel was looking to ride in the third period needed to come quickly. But those hopes were snuffed out by the aggressive Auggies, who never took their foot off the gas pedal. They added two goals in a span of two minutes, adding to their already impressive lead. The Royals did get one back late in the third thanks to junior forward Bailey Thompson, but it was too little too late.

The Auggies rolled to a 6-2 win and started the Royals’ conference schedule with a loss.

However, Thompson hopes that late goal and her overall play will give the team and herself some more confidence down the road.

“We’re applying the things we learned in practice,” Thompson said. “For me personally, I want to get those shots blocked on the penalty kill and continuing playing with more tenacity.”

Stafne led the team with two points, a goal and an assist, and sophomore Sydnee Hanson chipped in with an assist as well. Tidona also racked up 29 saves in her MIAC debut.

The Royals drop to 1-3 on the year, with a rematch against the Auggies tomorrow. They then travel to face UW-River Falls on Tuesday.