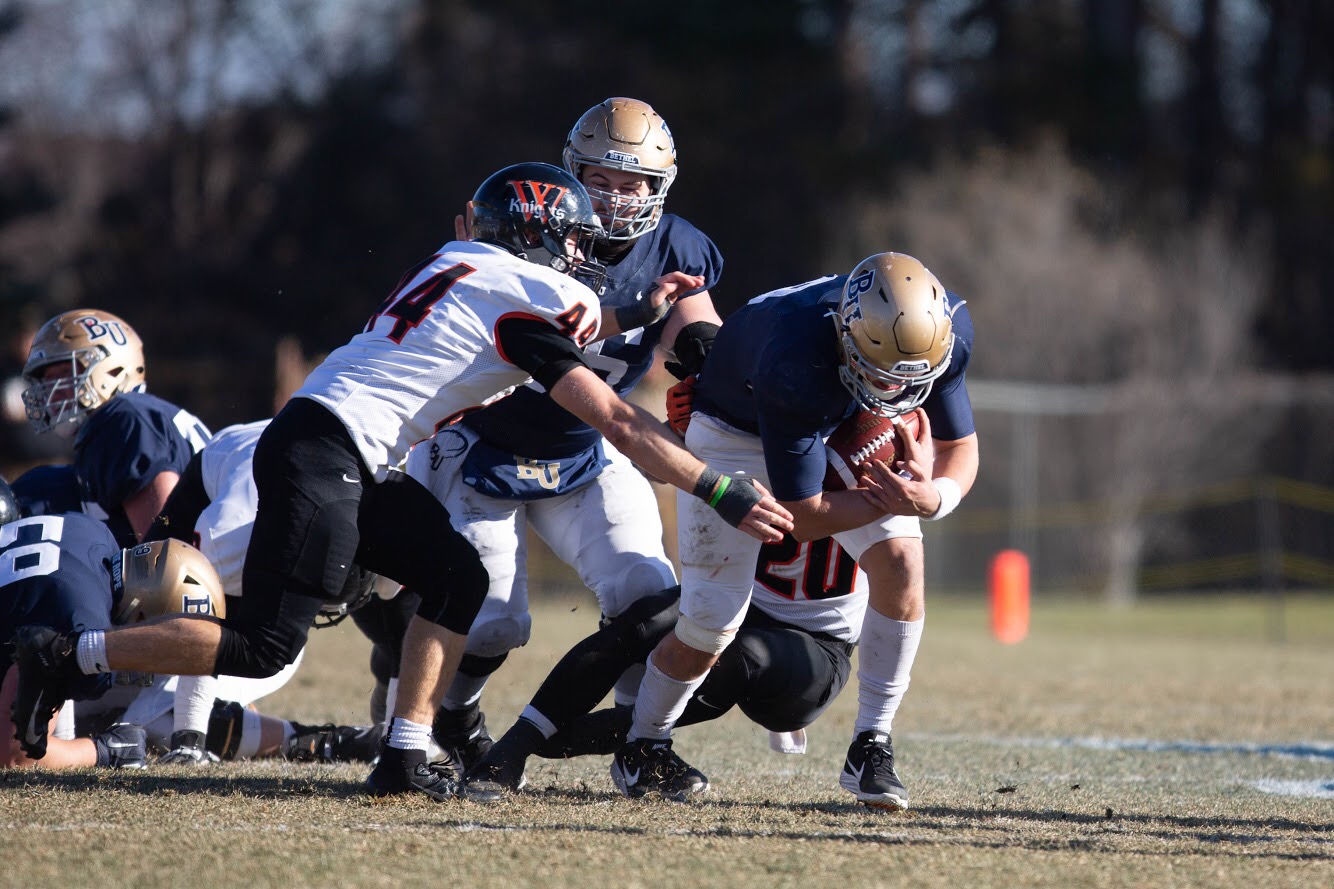 Jaran Roste made his routine read on an option run and 15 seconds later found himself in the end zone. That’s been a common occurrence and a point of emphasis for the dominant Bethel Royals offense.

”It starts up front with us,” the freshman quarterback said after the game. “Our offensive line does a great job of creating holes for our guys to run through.”

En route to a 41-14 thrashing of Wartburg College in the first round of the Division 3 NCAA playoffs, Roste and the Royals rushed for 387 yards and added 47 through the air. A handful of explosive runs padded the 35-0 lead Bethel built by the halftime break.

Wartburg head coach Rick Willis knew the kind of fight the Knights would have to be in against Bethel, having faced the Royals multiple times in the regular season and playoffs over the last decade. “We couldn’t really stop them from running the ball the way we had stopped people all year and we certainly had huge problems protecting our quarterback. Those were two of the keys we knew we had to do to have a chance to win the game and we weren’t even close to doing either,” Willis said. “I think a majority of that is a testament to the quality of Bethel.”

The strong first half can’t be solely credited to the offense, though. Bethel’s defense forced two turnovers, both by way of interception. Junior linebacker Kyle Peach put the game into a comfortable position with two minutes left in the second quarter when he tipped a pass, corralled the ball and sprinted 75 yards to a touchdown.

The Bethel defensive line came to life in the second half and finished the contest with a total of 10 sacks on star Wartburg quarterback Matt Sacia. As the game winded down and the fourth quarter was paced by second-string Royal offense to run out the clock, cheers erupted from the home bleachers—a playoff win in Arden Hills hasn’t happened since 2013.

Overall, Bethel’s offense held true to form on Saturday. Roste scored three times on the ground along with 154 yards on 10 carries. Sophomore running back Sam Gibas tallied 109 yards on 18 carries. Playing both offense and defense, Mike Delich shined in the backfield every so often and reached the end zone twice himself.

The Bethel contingent heads down to Naperville, Ill. next weekend to face North Central College of the CCIW conference. North Central defeated the Royals in the national quarterfinals in 2013.

As for the week of preparation, head coach Steve Johnson has a plan mapped out that includes some Thanksgiving festivities.

”We’ll go Monday and Tuesday with regular practice, then on Thursday, football in the morning is an American tradition. We invite the parents out to practice and have hot chocolate,” Johnson explained.

The team will depart for Naperville on Friday morning, gearing up for their Saturday afternoon tilt. “North Central is a great football team, a great tradition,” Johnson said of the next opponent. “They’re a great challenge and we’re excited to go down there.”

Stay tuned for more information regarding the game next weekend.