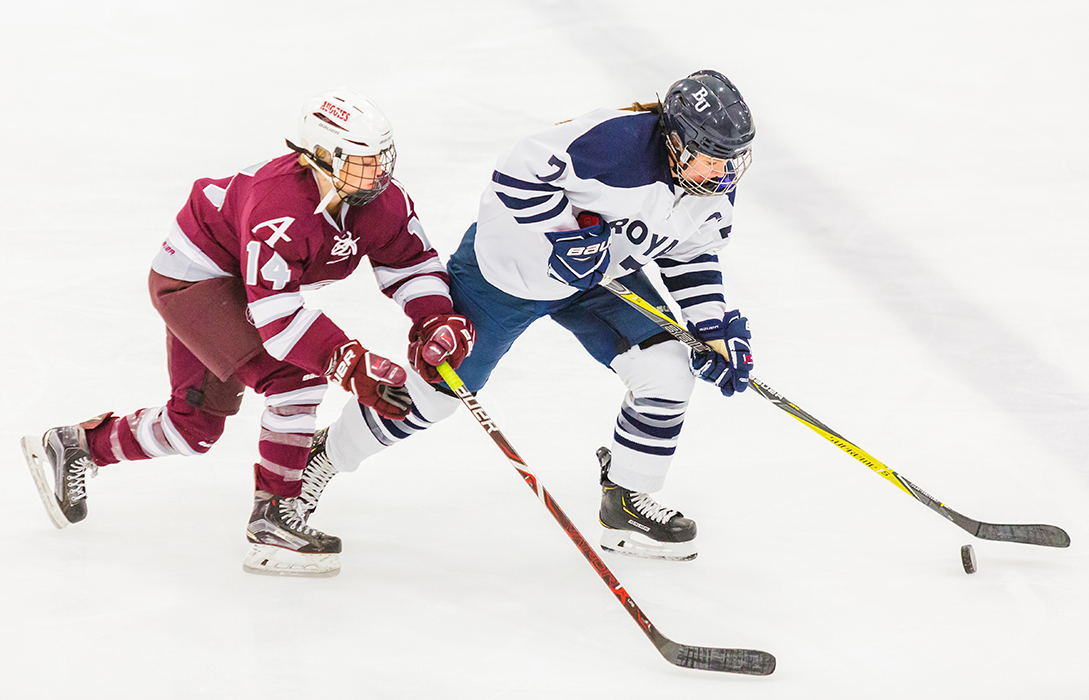 What it feels like … to get checked into the boards

The puck soared off the Bethel University hockey player’s stick and headed straight for the boards. The referee’s whistle was about to stop the play with an icing call. Unless, the puck could be stopped. Sarina Goos, a senior forward, skated across the ice as fast as she could. She was neck and neck with her opponent in an all out sprint.

“I was just looking at the puck, trying to get there and beat her out, when all of a sudden I was on the ice,” Goos said.

Despite the rules of the game which state checking is not allowed in women’s hockey, she took a hit from the Wisconsin-Eau Claire player.

After being slammed, Goos lay on the ice, assessing the damages. Her attention went straight to her knee, which had taken the impact of hitting the boards. At least she had drawn a penalty, she thought.

“My knee was a little swollen the next day,” Goos said. “I was a little angry, I guess, because I know it was not clean. It was dirty.”

Goos did not feel the urge to retaliate, checking is sometimes part of the game.

What it feels like … to get in a hockey fight

The opponent stood 6 feet, 5 inches tall and 240 pounds. He lined up against Nick Eytcheson for the face off. Eytcheson says he said under his breath that his opponent better stop taking cheap shots. The opponent looked at Eytcheson and said: “What are you gonna do about it?”

At that moment a fight-or-flight instinct raced through his mind. He decided to fight. He had been called out, and now he had to back up what he was saying. As soon as the puck dropped, they let their gloves fall to the ice and grabbed ahold of each other. Their hands locked and Eytcheson experienced an overwhelming feeling of fear. The other player was bigger and had a longer reach, so Eytcheson was afraid that he would get hit easily and not even be able to reach him.

Immediately after the fear surfaced, it was gone. Instead, rage and anger overtook Eytcheson. He was willing to get hit in the face as many times as it took to put the other guy on his back. They spun around and around for 50 seconds, trading punch for punch until the 6 foot 5 inch player hit the ice. Eytcheson stood over him. He thought justice was served.

Usually, he says, fights break out when the one team did something the other team didn’t like. When a player decides to fight, he doesn’t want to let teammates down.

“Getting into a fight means putting your pride on the line,” he said. “You have to make that decision and take the consequences. Usually you’re fighting for what your team represents and you don’t want to risk losing that.”

Haylee Barker didn’t know what to expect. Leaving the University of North Dakota to play basketball at Bethel University was a big swing.

“I thought that since it was D3 it wouldn’t be such a big commitment,” Barker said.

Barker said she struggled to balance work, school and basketball at first. Missing conditioning, workouts and practices for work was not easy for a player struggling to fit in on her new team.

“Being a very vocal person, it was so hard for me to be in practice and not tell people what to do,” she said. “I couldn’t tell my teammates what to do because I didn’t know the system yet.”

Barker recalls a time where the team was playing Macalester and Barker messed up a defensive play, provoking the coach to bench her. Barker became increasingly upset, causing the coach to tell her to clean up her attitude or sit on the bench. Barker got so upset that she had to go stand underneath the bleachers during the game to calm down.

“I definitely still have some of that attitude, but I deal with it better now.” Said Barker with a chuckle.

“I am really looking forward to this season and building relationships with my teammates and coaches.”