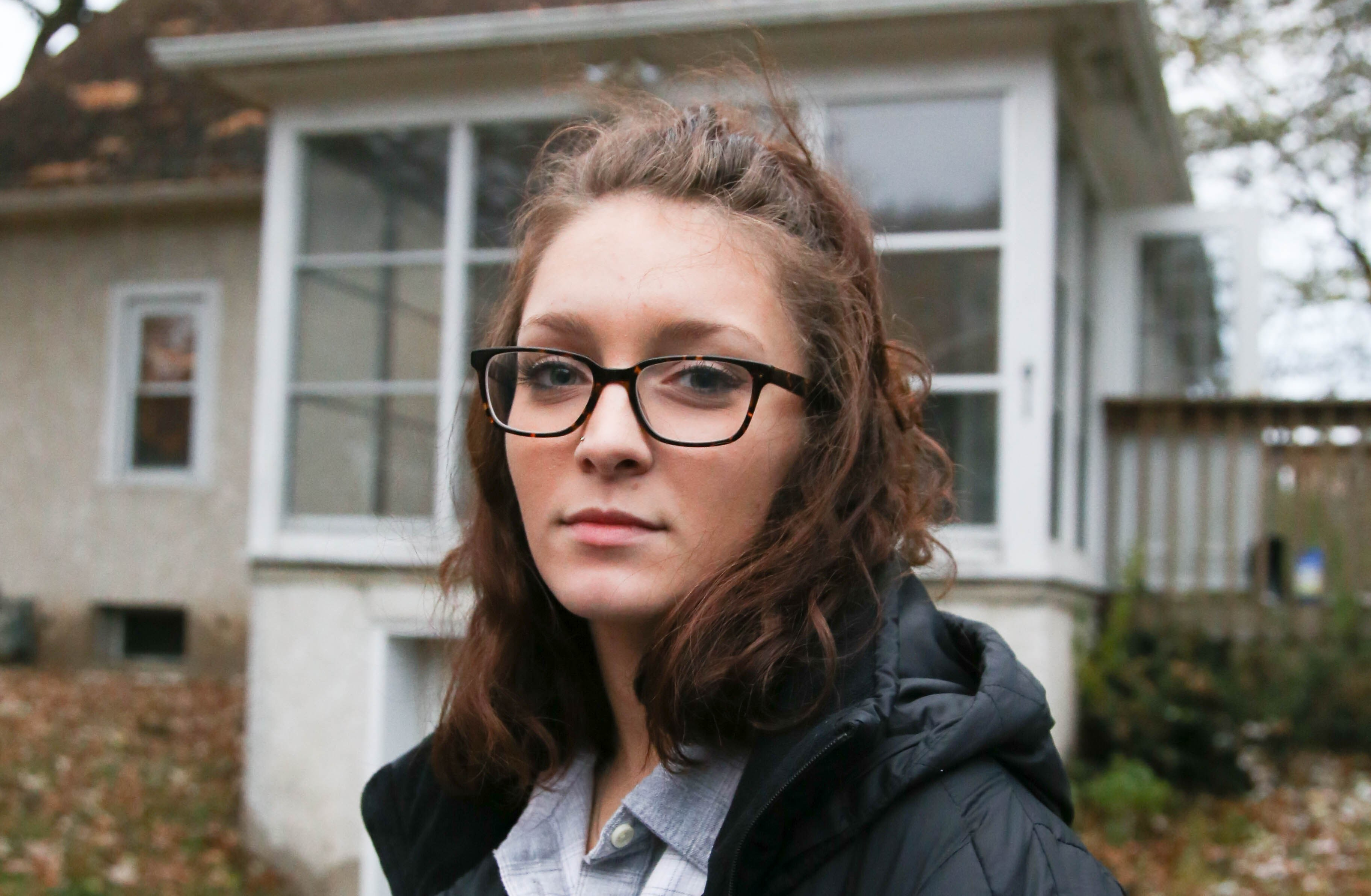 Bobbie Jo Chapkin started a street ministry in the North Minneapolis community to reach the marginalized with love and the message of Christ.

Bobbie Jo Chapkin rushed toward Merwins Liquor on West Broadway Avenue in North Minneapolis, yards from Sanctuary Covenant Church. A woman with long black braids, Tatiana, emerged from her car. Upon seeing Chapkin, a smile appeared on the woman’s face. BJ, her nickname for Chapkin, cares.

Chapkin, a Missional Ministries and Digital Humanities major at Bethel, knew right away what the goal of her Digital Humanities capstone would be.  She wanted to do an internship allowing her to work with people living on the margins, a place she knew very well. This passion led her to work with Sanctuary Covenant Church on Broadway Avenue in North Minneapolis, a community shrouded in stereotypes.

“I wanted to shed some light on what it’s really like, show that there’s a lot more beauty to the area,” Chapkin said.

Having lived in and out of homelessness throughout her teenage years, Chapkin understands the challenges these people face better than she might have hoped.

“Parents would come in and out of the story throughout my life and so I never really had a stable environment,”  Chapkin said.

With a shaky home situation, Chapkin was left in the hands of her grandmother as a child, a women who taught her a passion for baking and her first glimpse of God.

“My grandma is my best friend,” Chapkin said.

But even with her grandmother’s care, Chapkin still faced troubles in her home life.

Thirteenth birthdays are meant to be an initiation into teenhood, the freedom to watch PG-13 movies without parental guidance. When Chapkin turned 13, she had an ice cream cake dropped off by her dad before he went to the bar. She cut her own cake.

Chapkin went to three different middle schools and later, two different high schools. These changes, along with her parents’ divorce, caused Chapkin to grow up quickly.

Chapkin is the first student in the digital humanities program to complete an internship, and she has driven the process from start to finish. She also will be the new program’s first graduate.

Chapkin’s project focuses on profiling individuals she meets around the church. During her internship, Chapkin visits the Sanctuary Covenant Church every Monday and Friday from 1 p.m. to 3 p.m. She walks along West Broadway and through the nearby neighborhood with Mike Hotz, the associate pastor of care and outreach, or church member and Bethel alum Steve Hildebrant.

Chapkin hopes to use videography to record the stories of people she meets on her walks. She said she plans to post these videos on her own personal blog and present them on the Church’s website. She hopes that sharing their stories might help break the stereotypes held about the community.

Digital humanities professor Charlie Goldberg calls Chapkin “the bravest student I’ve had.” Initially, she was aware that working with technology was not one of her strengths. She chose to pursue the major anyway because she saw its usefulness in telling stories.

Now, she is using the tools she has learned through her time in the program to tell the stories of an often neglected community.

Hotz says  Sanctuary Covenant Church has engaged in the community for 16 years, but Chapkin’s walks were something she started on her own three months ago. For a church striving to practice true neighborly community, Chapkin’s practice is important to establish relationships outside of the typical Sunday church setting.

“Through the careful listening of Bobbie Jo and Steve, we’ve seen subtle changes in how the church is perceived,” Hotz said.

Hotz said many people on the streets near the church are viewed as a threat by those living outside the community. People neglect or ignore the area due to its high crime rates and make assumptions about the people living there. Simply walking and taking time to hear their stories is a humanizing act and reflection of the love of Christ, Hotz said.

“I love walking around there, I love interacting with people,” Chapkin said. “They are actually beautiful and have incredible stories that are so worth hearing.”

Travis, one of the community members Chapkin interacted with on multiple occasions, was raised into a life on the streets. He joined gangs, not because he saw it as the best option, but because that was the only life he knew.  After ending up in jail for 22 years, he decided to turn his life around and join an 18-month Bible program. Chapkin says is now on fire for the Lord, has a job and is trying to rebuild his life again.

Mimi, a woman Chapkin always runs into on her afternoon walks, watches over one of the Metro Transit stops. She is always at the same stop and watches over it like a mother would her children. Chapkin said a young homeless girl named Lydia hangs out at the stop as well. One night, Lydia was all alone. Mimi sat with her the whole time to keep her safe from the dangers of the streets.

“I’ve never seen community done better than in that neighborhood,” Chapkin said. “They raise their children as a village.”

Chapkin and Hildebrandt walked past Used Mattresses, a McDonald’s and store fronts boarded up with plywood. MetroTransit bus stops sprinkled the road, offering shelter: a man and a woman with worn suitcases, a group of droopy-eyed men.

Hildebrandt approached two men standing near the bus stop. The minute he mentioned his affiliation with the church, one man turned his back.

“My goal isn’t just to help people see them better, but hopefully they will be able to see us better,” Chapkin said.

Through her ministry, Chapkin hopes to break through these stereotypes to promote the simple notion of loving people better. Much of that idea stems from her faith in God.

Journey to the person she needed

Early on in high school, Chapkin was the person who would go to parties every weekend, wanting to fit in. During her sophomore year of high school, she looked around and realized she never saw these people outside of the parties. Chapkin said God distinctly told her this wasn’t the person he wanted her to be. He had better plans for her.

It was her last party.

Walking through the neighborhood, the North Minneapolis community differed from the bustle of West Broadway. A quiet breeze drifted through the streets and leaves blew across the pavement.  Chapkin smiled, noting how beautiful the old houses were and how she hoped to live in that neighborhood one day.

Along the still road, a car was parked, full to the brim with clothes and belongings, a place Chapkin found herself part way through her senior year in high school.

After deciding to follow Christ, Chapkins’ relationship to her parents became worse. According to Chapkin, her parents thought she was putting her faith ahead of her family. So, she decided to sneak her belongings from her parents’ home late at night and live out of her car.

Chapkin knew which parking lots were safe to stay in overnight and she sometimes used the school locker room showers very early in the morning. When she could, Chapkin couch surfed at friends’ houses.

She didn’t have a stable place to call home.

In high school, a club adviser told Chapkin to grow up to be the person she needed, a phrase that shaped the future she wanted. Chapkin was stereotyped. She was called lazy, told her situation was self-created and she was going nowhere in life.

Chapkin knew that getting a college education was important, but she never thought a private college like Bethel was an option because she planned to pay for college on her own. However, after talking to a school counselor, she discovered her assumption wasn’t true.

“I fell in love with the campus and the community,” Chapkin said.

Along with being a Bethel student, Chapkin works for Lifepoint Church as a building maintenance worker. With this job, she was given a a 106-year-old house to call her own and decorate as she pleased. This is her first stable home

“It’s liberating to have a space, and it’s stable,” Chapkin said. “I know it’s going to be here, I can fully unpack, and it’s mine.”

Chapkin was lucky. With a will through Christ and some help along the way, she was able to to begin living the way she felt called to.

However, many people, like Travis, grew up into the street lifestyle and don’t no how to get out of it. Others don’t know how to go about getting a job and some are rejected simply because they have no place to get a hot shower.

A call for change

For Chapkin, change starts with self-examination. A person’s background morphes their perspective on the world.

“We have to realize our own biases come in [from] where we grew up – the family, the church, location – things like that all have an influence on us,” Chapkin said.

It’s important to recognize everyone is a child of God and that each person carries their own baggage of biases or hurt, she said.

Tatiana, a former meth addict, explained to Chapkin and Hildebrandt how she lost a child and was trying to get medical assistance but nobody would help her. Her husband stole her ID and disappeared. She was rejected everywhere she went to get help.

Now, she has been riding the bus, eating and showering whenever she gets the chance. She suffers from multiple medical conditions that, without treatment, she says will kill her. Through it all, she prays to God every day.

Chapkin and Hildebrandt grasped hands with Tatiana in front of Merwin’s Liquor, the most dangerous place on West Broadway, and bowed their heads in prayer.

“For me, it’s wanting to get to know what the people are really like,” Chapkin said.

0 comments on “Becoming the person she needed: From homelessness to Street Ministry”